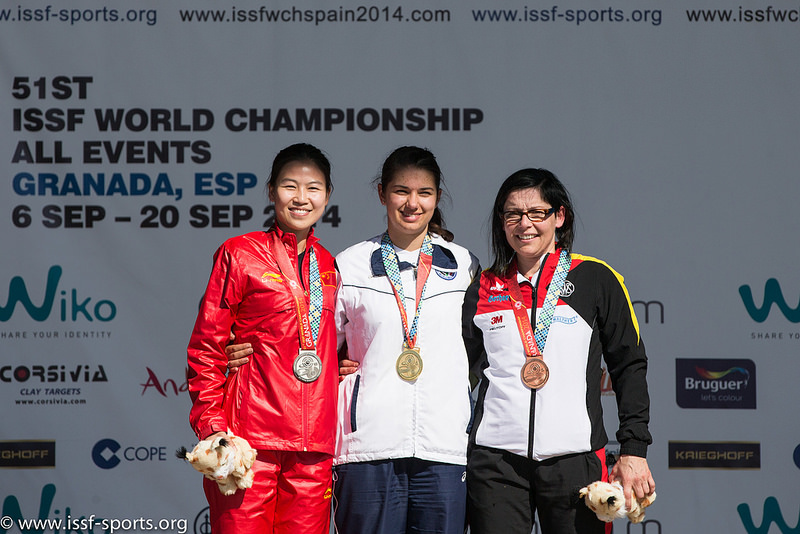 Two gold medals and four Quota places for the Ganes of the XXI Olympiad in Rio-de-Janeiro were won by the European athletes in the second day of competitions at the 51st ISSF World Championship that is taking place in Granada, Spain.

The first set of medals was disputed in 50m Pistol Men Junior. Andrey Pochepko from Russia won the first-ever final-format in junior events at the ISSF World Championships. His result in the Final is now the World Record for Juniors. The runner-up in this event was Pario Di Martino from Italy who got the silver medal. There were three more European in the Final: Alexander Bassariev from Russian who finished on the 5th place, Rafael Blaszkiewicz from Poland who finished on the 6th place and Zaven Igityan from Armenia who finished on the 7th place.

The big winner of the day was Petra Zublasing from Italy who became the World Champion in 10m Air Rifle Women. Sonja Pfeilschifter from Germany won the bronze medal leaving the second place to Yi Siling from China. Andrea Arunovic from Serbia finished on the 5th place and Stine Nielsen from Denmark finished on the 6th place. Both, same as the medal winners, obtained the desired Olympic Quota Places.

In 50m Pistol Men only Pavlo Korostylev from Ukraine among the Europeans managed to become the finalist and to get the 5th place that brought him the Olympic Quota Place. The winner in this event was 3-times Olympic Champion Jin Jongoh from Korea who broke in Qualification the 34-year World record.