SLOVAKIA WON THE FIRST EVER MIXED TEAMS EVENT IN SHOTGUN 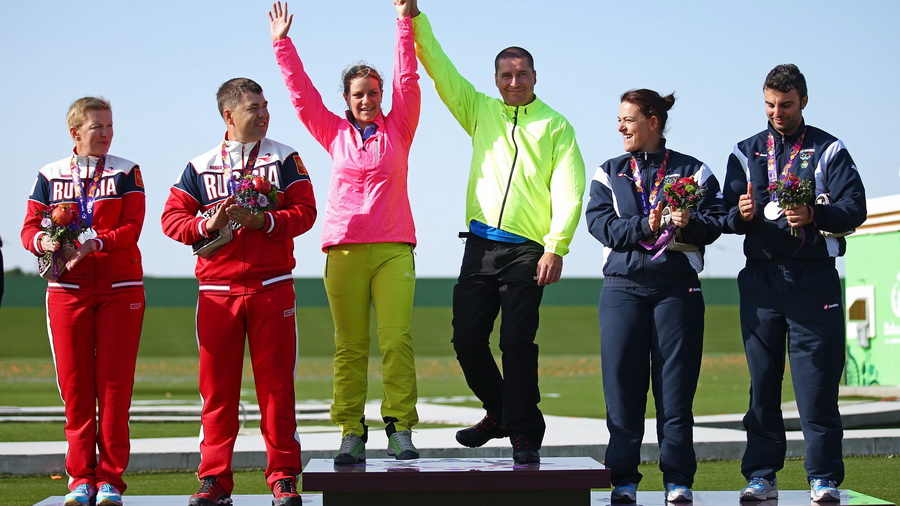 The duo from Slovakia composed by the current World Champion Erik Varga and the two-times Olympic silver medalist Zuzana Rehak-Stefecekova won the first ever Mixed Teams competitions that were initiated by the European Shooting Confederation and included in the official program of the 1st European Games in Baku. In the Gold Match Varga and Rehak-Stefecekova were more precise than the team from Russia composed by the Olympic and European Games winner Alexey Alipov and the European Games bronze medalist Elena Tkach.

Ten duos - from Slovakia, France, Italy, San-Marino, Germany, Russia, Slovenia, Turkey, Spain and Azerbaijan - took part in the Mixed Teams event in Trap. Six of them proceeded to the Semifinals after the Qualification round in which each of the athletes had to make 50 shots.

In the first Semifinal Slovakia hit 28 targets out of 30 (15 done by each shooter), Spain - 24. The Italian duo composed by the Olympic Champion Jessica Rossi and Massimo Fabbrizi was eliminated after 20 shots (10 done by each shooter) with the total of 14 hits. Russia won the second Semifinal with 24 hit targets, San-Marino was second with 23 and the team of France composed by Carole Cormenier and Antonin Desert was eliminated after 20 shots with 14 hits.

Alessandra Perilli and Manuel Mancini from San-Marino won the Bronze match against the European Games champion Fatima Galvez and Alberto Fernandez from Spain.