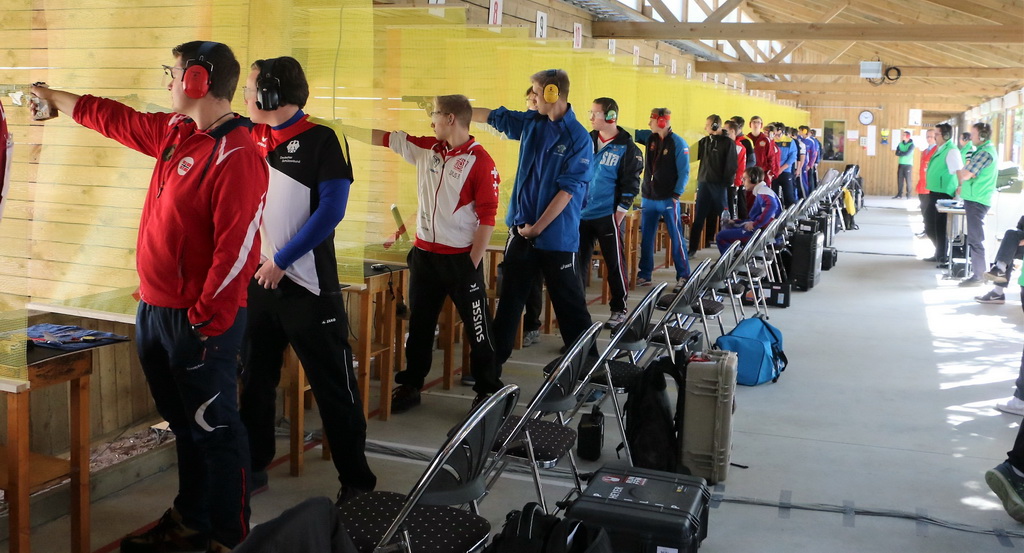 The European Championship Junior continued with 25m Standard Pistol Junior Men and 50m Rifle Prone Women Junior. The weather was as nice as yesterday: sun was shining on the bright blue sky and only mild wind was blowing. It was even hot on the ranges.

“That was a quite exciting competition for me but in the end everything went best way. I have been training about 8 hours a week. At the moment it is enough. My goal is of course to be an Olympic winner and World Champion. I’m also very happy for the team when we won the gold also in Team Competition”, described his feelings smiling Frederik Zurschmiede just before the awarding ceremonies.

Switzerland dominated also the team competition and nearly as clearly as Zurschmiede. The Swiss Team consisted of Frederik Zurschmiede (563), Adrian Schaub (556) and Marvin Flueckiger (541). The Silver medallist team was Germany (1656) before Ukraine (1654).

“Ooh I’m so happy. This is great. I have been trained and shot now for 10 years and this is my third time in European Championship. I’ll train about eight hours a week only shooting. My goals will be still in front but I’m aiming to the World Championship gold and of course I wish that I could compete in Olympic Games”, told clearly happy European Champion Jenny Vatne.

The 50m Rifle Prone Team Competition was very exciting and turned finally for Germany with the difference 0.1 points. The gold medal result of Team Germany was 1836.3 points. During the competition it looked like that France would win the gold while Sabrina Hoessel shot in to the second and third 10 shot series results 98.4 and 99.6 points. When the athletes had shot fifty shots French team sank a little bit down and German team cheered up. Behind of these two Team Finland arose strongly. German team into the fifth series result 309.1 when France shot 304.3 and Finland 308.6 points. When we compare the series we can say that it was really a battle of three equal teams.

Fourth was the Norwegian team with result 1834.0