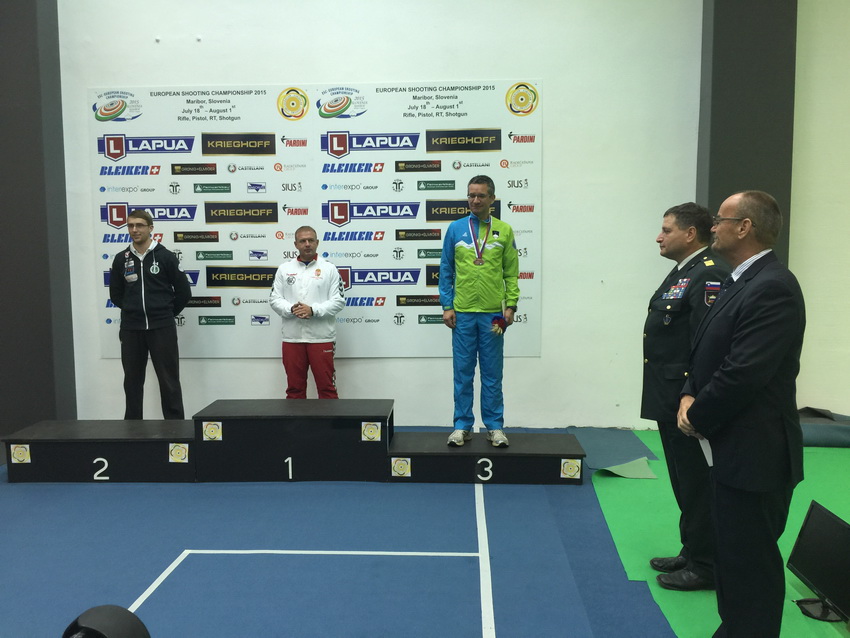 The 2015 European Championship in Maribor is over. All 71 sets of medals – 37 in individual and 34 in team events - have been awarded to the best European shooters. The total number of starts amounted to 1442 – 945 in Senior and 497 in Junior competitions. 10 World and 13 records were established during 12 days of the Championship.

The last two World and European records belong to Christian Reitz from Germany – winner of the 25m Centre Fire Pistol with 595 points and to the trio from France that was on top of the team classification in 300m Standard Rifle event with 1751 points.

Valerian Sauveplane from France (586 points), his compatriot Josselin Henry and Peter Sidi from Hungary ascended the podium after the end of the 300m Standard Rifle individual competitions.

In the team classification France was followed by Norway (1744 points) and Austria (1731 points).

Alexei Klimov from Russia won the gold in 25m Standard Pistol Men after a shoot-off with Christian Reitz. Both scored 573 points during the competitions but the Russian was more precise in the shoot-off (49-48). Roman Bondaruk became owner of the bronze medal after a shoot-off with Peeter Olesk from Estonia and Piotr Daniluk from Poland.

Dario Di Martino from Italy was the most precise participant of the 25m Standard Pistol Men Juniors event with 565 points. Clement Greffier from France finished on the second place (558 points), his compatriot Jean Quiquampoix – on the third (560 points).

The trio from France was on top of the team classification with 1666 points followed by Russia (1658 points) and Ukraine (1635).