The 2015 European Championship in Maribor, Slovenia, has gained the speed. 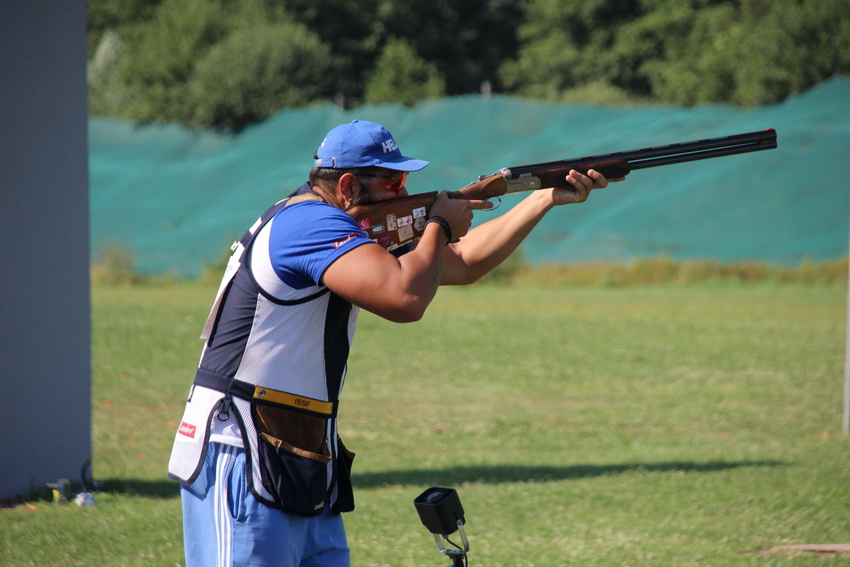 More than half of the titles in Olympic events and of the Quota Places for the Games of the XXXI Olympiad have been disputed already.

Zsofia Csonka from Hungary was a little more precise than Viktoria Chaika fron Belarus in the Gold Match of the 25 m Pistol Women (8-6) and won one of the two Olympic Quotas disputed in this event. The second Olympic Quota went to Nino Salukvadze from Georgia, 1988 Olympic Champion, who lost in the Bronze Match to Olena Kostevych from Ukraine, 2004 Olympic Champion, with 5 points to 7. The 2016 Games in Rio de Janeiro will be the eighth Olympics in the sports carrier of Nino Salukvadze!

There was only one Quota Place available in Skeet Women. It went to the winner of the event Christine Wenzel from Germany. In the Gold Match she was more successful than Danka Bartekova from Slovakia (16-14). The bronze medal was disputed between two shooters from Cyprus. Andri Eleftheriou hit 14 targets while Panagiota Andreou hit 3 targets less.

Slovakia was on top of the team classification with 214 hit targets followed by Cyprus (210 targets) and Great Britain (209 targets).

One set of medals and three Quota Places were disputed in 50m Rifle 3 Positions Men. The winner of the event was Sergey Kamenskiy from Russia with 456,7 points. The silver medal was won by Alexis Raynaud from France (455,2), the bronze – by Daniel Brodmeier from Germany (455,3). But all of them, as well as most of the finalists, have won the right to take part in the 2016 Olympics before. So, the Quota Places went to Milenko Sebic who finished the competitions on the sixth place, Michael Janker from Germany who was seventh and to Gernot Rumpler from Austria who occupied 13-th place after Qualification.

Russia established the new European Record and was the best in team classification with 3524 points. Germany was second with 3523 points and France – third with 3511 points.

Adela Sykorova from the Czech Republic won a non-Olympic 50m Rifle Prone Women event with 623,8 points. She was followed-up by Snjezana Pejcic from Croatia (621,2 points) and Yulia Karimova from Russia (619,4 points).

Germany won this event in team classification with 1850,9 points. The trio from the Czech Republic scored 1850,4 points and got silver medals. Russia was on the third place with 1847,9 points.

Several sets of medals were disputed in Junior competitions.

Nikola Foistova from the Czech Republic won 50m Rifle Prone Women Juniors with 621,2 points. Her compatriot Sabina Thurnwaldova was second with 617,5 points and Ines Niewada from France was third with 617,1 points.

In team classification the Czech Republic was on top of the podium with 1850,3 points. France occupied the second place with 1842,1 points and Austria was third with 1837,7 points.

Emilien Chassat from France was the best in 50m Rifle 3 Positions Men Juniors. He scored 454,6 points. The silver medal went to Filip Nepejchal from the Czech Republic (446,2 points), the bronze medal – to Kristian Thomsen from Denmark (439,4 points).

Serbia won the team classification in this event with 3427 points, followed up by Croatia (3423 points) and Norway (3418 points).

In Skeet Women Juniors Katrin Wieslhuber from Germany hit 11 targets in the Gold Match – one more than the silver medalist Alina Fazylzyanova from Russia. Jitka Peskova from the Czech Republic beat her compatriot Barbora Sumova in the Bronze Match (14-12).

The trio from the Czech Republic established the new European Record Juniors and won the team classification in this event with 202 hit targets. Germany was second (196 targets) and Russia – third (195 targets).

In 50m RT Men all three positions on the podium were occupied by the shooters from Russia. Dmitry Romanov won the gold medal with 591 points, Mikhail Azarenko was second with 590 points and Maxim Stepanov was third with 589 points.

No surprise, Russia was on top of the team classification in this event (1770 points). Sweden got the silver medals (1745 points), Hungary got the bronze (1741 points).

The most precise shooter in 50m RT Men Juniors was Mika Kinisjarvi from Finland. His result is 591 points. The silver medal went to Ihor Kizyma from Ukraine (587 points), the bronze medal – to David Pokorny from the Czech Republic (576 points).

Finland won the team classification in this event with 1733 points. Ukraine was second with 1702 points.