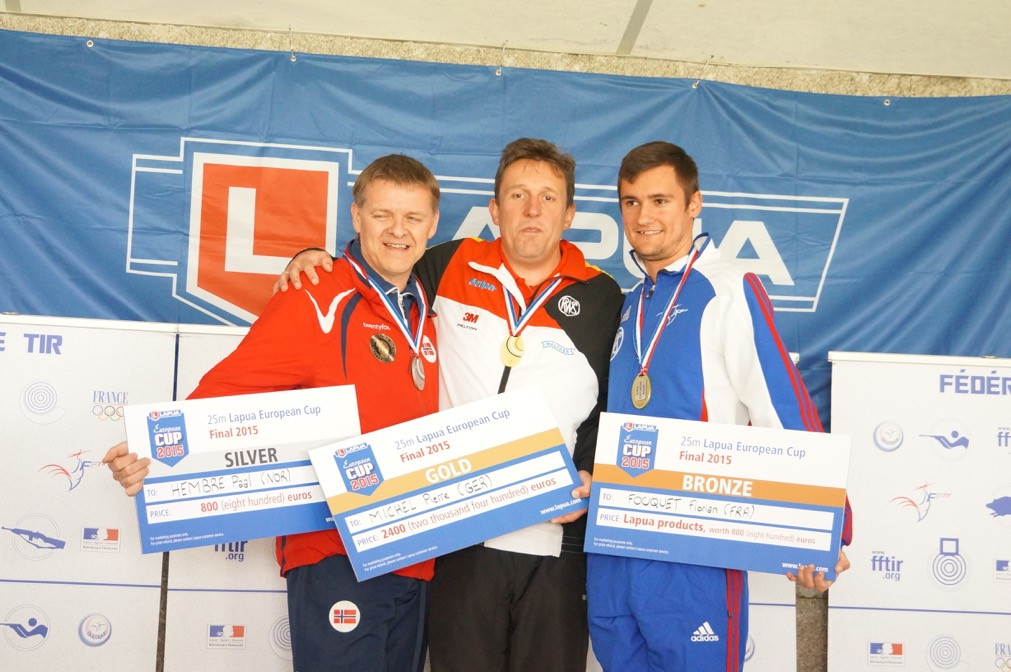 The 25m and 300m Lapua European Cups culminated with Finals in Zagreb, Croatia, and Bordeaux, France.

24 shooters from 10 countries gathered in Bordeaux on September 25-27 to dispute the medals and titles in the two events of the 25m Lapua European Cup Final – Centre Fire Pistol and Standard Pistol.

Pierre Michel from Germany scored 588 points and attributed the victory in 25m Centre Fire Pistol Men events. The runner-up was Paal Hembre from Norway. Florian Fouquet from France finished on the third position. His compatriot Boris Artaud won the 25m Standard Pistol Men competitions with 572 points. He was followed by João Costa from Portugal (570 points) and Michael Schleuter from Germany (568 points).

39 participants from 12 countries were present in Zagreb for the 300m Lapua European Cup Final on September 24-27. Due to preparations to the CISM Games some athletes could not come, but most of the best European rifle shooters were present. The shooting range was perfectly prepared by the Army general Kresimir Vrancic, member of the ESC 300m Sub-Committee. With the full support of the Croatian Shooting Federation the organization was excellent.

On the first day of the competitions a new EER was established by Lisa Mueller from Germany. In the 300m Prone Women she scored 599 points and won the gold. She was followed by Catherine Houlmont from France and Ljudmila Kortshagina from Estonia. In 300m Prone Men the victory went to Rajmond Debevec from Slovenia who scored 598 points. Second was Peter Sidi from Hungary, third – Valerian Sauveplane from France.

On the second day of the competitions a new European record was established by a very young athlete from Austria Gernot Rumpler. In 3x40 event he scored 1185 points that is 6 points over the old European and World records. The result of Gernot Rumpler should be considered outstanding not only because he set a record. He had 65 inner tens! The runner-up in this event was Peter Sidi followed by Rajmond Debevec.

In 300m 3 Positions Women the most precise shooter was Charlotte Jakobsen from Denmark with 585 points. Lisa Mueller finished on the second position with 578 points; Marina Schnider from Switzerland was the third with 576 points.

On the last day of the Finals a new version of the Mixed Team event was tried in 300m Prone with the selection of pairs done by random. It was really random but Lisa Mueller and Gernot Rumpler come out as a pair. No surprise, they won the event. The new format of shooting was very nice and everybody liked the idea. After 5 shots the lowest pair goes out, until the winner is determined.

The 300m Standard Rifle Men was won by Simon Claussen from Norway who scored 587 points. Andrea Rossi from Switzerland was the second with 585 points. Gernot Rumpler finished on the third position here with 584 points.

In general, in all events the results were extremely high and only one point under the records. Lapua was present in Zagreb and we thank the company for sponsoring of the competitions that were a very good promotion of the European shooting.

A very nice banquet was offered to all participants by the Croatian Shooting Federation on the Saturday evening and a little closing farewell party on Sunday.