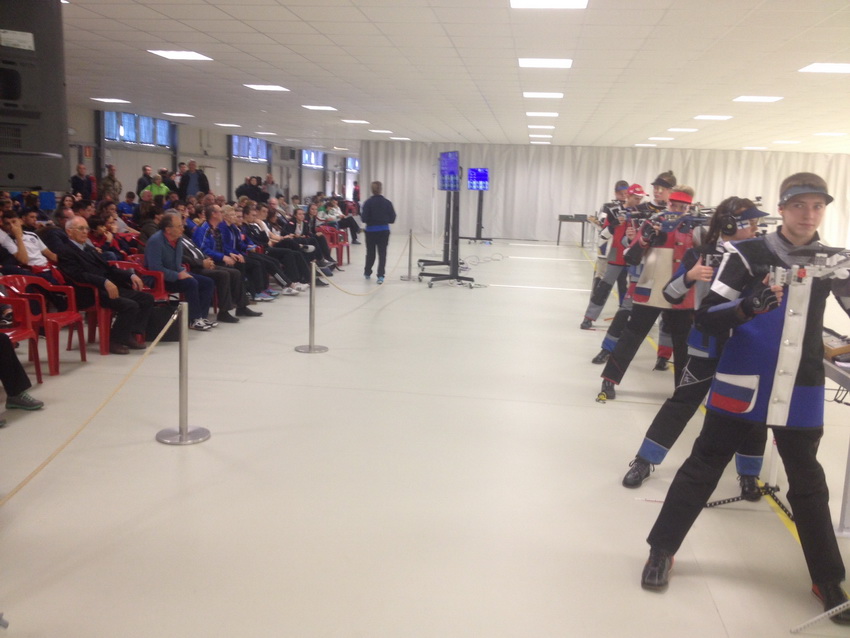 For the second time in the history of the European Youth League the Final was entrusted to the Italian Shooting Union and the Bologna Shooting Club. 62 young athletes and their coaches from 14 countries had come to Italy to compete for the medals and trophies during the weekend 13-16 October 2016. The EYL started in 2009 with the aim to give young athletes international experience during a competition with a different and exciting format. At the same time the EYL offers a possibility to make new friends around Europe.

Since the beginning of this year young athletes all over Europe have qualified in two steps to enter the prestigious EYL Final. In the Air Rifle event the participants came from Austria, Finland, Hungary, Norway, Russia, Serbia, Sweden and the host federation Italy. The Air Pistol competitors came from Croatia, Czech Republic, Hungary, Latvia, Lithuania, Poland, Ukraine and the host country Italy.

The EYL is a mixed team competition, a fight head to head for the 3 team members. The teams must be composed of both genders and the competitors are 14-18 years of the age. This time 31 girls and 31 boys participated. After the first 2 days of competition in 2 groups, with 3 matches for each team, the 4 best teams qualified for the bronze and gold matches on Sunday.

The pistol teams of Ukraine and Poland won all qualification matches in Group 1 and 2 respectively and so met in the Gold Medal match on Sunday. The Polish athletes were in the lead during the first 18 shots (out of 20) and the Ukrainian team had to fight hard to catch up with their opponents. After 19 shots the team from Ukraine was in the lead for the first time and finally they could secure the victory with 64 match points against 56 for Poland.

The Bronze Medal match was also a very exiting combat with Italy taking the lead and the Czech team fighting back. The scenario changed after 13 shots when Czech Republic was in the lead with Italy chasing the medals. The host federation Italy never gave up and won with 64 match points against 56 for Czech Republic.

The rifle competition did not offer the same excitement. Finland and Russia won all of the matches in their respective groups and met in the Gold Medal match on Sunday. Here the Finnish young athletes won an easy victory after excellent performance with 73 match points against 47 for Russia.

The Bronze Medal match was in the hands of the Hungarian team from the very start. The match points showed a final result of 78 for Hungary and 42 for Italy.

In addition to the EYL Medals the teams entering the podium also received a special trophy offered by the Organizing Committee. The ESC challenge trophies will now stay in Ukraine and Finland respectively till the EYL Final 2017. The teams on the podium also received the special gifts from the ESC President Mr Vladimir Lisin in the form of 1-2-3 SIUS Hybridescore targets for the teams placing 3-2-1.

The ESC is most grateful to Unione Italiana Tiro a Segno and the Bologna Shooting Club for the excellent conduct of the Final. We would also like to thank the young athletes and their coaches for great performance in the spirit of friendship and fair play.

The ESC welcomes all European Federations to the EYL 2017 ending with the Final taking place in Osijek in Croatia.