THE 300M SHOOTERS ENTER INTO THE RACE FOR MEDALS AND TITLES 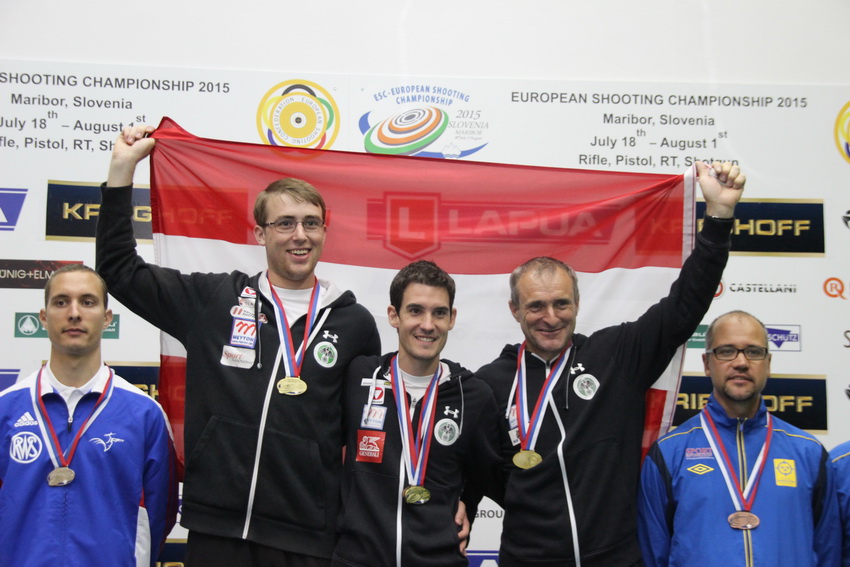 The 300m shooters have started their competitions at the 2015 European Championship in Maribor, Slovenia.

The first to obtain the gold medal and the title of the European Champion was Lisa Mueller from Germany. She won the 300m Rifle Prone Women event with 394 points. The second with the same number of points was Hannah Pugsley from Great Britain. Bettina Bucher from Switzerland finished on the third place with 392 points.

In the team classification Switzerland was the most successful with 1775 points followed by Germany (1770 points) and Estonia (1767 points).

Valerian Sauveplane from France won the 300m Rifle Prone Men event. His finished the competitions with 599 points. Rajmond Debevec brought the first medal of this European Championship for the host country, Slovenia. He was on the second place with 597 points. The bronze medal went to Stefan Raser from Austria who also scored 597 points.

The only Olympic event that took place in Maribor on Monday was 25m Rapid Fire Pistol Men. It was won by Oliver Geis from Germany who scored 34 points in the Final. Alexei Klimov from Russia finished on the second place with 33 points. Jorge Llames from Spain won the bronze with 26 points.

The only Olympic Quota Place disputed in this event went to Roman Bondaruk from Ukraine who finished the competitions on the forth position.

The trio from Germany was on top of the team classification with 1742 points followed by Ukraine (also 1742 points) and France (1722 points).