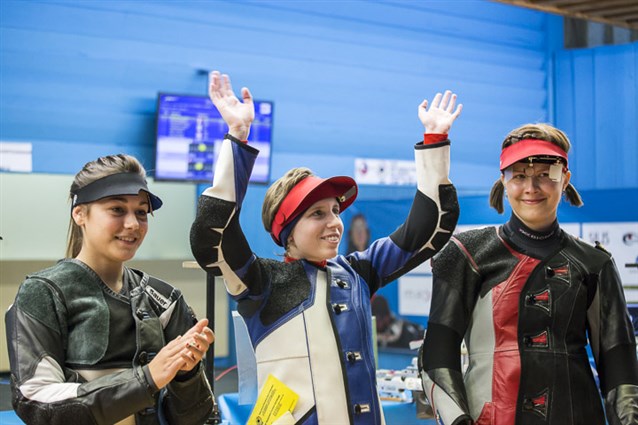 Sarah Hornung (in the centre of the photo) from Switzerland and Andrea Vescovi from Italy managed to win gold medals at the 51st ISSF World Championship during the 6th day of competitions in Granada. The 18-year old Hornung, who recently became winner of the Youth Olympic Games in Nanjing, China, was the best in 10m Air Rifle Women Junior event. While the Italian athlete won the Double Trap Men Junior.

The silver medal in 10m Air Rifle Women Junior went to Martina Zivani from Italy who lost only 0,1 point to the winner. Selina Gschwandtner from Germany got the bronze medal. Another German shooter Nina Laura Kreutzer finished on the 6th place. In Team Classification the trio from Germany won the gold with the new World Junior Record (1246,5 points). The Islamic Republic of Iran was the second, Switzerland – the third.

The rival of Andrea Vescovi in the Gold Medal Match was Ian Rupert from the USA. The bronze medal went to Anton Slepushkin from Russia who was better than Nathan Lee Xuereb from Malta in their Medal Match. Kirill Fokeev from Russia finished on the 5th place, Filip Praj from Slovakia - on the 6th. In Team Classification Russia was first, Italy - second , the USA - third.

Two sets of medals were also disputed in Olympic events by Seniors. In Double Trap Men Antonio Barilla from Italy lost only one target to Joshua Richmond in the Gold Medal Match and won the silver medal. Both obtained the Quota Places for the Games of the XXXI Olympiad in Rio-de-Janeiro. Steven Scott from Great Britain beat another Italian athlete Daniele Di Spignio in the Bronze Medal Match. Vitaly Fokeev from Russia finished on the 6th place. In Team Classification the title of World Champions went to the trio of Italy.

In 25 Rapid Fire Pistol Men Oliver Geis from Germany was second after Kim Jun Hong from Korea. Both won Olympic Quota Places. Martin Strnad from the Czech Republic finished on the 4th place, Roman Bondaruk from Ukraine - on the 5th place and Christian Reitz from Germany - on the 6th place. Germany was on top of the Team Classification, the Czech Republic - on the second place, Russia – on the third.