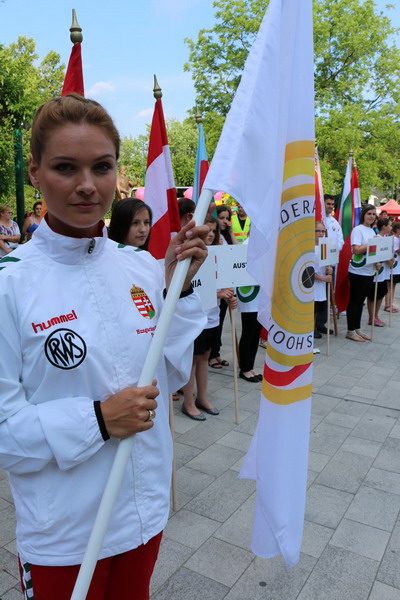 The European Shotgun Championships were officially opened on Thuesday evening, 17th of June, in Dabas City nearby the Sarlospuszta Shotgun Shooting Center. The programme of the opening ceremony consisted of the official greetings and music.

The Technical Delegate and ESC Presidium Member Mr. Tamas Imnaishvili brought the regards of the ESC President Mr. Vladimir Lisin. ESC President remarked that this year was very important for the participants. The I European Games will take place in 2015. Besides medals, participants will fight it out for the Quota Places for the Games of XXXI Olympics in Rio-de-Janeiro. And the qualification for the European Games will be based on the ESC ranking as of December 31, 2014.

The minister of State for Sport Dr. Istvan Simicsko reminded that “we have a common language and it is sport. In sport we will always be good. We have to understand the value of sport. Through sport we can understand each other better, grow up as a better people and of course be better athletes”.

The advisor of the Prime Minister Dr. Gábor Balogh pointed out that this kind of Championships will motivate not only the organisers but also the hosting team to do their best. He said: “Our international guests can see that Hungary and Sarlospuszta is a good place for organising more international championships in the future. We are ready for that”.

In his speech the Mayor of the Dabas City Mr. Zoltan Köszegi reminded of the importance of the international relations: “Hundred years ago guns were used here, now we use them too, but now in other meaning: creating international relations in a good way – sport way. Through our sport we can have new friends, understand each other and live in peace together”. He was also very proud that City of Dabas was the host of opening ceremony.

The official part of the Opening Ceremony was finished by a short violin concert by the fiddler Olga Nédó. Her playing was full of emotion and the sound of her violin was full of love. After the opening ceremony people could enjoy the concert of Hungarian 2010 X-Factor winner Csaba Vastag.

The Championships started with the competition of Trap. The finals will be tomorrow (19th June). The Final of Women Junior will start at 15.45 and the finals for Women at 17.15 Hungarian time.

The finals of Men juniors will be competed on Friday (20th June) at 13.15 and finals for men at 14.45. After the finals there will be a new exciting competition with new method called TOP TEAM MATCH. It will start at 16.15.