The European Solidarity: Olympic Champion Niccolo Campriani from Italy and Are Hansen from Norway get Olympic Quota Places thanks to the shooters from Russia and Belarus 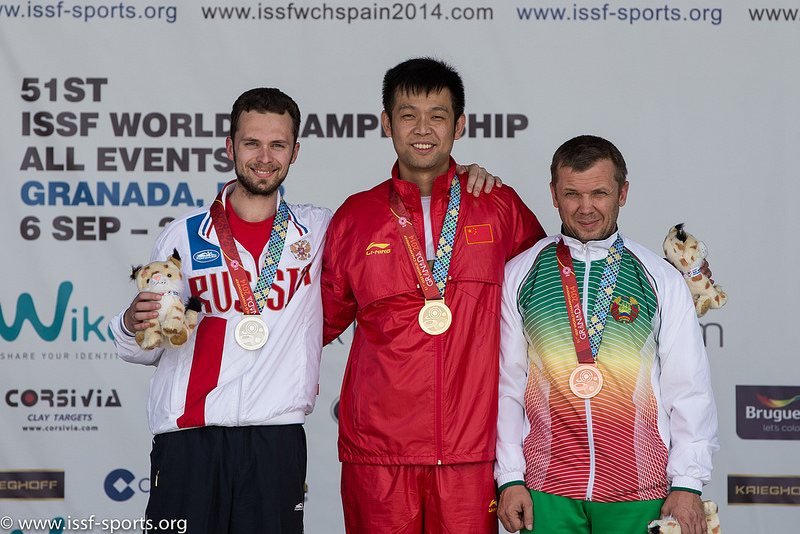 There was only one Olympic event - 50m Rifle 3 Positions Men - in the program of the 6th day of competitions at the 51st ISSF World Championship in Granada. And it was won by 2004 Olympic Champion Zhu Qinan from China. Sergey Kamensky from Russia got the silver medal and Vitaly Bubnovich from Belarus (on the photo) got the bronze medal. There were four more Europeans in the Final. Serhiy Kulish from Ukraine finished on the 4th place, Nazar Louginets from Russia - on the 6th, Are Hansen from Norway - on the 7th and Niccolo Campriani from Italy - on the 8th.

Five Quota Places for the Games of the XXXI Olympiad in Rio-de-Janeiro were disputed in 50m Rifle 3 Position Men. Due to the fact that Sergey Kamensly, Vitaly Bubnovich and Nazar Louginets already won them in Granada, Are Hansen and Niccolo Campriani obtained the Quota Places despite of their final positions in this individual event at the World Championship.

In Team Classification Are Hansen with his colleagues became the silver medal winner. The bronze medals were won by the trio from Russia. The gold went to the team of China.