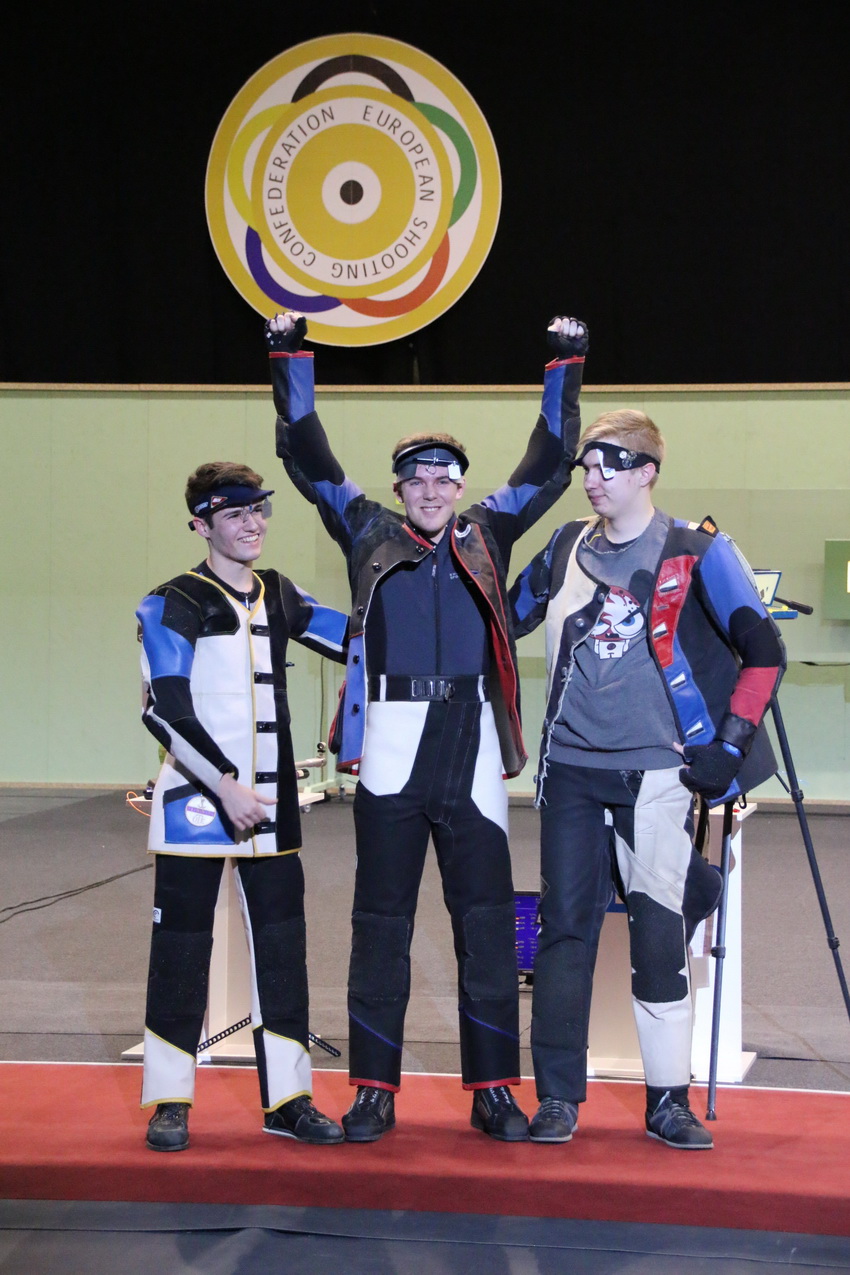 In Running Target Ukraine was strong during the first competition day.

After celebrating the Opening Ceremonies the athletes faced their daily life. It was time to start the competing side of the Championship. The first finals of today were the Running Target 30+30 Junior Men and Running Target 20+20 Junior Women. The Running Target Shooters started with the slow runs and continued with fast runs.

In Junior Men´s competition at the leading point was Ihor Kizyma (UKR) whose result was 577 points (290 from slow runs and 587 from fast runs). Second was Kizyma´s team mate Maksym Babushok with the result of 560(280+280), the third position achieved Russian Iaroslav Klepikov with result of 558 (274+284). The last semifinal place took French Nicolas Tranchant with result 555(284+271). In the Medal Match Tranchant met Kizyma (UKR) and Babyhok(HUN) met Klepikov (RUS).

The first medal match served four good competitions. The two favourites (Kizyma and Babushok) won easily their semi-finals: Kizyma 6-4 and Bubushok 6-2 to the Gold Match and Tranchant and Klepikov to the Bronze match.

After the 6 shots it looked like that Iaroslav Klepikov will take a clear win while he was leading already 5-1 his match. But the game was not over. Tranchant managed to keep his nerves cool and won four next shot. The situation was suddenly 5-5. The two next shots won Klepikov and he was the bronze medallist with result 5-7.

The Gold match was the battle of two young Ukrainians. The Qualification winner Ihor Kizyma did not give any a lot of change to Babushok and won directly gold with result 6-3.

In the semi-final Ukrainian Yuliya Tymoshko surprised the World Record holder Hungarian Veronica Major by winning her 6-2 continuing to the Gold Match. In the second semi-final Florence Lois from France beat Natalia Pochatkova from Russia with the result 6-4.

In the bronze match Veronica Major did not give any possibilities for Natalia Pochatkova and won the bronze medal with result 6-3.

In the Gold Match Ukrainian Tymoshko was ruled the first seven shot leading 5-1 and it looked that the match is easily over. Lois woke up by winning three next shots but her power couldn´t reach to the end. Tymoshko won gold with result 6-4.

In the team competition Russia beat Ukraine by 18 points with result 1076. The team consisted of Natalia Potchakova (371), Anna Kostina (361) and Ksnelina Anufrieva(343). In the silver team Ukraine shot 1058 points and consisted of Yuliya Tymoshko (366), Viktoria Stetsiura (351) and Daria Rozhniatovska (341).

Shooting Sport as the other sports too might be surprising and exciting drama. The winner is clear only when the final is over. This recognized last year´s Champion Margarita Lomova who was on the top with two other athletes after the qualification with result 379 in 10m Pistol Junior Women Competition.

When the first elimination point of final was achieved, the announcer Jousef Shakeel told that we might have a new European Champion while the first who will be now eliminated/drop out is surprisingly Margarita Lomova. What a drama at once!

Actually the real drama was seen, while French Mathilde Lamolle ruled the final and was superior with the difference of 4.7 points before Georgian Nino Khutsiberidze who won silver with result of 193.7 points. Denisa Bezdecna from Czech Republic won bronze with result 174.9 before German Teresa Gross.

The most interesting person at the finals was probably was Hungarian Veronika Major, who couple of hours before in the afternoon won bronze in Running Target 20+20 Junior Women competition. This was her first international pistol competition. She shot nicely and won the fifth place. We can see in the future a multi medalist in two different disciplines. Her performance was excellent!

If Lamolle was superior in her final, so we can nearly say from the team Russia who won the Team Championship with result of 1125 even Lomova shot unfortunately low result for her. Russia beat the team of France with 9 points. The Russian team consisted of Margarita Lomova (379), Alexandra Nikolaenko (376) and Tatiana Shkred (370). The result of France was 1116. The winning result of silver medal was 1116 and the French team consisted of Mathilde Lamolle (379), Sophie Polo (372) and Celina Perrey (365). The Bronze medal winner team was Germany with result of 1115 (Teresa Gross 379, Susanne Ross 372 and Lea Kleesattel 364).

We can say that German Maxilliam hurried slowly in the 10m Air Rifle Junior Men finals. Hungarian Istvan Peni ruled the first part (12 shots) and it looked like that Peni will be the Champion. But just slowly and easy behind Peni arrived Maximillian Dalliner decimal per decimal nearer and nearer. First time Dallinger passed Peni when 12 shot has been shot. During the 14th shot Istvan Peni managed to pass Dellinger again by shooting 10.3 when Dallinger shot 9.7. At 14th shot they had equal results. Then Peni went to lead o.1 point. But in the next shot Dallinger answered with an excellent 10.9 shot and took the lead with a 0.8 difference. The last shot was to decide the gold and silver.

- I heard the spectators cheering when Istavn shot. I knew that I have success very well. I was ever so excited but I tried only to control my own shooting. I knew that if I can keep my thoughts cool, concentrate fully to last two shot I would win the Champion, and so I did. This was the dramatic final in my carrier, told the European Champion after the final.

The European Championship result of Maximillian Dallinger was 205,8. Istan Peni won silver with result 205,1 and bronze travelled with Kyryll Koziuk with result 181.6 to Ukraine.

Istavan Peni received anyway the gold medal when he and his team mates won the team event European Championship with result 1861.5. In the Hungarian team consisted of Istvan Peni (628,4), Zal