The names of the second Trap day: D Ambrosio and Fabbrizi 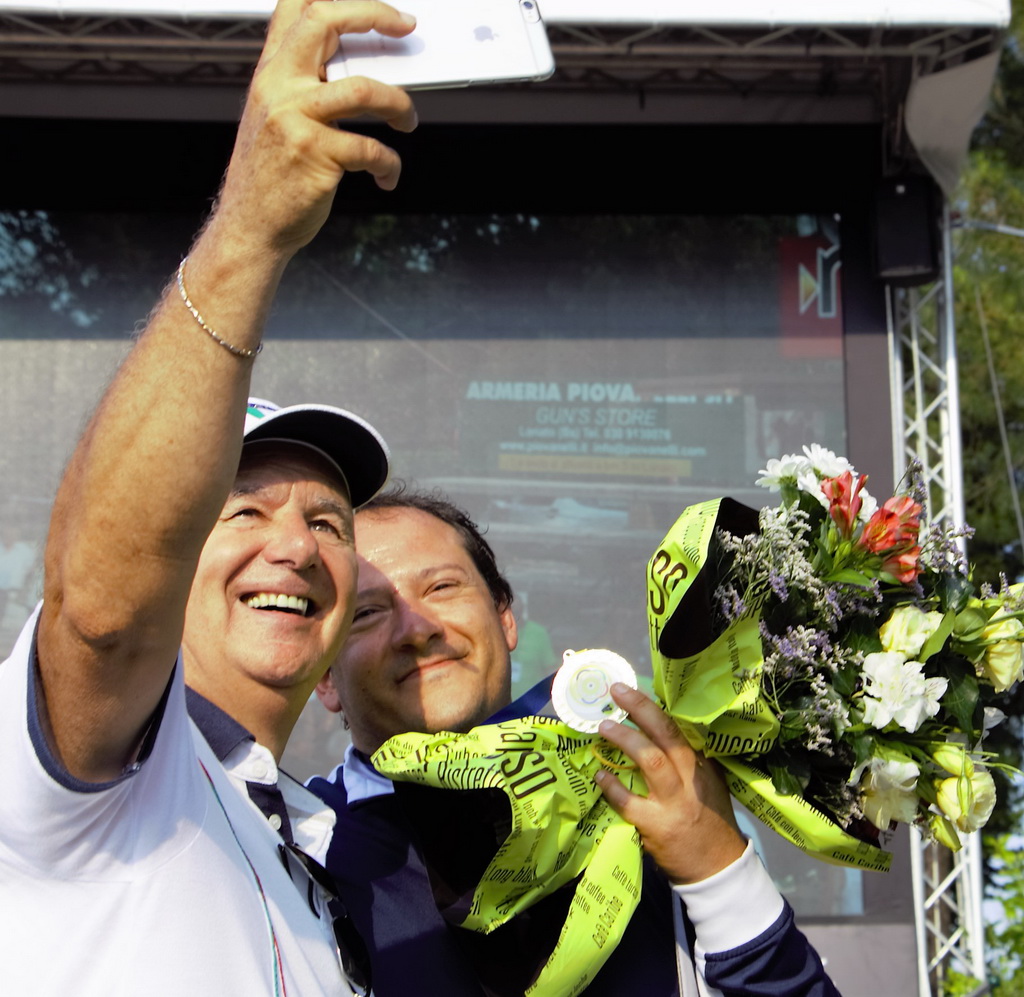 The second day woke up nearly as windy as the first one. As we all know the wind makes the competition more exciting. Other coaches told that the wind does not mean anything while it is so mild, but the former champion “Charlie” had another opinion.

“Lonato is very difficult place to shoot, wind – even a light one – will influence and in the front field the wind is rolling and changing direction. It is not the same as at the firing point”, explained Charlie.

After the first stage (50 clays) in Trap men there were on the top place two athletes: German Karsten Bindrich and Czech Jiri Liptak shot both full 50. Four athletes had shot 49 clays. After those six athletes there were 13 athletes who were only two clays behind the top.

After 75 clays Jiri Liptak was still on top place by hitting 74 clays. Four athletes were one clay behind him:

After 100 clays Liptak wanted to keep his top place and showed a perfect round again. Behind him there were Glasnovic and Azevedo (both 98), and only these two there were Fabbrizi and Alipov. On the sixth place (96 clays) in that moment was Estonian Anders Kull four other athletes.

Everything is still open for finals, nothing is clear yet. This heat and little wind are dangerous for athletes if they do not control themselves. If you do not drink enough water your reactions will slow down. If you will be late a small part of second you will have probably the clay lost. Yesterday there were two women trap shooters who had to be taken to the hospital – lack of liquid.

Liptak shot his last round well, only one missed clay. His result was 123 and he was the best in the qualification. The following two reached the finals directly were Italian Massimo Fabbrizi and Croatian Josip Glasnovic, both hit 121 clays. The limit of finals was 120 and from the last three places for finals made the shoot-off Croatian Giovanni Cernogoraz, Portugueses Joao Azevedo and Jose Bruno Faria. The last who reached to the shoot-off was Oguzhan Tuzun from Turkey. In the shoot-off the unlucky was Giovanni Gernogoraz.

Finals are finals – a new competition

As I have been written many times before the competition is over when the last shot has been fired and the final is a different match. So it was today also in Trap Men competition. The semi-final started well when looking from Liptak’s eyes. He hit the four first clays but then came the fifth and he missed it. Portuguese Azevedo and Bruno were leading with full scores. During the next five shots Liptak missed again one and during the last five he did the same twice. 11 clays – and he was out of medal matches. One missed clay is too much. During the semi-final Italian Massimo Fabbrizi showed that he is the man of finals. Only one clay missed – and directly to the gold match. With same result (14) Croatian Josip Glasnovic reached the place for gold match. Both Portuguese shot 12 clays and they competed in bronze match.

Joao Azevedo was better in the bronze match but only one clay better than his team mate Jose Manuel Bruno Faria. Bronze for Azevedo 14-13.

In the gold match met Glasnovic and Babbrizi. Both athletes started well, the tied was broken for the first time in the seventh shot when Glasnovic missed it. Four next shots and Fabbrizi misses the clay. Deuce again! The shooting continued the same until the end, match was 14-14 and it meant shoot-off. Glasnovic hits two first and same does Fabbrizi, third shoot-off shot and Glasnovic missed it. Now it Fabbrizzi’s possibility to hit and to win the match. What does Fabbrizi? He hits the clay and wins the gold medal!

“This medal was missing from my collection, but now I managed to have it! I´m very happy and grateful. I´m going forward step by step. The big goal is in front. Yes I´m travelling to Rio. I can´t say anything yet. Now everything looks good”, explained clearly in relief the European Champion.

The team of Croatia surprised the other team by winning the gold with the difference of 2 clays before Czech Republic. The golden result was 360.

After 75 clays on the top place was Finnish Vili Kopra who shot full score (25 clays) and arose from the eighth place to the top. Kirilov and Ling were at same score as Kopra. Teixeira did not managed as well as yesterday and he hit only 21 clays and dropped at that moment to the fifth place with result 71.

After 100 clays the top place took Bulgarian Kirilov (97), behind Kirilov British Ling had 95 clays, D Ambrosio (ITA), Georgiev (BUL), Kopra (FIN) they all hit 94. The last round will be exciting.

After the last round the situation was following: Theo Ling (GBR) 120, Ivan Georgiev (BUL) 119, Marin Kirilov (BUL) 118, Simone D Ambrosio 117 directly to the finals. Finnish Vili Kopra (115), Italian Matteo Marongiu (115) and Russian Maxim Kabatskiy (115) have to shoot a shoot-off. The two lucky ones who reached the finals were Marongiu and Kabatkiy when Kopra missed the first clay.

Italy is the best in team competition

The young Italians showed their skills in right place. Both went to the gold match – D Ambrosio missed only one and Marongiu twice but the both went directly to the finals. To the bronze match solved their road Russian Maxim Kabatskiy and British Theo Andrew Ling.

In the Bronze match Kabatskiy started nervously and missed the first clay. Ling missed the third clay. Deuce. Then both missed the fourth clay and then Kabatskiy again the fifth clay. Ling took the leading 3-2 at that moment. When the both athletes shot perfectly to end won Ling the bronze medal with result 13-12.

In the Gold match Simone D Ambrosio was superior. The Rookie Matteo Marongou did not managed to keep his shooting in balance during the six first shots – only one hit when his team mate hit all the clays. D Ambrosio missed only once and won the European Championship clearly 14-8.

In the team competition the team of Italy was as superior as D Ambrosia. Italy won the gold medal clearly with the difference of seven clays, their result was 346. The team consisted of Simone D Ambrossio (117), Matteo Marongiu (116), Riccardo Faccani (113). The winner of silver was team of Bulgaria with same result with Finland. Both hit 339 clays but the team of Bulgaria had better result in the last series.