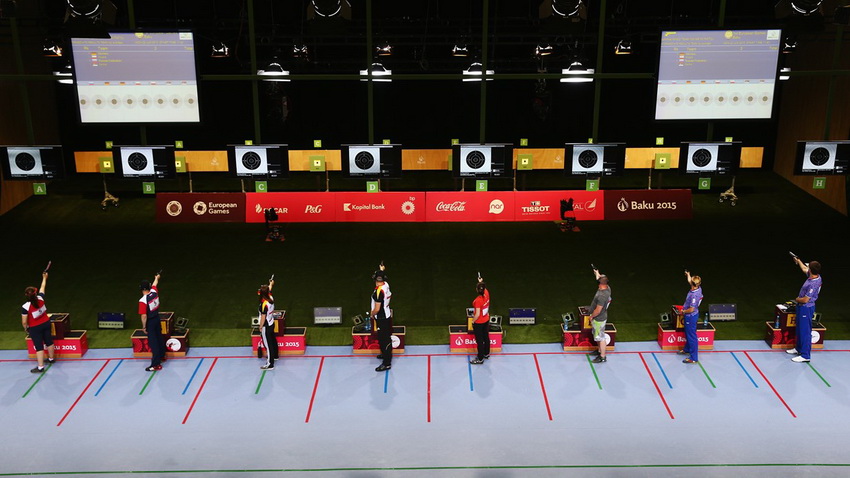 The program of the last day of the shooting competitions at the 1st European Games in Baku included three Mixed Team events - in 10m Air Rifle, 10m Air Pistol and Skeet. Those were highly expected events because never before the teams composed of one man and one woman from the same nation were part of the official program of the continental or world championships. The European Shooting Confederation created the format of such competitions and decided to set an example of how they should be conducted.

12 teams - from Austria, Croatia, Denmark, France, Germany, Hungary, Italy, Norway, Russia, Serbia, Switzerland and Ukraine - were on start of the 10m Air Rifle event. Eight of them proceeded to the semifinals.

The "dream team" from Italy composed by Petra Zublasing and Niccolo Campriani was the best one in the first semifinal with 249,4 points after 12 shots by each athlete and proceeded to the Gold Match. The duo from Sebia composed by Andrea Arsovic and Milutin Stefanovic was second with 247,5 points and won the right to participate in the Bronze Match. Norway and Hungary were less successful at this stage of the competitions. The second semifinal was unexpectedly won by Stine Nielsen and Steffen Olsen from Denmark who scored 244,0 points. The Russians - Daria Vdovina and Sergey Kruglov - were second with 243,8 points, while the teams of Austria and Croatia were left on the third and forth places respectively. It is worth to mention that female shooters have shown better results than their male partners in seven out of the eight teams that competed in the semifinals.

The real drama expected everybody in the Finals. Russia beat Serbia in the Bronze Match with the score 5-3, Italy could prove its superiority over Denmark and become the European Games Champion only in the very last shot - 5-4.

A big surprise waited the spectators already in the first semifinal. The team of Greece composed by Anna Korakaki and Konstantinos Malgarinos was the best with 239,6 points after 12 shots done by each athlete and proceeded to the Gold Match. The Spanish duo was second and won the right to compete in the Bronze Match. Ukraine and Latvia were left of the third and forth places respectively. The German shooters Monika Karsch and Chrisrian Reitz won the second semifinal and a pass to the Gold Match with 237,7 points. The Russians Ekaterina Korshunova and Vladimir Gontcharov with 236,3 points were more precise than their rivals from Poland and Serbia.

The results of the Final demonstrate the level and tension of the competitions. Russia beat Spain in the Bronze Match 5-4. With the same score Germany obtained the victory and the title of the European Games Champion in the Gold Match against Greece.

The absolute hit of the Shotgun competitions was the Mixed Team event in Skeet. The duo from Cyprus composed by Andri Elefteriou and Georgios Achilleos was the best in Qualification with 97 hit targets out of 100. The teams of the Czech Republic, France, Italy, Germany and Slovakia also managed to proceed to the semifinals. Azerbaijan, Finland, Russia, Sweden and Ukraine were eliminated after the first stage of the competitions.

Cyprus confirmed its class by winning the first semifinal with 26 hit targets out of 32 (each athlete shot 16 doubles). The team of Slovakia composed by Danka Bartekova and Stefan Zemko was second with 25 hits and proceeded to the Bronze Match. Germany was eliminated after the 12 doubles. The second semifinal was won by the Italians Diana Bacosi and Valerio Luchini. They hit 29 targets and got a pass to the Gold Match. The team of France (Lucie Anastasiou and Anthony Terras) was second with 24 hits, the duo from the Czech Republic was eliminated after the 12 doubles.

In the Bronze Match France was more precise than Slovakia (28-25). In the Gold Match Italy hit 30 targets while Cyprus only one less.

All the athletes praised the new events and expressed desire to have them included in the program of future important competitions.