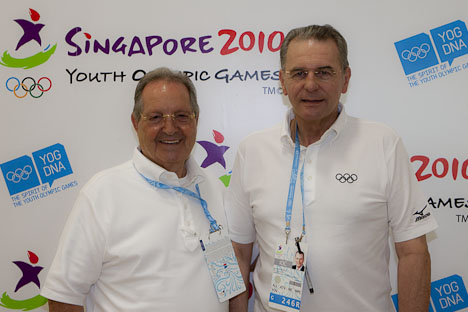 Air Pistol and Air Rifle Mixed Team events, two new shooting competitions, have been accepted by the IOC and will be included in program of the 2014 Youth Olympic Games in Nanjing.

The ISSF is very pleased to report that two additional shooting events will be included in the program of the 2014 Youth Olympic Games, taking place in Nanjing (CHN) from the 16 through the 28 of August 2014.

The Shooting program will be increased from four events (Air rifle and Air pistol, men and women) staged at the first YOG in Singapore, in 2010, to six events in Nanjing, including the new Air Pistol and Air Rifle Mixed Team events.

The additional events will not modify the total number of YOG Quota Places for our sport: 80 young shooters will compete in Nanjing.

At the same time, the ISSF proposal of including two new shotgun events in the Youth Olympic Games program could not be accepted in order to control YOG costs, which would have been affected by a second venue for shotgun shooting.

“We are extremely satisfied of the fact that we will have two additional events in the YOG program.” The ISSF Secretary General Franz Schreiber said.

"Our first proposal included two new Shotgun events, but this would have required an additional venue for shooting, and therefore the proposal could not be accepted.”

A major objective of this competition will be to give all shooting athletes in the Youth Olympic Games an additional competition experience that brings them together in a special event stressing international cooperation and friendship.

The team events will take place over two days, following the four days of individual competitions.

scores of the two team members will be added and compared with the two shot score total of the other team. The team with the highest total will score one point.

The paired teams will continue to fire one shot contests until one team scores ten points during that round of competition. The eight winning teams in each team event will advance to the quarterfinal, semi-final and final round competitions on the second day. Team pairs will use the same ten-point format in each successive round of competition. The four winning teams in each quarterfinal event will compete in the semi-final to determine the teams that compete for the gold and silver medals and the teams that compete for the bronze medal.

The 2014 YOG qualification period will start on April 1, 2013 and will end on June 8, 2014. Final regulations for this competition format will be provided.