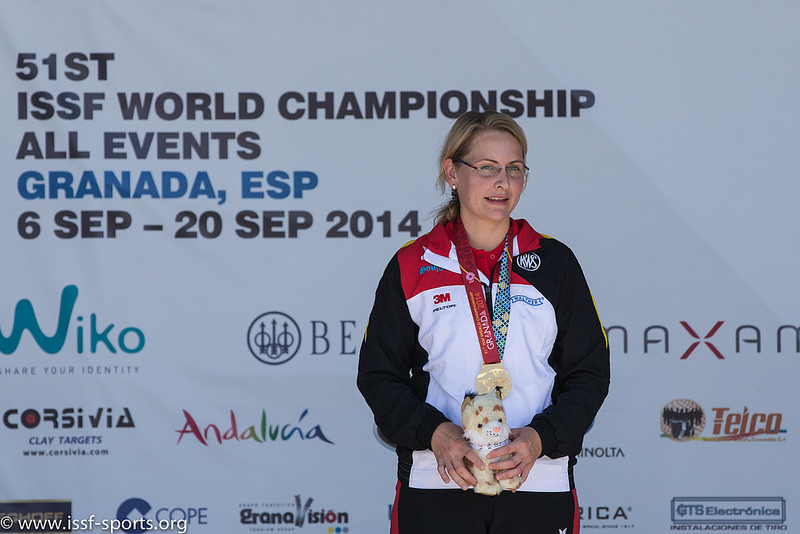 Two out of three Olympic events that were in the program of the 5th day of competitions at the 51st ISSF World Championship in Granada were won by the European athletes. Both new World Champions are from Germany and for both the victory in Granada is the first major success in the ISSF competitions. Beate Gauss (on the photo) won the 50m Rifle 3 Positions Women event and Katrin Quooss was the best in Trap Women.

The three medal winners as well as Nicola Mazurova from the Czech Republic who finished on the 6th place obtained the Quota Places for the Games of the XXXI Olympiad in Rio-de-Janeiro. The Czech shooters must be grateful for that to Petra Zublasing from Italy who finished 4th, but has got a Quota Place already winning the 10m Air Rifle Women. Another Czech shooter Adela Sykorova was also in the Final. Germany attributed the first place in the Teams Classification as well.

In Trap Women Fatima Galvez from Spain won the silver medal. Together with Katrin Quooss she got a desired Olympic Quota Place. The bronze medal went to Catherine Skinner from Australia who beat in the Medal Match another German shooter Jana Beckman. Debora Gelisio from Italy finished on the 5th place, Arianna Perilli from San-Marino - on the 6th. Germany, Italy and Spain were respectively first, second and third in the Team Classification.

The third Olympic event that was disputed this day was 10m Air Pistol Women. Olena Kostevych from Ukraine won the silver medal leaving the gold to Jung Jeehae from Korea. Kostevych as well as Petra Dobravec from Slovenia (4th place), Sonia Franquet from Spain (6th place) and Jasna Sekaric from Serbia (7th place) obtained the Olympic Quota Places. For Sekaric it became possible because Renata Tobai Sike from Hungary who finished on the 5th place ha got an Olympic Quota Place in the 25m Pistol Women event two days before. It is hard to believe but the 2016 Games in Rio-de-Janeiro may become the eighth Olympics for Jasna Sekaric! Polina Konarieva from Ukraine was also in the Final. The trio from Serbia won the Team Classification.

The Junior Women disputed two sets of medals. Yulia Tugolukova from Russia beat Valeria Rafaelli in shoot-off of the Medal Match to obtain the title of the World Champion. Kandira Serdag Saadet from Turkey beat Lisa Nicole Marzo from Italy in the Medal Match for the bronze. Alessia Iezzi from Italy finished on the 6th place. The Italians won the Team Classification with the new Junior World Record, China was the second, Russia – the third.

In 10m Air Pistol Women Junior Vitalina Batsarashkina from Russia and Anna Korakaki from Greece finished respectively second and third leaving the victory to Lin Yuemei from China. Lizi Kiladze from Georgia finished on the 4th place, Klaudia Bres from Poland - on the 5th.