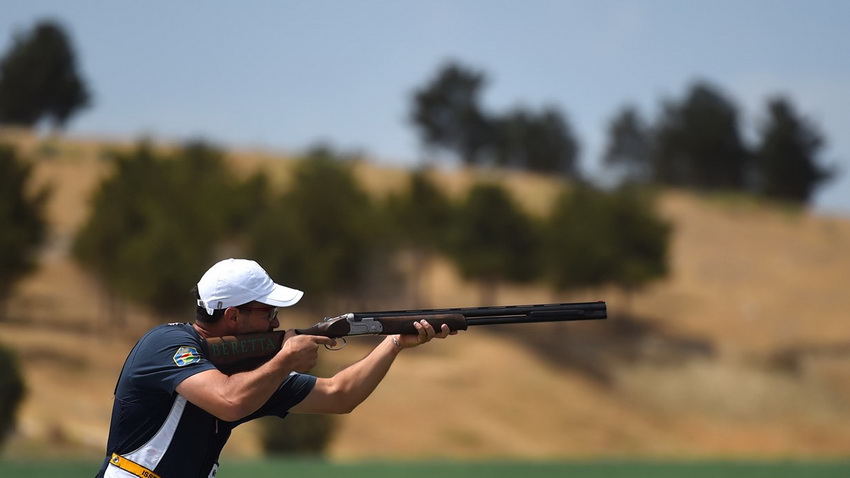 Valerian Sauveplane from France won the gold medal and the Olympic Quota Place in 50m Rifle 3 Positions Men. His result in the Final was 456,2 points. The silver medal went to Petar Gorsa from Croatia who was second with 454,0 points. Vitaly Bubnovich from Belarus, who set the Games Record in Qualification (1160 points), finished on the third place. 33 athletes took part in this event.

Valerio Luchini from Italy became the winner of Trap Men competitions. In the Gold Match he was more precise than Stefan Nilsson from Sweden (16-14) who attributed the Quota Place for the Games of the XXXI Olympiad. The road to the Gold Match for Nillson led through the shoot-off with other three competitors – Marco Kemppainen from Finland, Jesper Hansen from Denmark and Jan Sychra from the Czech Republic.

In the end Kemppainen won the bronze medal, Hansen finished on the forth place, Sychra - on the fifth. Anthony Terras from France who set the Games Record in Qualification (124 hit targets) completed the Semifinal. 30 athletes took part in this event.

The last individual victory in the shooting competitions at the 1st European Games belongs to Christian Reitz from Germany. His result in the Final of the 25m Rapid Fire Pistol was 33 points. Alexei Klimov from Russia finished on the second place (29 points), another German shooter Oliver Geis - on the third. The Olympic Quota Place went to Jorge Llames from Spain who was forth in the Final. 21 athletes took part in this event.

All photos by David Ramos/Getty Images for BEGOC