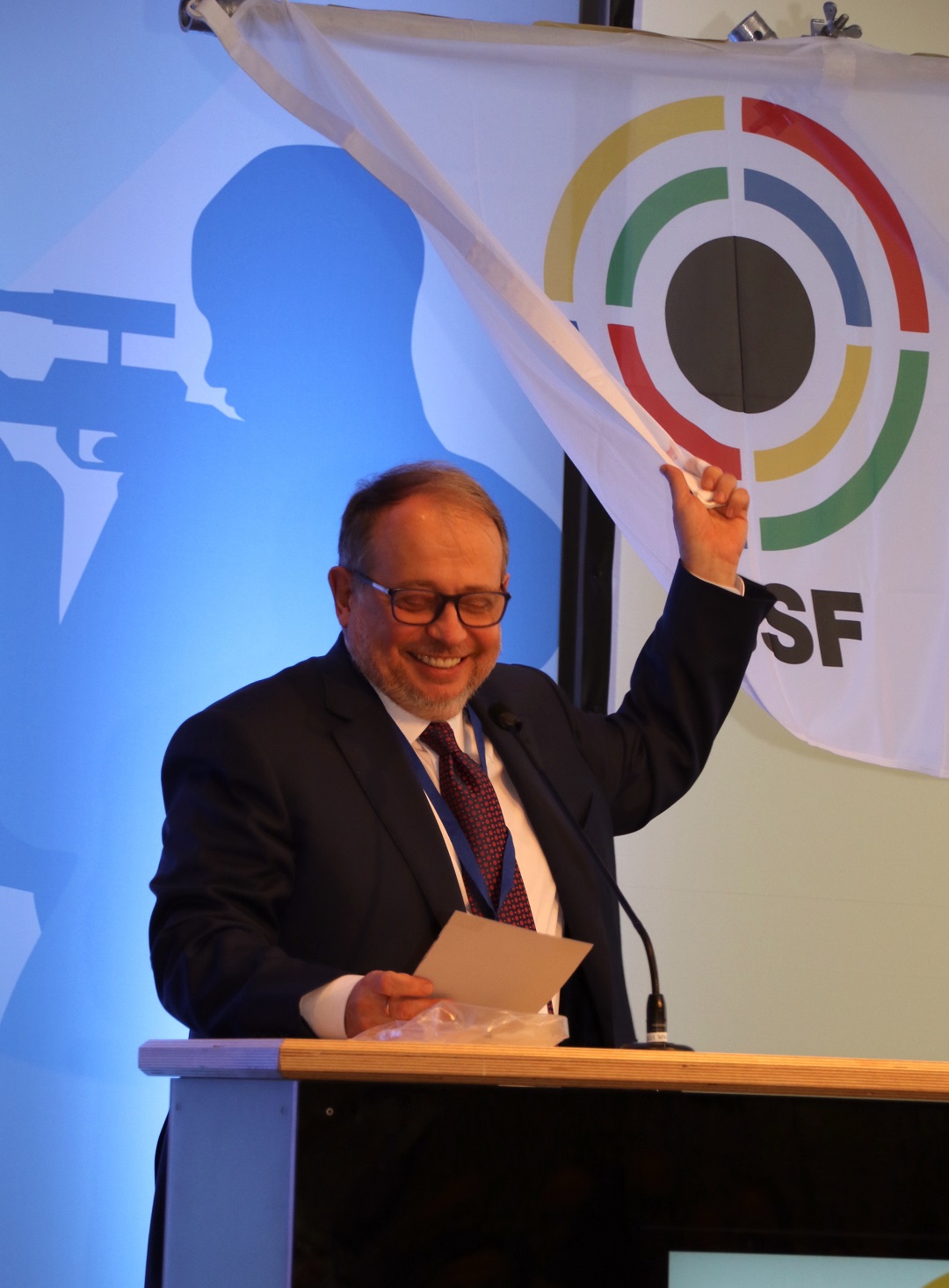 Vladimir Lisin (RUS) is the new ISSF President. He beat Italy’s Luciano Rossi in the succession to the 38-year long presidency of Olegario Vázquez Raña (MEX).

In the ISSF General Assembly held today at the Hilton Park Hotel in Munich, Germany, 136 member federations were present, in addition to 23 proxies, for a total of 159 represented federations and 292 votes, out of the maximum possible representation of 160 member, 147 countries, and 294 votes.

New ISSF President Vladimir Lisin reminded: We have to be united as one Family!

Lisin’s theme was ”We are one family”. He has 10 points programme which seen on ESC Web too. Mr. Vladimir Lisin (62) is a Russian entrepreneur holding Ph.Ds in Engineering and Economics, and the Chairman of one of the world’s leading steelmaking companies, NLMK Group. He practices shooting sport since the age of 14, and has been involved in the management of the sport since years. In 2002, Mr. Lisin became President of the Russian Shooting Union, and since 2009 he has been leading the European Shooting Confederation (ESC). From 2009 to 2013 he served as a member of the ISSF Administrative Council, and since 2011 he is the President of the Summer Olympic Sports Association of Russia. In 2013 he became a member of the ISSF Executive Committee, winning then the votes of the delegates at the 2014 ISSF General Assembly to become ISSF Vice-President. At the same time, he has been serving the IOC as a member of the IOC Commission for Culture and Olympic Education (2006-2014) and in the IOC Marketing Commission (2015- onward).

Today, Mr. Lisin becomes the 7th President of the International Shooting Sport Federation, one of the oldest international federation, founded in 1907 as the UIT (Union Internationale de Tir). He succeeds Olegario Vázquez Raña, a Mexican entrepreneur and titled athlete who led the ISSF for 38 years. Vazquez Raña stepped back this morning, following a decision he had made public in 2014. He was nominated ISSF Honorary President, right after his farewell speech addressed to the Shooting sport family, today.

Today, the ISSF General Assembly elected him as ISSF Honorary President by acclamation, in recognition of his extraordinary contribution to the development of Shooting sport. While proposing his election to the honorary position, Olympic Champions Anbhinav Bindra and Kimberly Rhode said: "Olegario Vazquez Raña has been an Olympian, and he transported the same passion to the administration of Shooting sport. Athletes like us have been empowered and encouraged to help keeping our sport fresh, healthy and strong throughout four decades, thanks to his vision. We respect his decision to step down, but at the same time we would like retain a strong bound with him. That's why we ask the General Assembly to approve the unanimous recommendation of the Executive Committee and of the Administrative Council to elect him ISSF Honorary President."

After the election, Mr. Vázquez Raña said: “This is the last time I am speaking with you as the ISSF President. I am happy but also a bit sad because I consider you my family. I can only say that I fulfilled my duties with integrity, and I have always supported the athletes. I am just a normal person. And I will always be a normal person. You elected me as you Honorary President. So if you invite me sometimes I will come to say hallo, but I will never interfere in the sport. Thank you!”

“While leaving, I wish unity to the Shooting sport family. We are one of the oldest sport, one of the oldest federations in the world, and I am sure that if we stand united, we have a bright future in front of us.”

“I would like to take this chance to thank all the friends, all colleagues, volunteers, freelancers and the ISSF staff members that have been sharing all this with me in the last 38 years. We had been a great team and we delivered! I would also like to publicly acknowledge thanks and much appreciation to my family for being part of this. My wife Brigitte, my daughter Franziska, my brother Wolfgang and my mother always supported me. Finally and most importantly, I thank Mr. Olegario Vazquez Raña for his leadership, support and trust!”

“Good luck to the new leadership and to the whole ISSF, thanked Franz Schreiber who is finishing as the ISSF Secretary General.