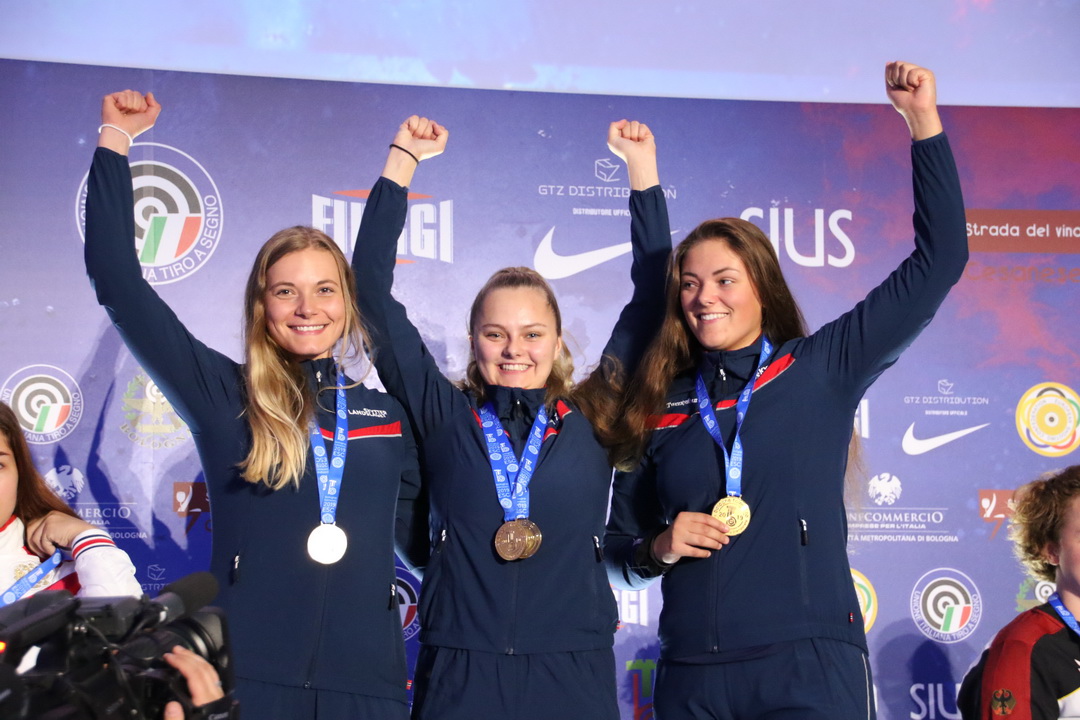 Bologna woke up for the Olympic Events Day slowly, the sky was today again grey, not a lot of wind and not as hot as it was a couple days ago, even cool. Actually it is a perfect day for shooting sport! When arriving to the shooting range Andrea Bocceli’s voice welcomed us. What a nice start for the day.

Super quick Stene used only 63 min for the Qualification

The Women Rifle athletes started their Saturday first with the Qualification. During the Qualification we saw a sensational quick shooting made by Norwegian Jenny Stene. She used only 13min on kneeling. It took only 30 minutes when kneeling and prone was done. Then Jenny made a quite long pause; went to toilet, ate a little bit, took a nap and then started her standing shooting. Her action time was totally only 63 min!!! And her result 1181!!!

When asking her why such a hurry, Jenny looked me and answered seriously: «I had to shoot also the Pistol». Then she exploded for a big warm laugh!

Swiss Nina Christen is the new European Champion and Queen of the 50m Rifle 3 position Women. She ruled nearly the whole final. Only few moments were a little bit “no so good” in prone part but the when she started the standing position she slowly started to be sure that she can win the final. – The final is always the final, it was not so particularly difficult. My standing shooting is strong with me and I was sure that I will make better hits then, explained Nina Christen after the awarding.

She won silver medalist Belarusian Maria Martynova with 3.7 points. The super quick Jenny Stene (NOR) made an excellent shooting and won bronze.

Norwegian Women team made new World and European record 3531. They shot 200 inner tens! The team consisted of Jenny Stene(1181), Jeanette Duestad 1178 and Katrine Lund (1172). The victory of the Team Norway was superior while it won Russian Federation with twelve points and Germany with nineteen points.

In Men’s 3 Positions I wrote that the “North wind” blows in the rifle shooting. So it looked like in the beginning, but as far the final went, the “North wind” started to warmer and finally nearly stopped while the Czech athletes Petr Nymbursky and Filip Nepejchal took the double victory for Czech Republic. The “North wind” showed only weak strength, when Jon-Hermann Hegg climbed up the podium to catch the bronze medal. He made also an excellent run in the end and passed his team mate Simon Claussen, who was finally fourth in the final.

Nepejchal was leading during in the end. After the second last shot Nepejchal was still leading but only 0.1 point. The last shots – Nepejchal made 10.1 and Nymbursky 10.6 and took the victory.

"I didn’t know the situation in the end at all. I’ll made what I could the whole final. It was actually quite easy final this time. I couldn’t be excited", told the new European Champion Mymbusky.

"I’m very happy that Nymbursky won, he made so fantastic shooting in the end", admitted Nepejchal.

Rifle male athletes had the qualification yesterday and the best of the qualification was Norwegian Simon Claussen with excellent result 1182. Norway was the only country who reached all three athletes into the today’s Final. Norway won naturally the team competition; now with new World and European record 3540. The team consisted Simon Claussen (1182), Henrik Larsen (1180) and Jon-Herman Hegg 1178. Excellent top athletes! Silver took Czech Republic (3526) and Bronze traveled to Hungary (3518).