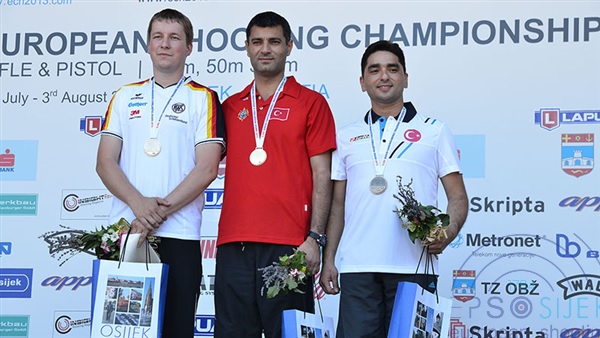 On the last day of the European Championship in Osijek the Turkish athlete Yusuf Dikec received his second personal gold.

He won his first gold in 25m Standard Pistol and today the second gold came from 25m Center Fire Pistol with the result of 590 points (precision 293, rapid 297). He won the gold with difference of two points from the German Christian Reitz (588). To decide who would be the winner of the bronze medal a shoot-off was needed between the Norwegian Paal Hombre and the Turkish Fatih Kavruk. Both received 587 points. In the shoot-off Fatih Kavruk won 50-48 and became a bronze medallist.

In the team competition Turkey won the gold medal, Ukraine won the silver and Finland received the bronze medal. The Turkish victory was superior with the difference of 12 points. The golden result equalled 1741. Ukraine (1729) defeated Finland (1727) by two points. The team of Turkey consisted of Ysuf Dikec (590), Fatih Kavruk (587) and Murat Kilinc (564).