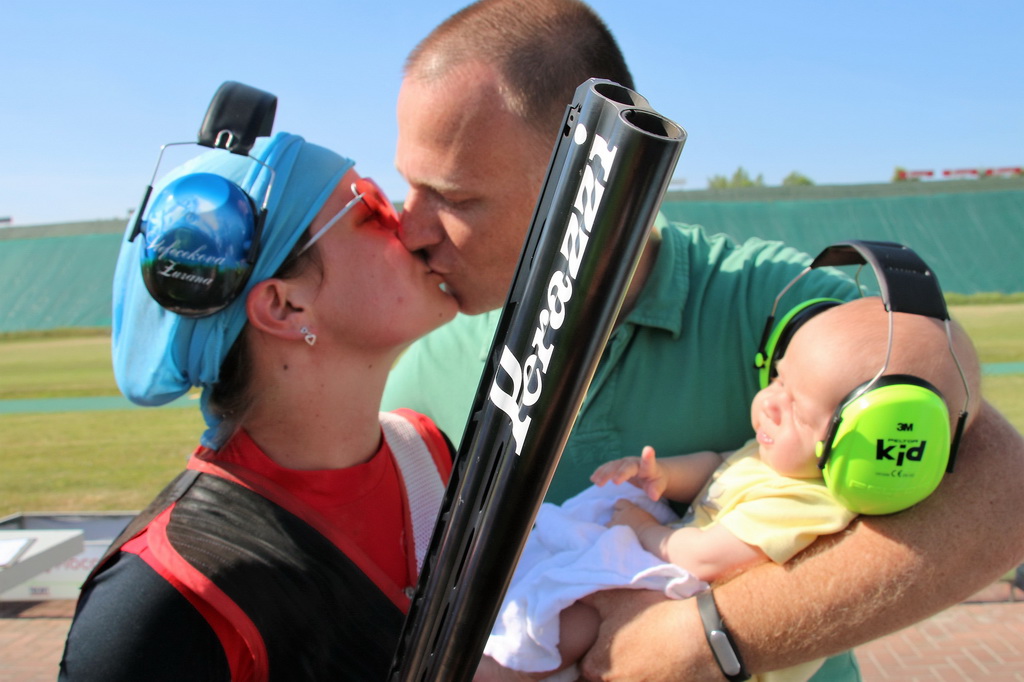 Couple of hours after the opening ceremony the wind arose. It was so rough in the city that the restaurants have to put down the parasols but when entering the shooting range the wind had calmed down. Any way it blew quite well. After the first 25 clays series the wind has gone and the sun shined from nearly clear sky.

Among the sixth qualified athletes who shot all the clays was Zuzana Rehak Stefecekova from Slovakia. She missed one clay only in qualification and continued to the finals from top place with result 74 (25+25+24). The other qualified were Alessia Iezzi, ITA 72 (23+25+24), Fatima Galvez, Spain 71 (23+24+24), Marina Sauzet, FRA 70 (22+24+24), Alessandra Perilli, SMR 70(23+23+24), Silvana Stanco, ITA 70(23+23+24). There needed a shoot off from the last three places among four athletes Sauzet, Perilli, Stanco and Olympic gold winner Jessica Rossi, ITA. Jessica Rossi was the unlucky one who couldn’t win the final place.

The first part of the semi-finals showed what shall happen while Zuzana Rehak Stefecekova and Silvana Stanco shot clearly all 15 clays. So they continued directly to the gold match. Into the bronze match managed to receive Fatima Gavez (13) and Alessandra Perilli. (12).

The Gold Match was the triumph of Zuzana Rehak Stefecekova, she didn’t give any chance for Italian Silvana Stanco so certain Zuzana shot. Stanco missed the 4th clay and also the last one. Rehak Stefecekova shot all the 15 clays.

“This competition was my first competition this year and I didn’t shoot at all since October while I was waiting for my first baby who saw the world end of April. I enjoyed the finals and also the first three rounds and the semi-finals. This is a blessing day for me while I’m for the first time here with my son Nathan”, cheered the new European Champion.

To the question that how it can be possible that after having a baby in April she is back in shooting, Zuzana answered:

“You know all shooters are a little bit crazy and they want to be as soon as possible in the range. My son is so blessed that he sleeps very well, I can sleep also and then also train well. This was all this year, the rest of it I’ll give to my family. I wish good luck for all shooters who are travelling to Rio”, explained newly-made mother Zuzana Rehak Stefecekova with her son and husband.

The Final of Trap Women Junior was a battle of three countries while Italy, Germany and Russia managed to reach all two athletes into the finals. The best of the qualification was Italian Maria Lucia Palmitessa 72(24+24+24), the second was Bettina Valdorf GER, 70(23+23+24). The following qualified were Russians Yulia Tugolukova (68) and Julia Saveleva (67), German Sarah Bindrich( 66). For the last place competed two Italians Isabella Cristiani(64) and Antonia Ricciardi (64). Christiani won the shoot off and took the last final place.

The semi-final was quite tight. Probably the hot weather also influenced to the athletes and made them a little bit nervous.

The two best athletes German Sarah Bindrich and Russian Yulia Tugolukova shot both 12 clays and solved their way to Gold Match and the rest four had to shoot a shoot off while shooting 11 clays. The two strongest in shoot of were Maria Lucia Palmitessa and Julia Saveleva.

In the Bronze match Palmitessa beat Saveleva 12-11 and won bronze medal. In the gold match the numbers were same for Russian Yulia Tugolukova, Gold for Tugolukova 12-11.

Italian women were the strongest in team competition

Italy won naturally the Women’s team competition; we can say that their gold medal was superior while the team of Italy won gold before France with the difference of 5 clays. The Italian team consisted of Alessia Iezzi (72), SIlavano Stanco (70), and Jessica Rossi (70). The Silver medal winner was France with result of 207 (70+69+68) and Spain was third with result of 198 (71+67+60).

Current standings after the Stage 1 (50 clays):