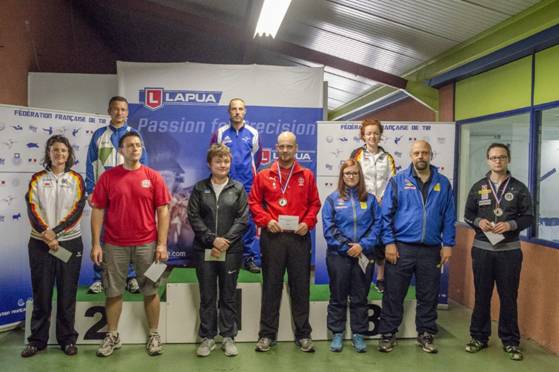 For the first time in the XXI century a shooter managed to obtain a 100 percent result in 300m Rifle Prone Men and to equal the European Record established in 1990 by Harald Stenvaag from Norway.

It happened during the 300m LAPUA European Cup Final 2013 in Saint Jean de Marsacq, France. Cyrill Graff from France won the competitions with a new Equal European Record - 600 points! The runner-up in this event was Anders Brollund from Sweden (598), the third - Rajmond Debevec from Slovenia (597).

In 300m Rifle 3 Positions Men the best result - 596 - was achieved by Marcel Buerge from Switzerland. Second was Ciryll Graff (595), third - Rajmond Debevec (594). The 300m Standard Rifle event was won by Michael Podolak from Austria (584). He was followed by Ciryll Graff and Steffen Olsen from Denmark (both - 582).

In competitions among women Anzela Voronova from Estonia placed first in 300m Rifle Prone with a score of 596 points. Gudrun Wittman from Germany had the second result (595), Olivia Goberville from France - the third (594). In 300m Rifle 3 Positions the victory belonged to Elin Ahlin from Sweden (585). Eva Fridel from Germany was second (584), Marina Schnider from Switzerland - third (581).

As it could be expected Ciryll Graff won the Super Final. His gold result was 1071 points. Rajmond Debevec was second with 1050 points, Eva Fridel was third with 949 points.

Boris Artaud from France won the 25m Center Fire Pistol event with 585 points. The same result was obtained by the runner-up Pierre Michel from Germany. The third place went to Paal Hembre from Norway (583).

Joao Costa from Portugal was the best in 25m Standard Pistol with 576 points. Pierre Michel was second (568) and Hakan Landebring from Sweden - third (567).

Congratulations to all the winners and thanks to the Organizers on behalf of the European Shooting Confederation!

For the photos from the event please click here.