A PERFECT DAY FOR EUROPEAN SHOOTERS IN RIO 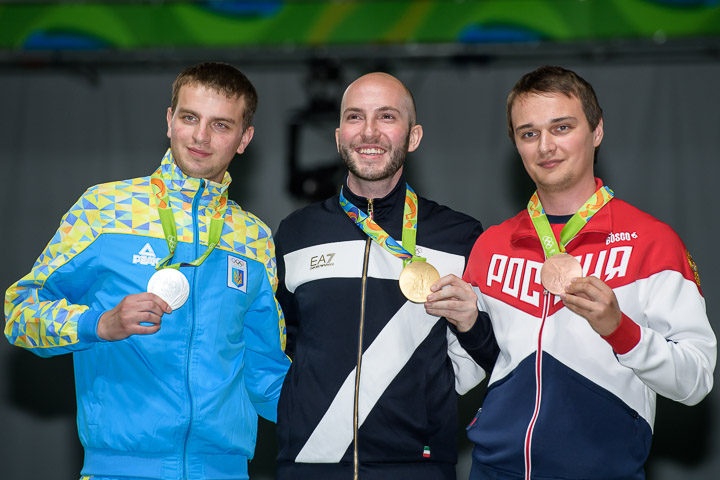 Monday, August 8, was a perfect day for the European shooters at the Deodoro Olympic Shooting Centre. They won six out of six medals in two events that were disputed during the third day of shooting competitions at the Games of the XXXI Olympiad – 10m Air Rifle Men and Trap Men. The new Olympic medalists came from 5 different countries!

Niccolo Campriani from Italy, 2012 Olympic Champion in 50m Rifle 3 Positions, this time was on top of the podium in 10m Air Rifle Men. Serhiy Kulish from Ukraine finished on the second place and Vladimir Maslennikov from Russia – on the third.

Abhinav Bindra, 2008 Olympic Champion and Chairman of the ISSF Athletes Committee, finished on the forth place and he was the only non-European among the finalists in this event. Peter Sidi from Hungary, Illia Chareika from Belarus, Petar Gorsa from Croatia and Oleh Tsarkov fron Ukraine remained in the fiffth, sixth, seventh and eighth positions respectively.

Josip Glasnovic from Croatia beat Giovanni Pellielo from Italy in the Gold Match of Trap Men competitions while Edward Ling from Great Britain was more precise than David Kostelcky from the Czech Republic in the Bronze Match. Massimo Fabrizi from Italy and Ahmed Kamar from Egypt completed the list of semifinalists.

The success of the third day of the competitions at the Deodoro Olympic Shooting Centre is very significant for the European athletes because during the previous days they won only two medals in four events - 10m Air Pistol Women, 10m Air Pistol Men, 10m Air Rifle Women and Trap Women. Vitalina Batsarashkina from Russia was the second and Anna Korakaki from Greece finished third in Air Pistol Women.