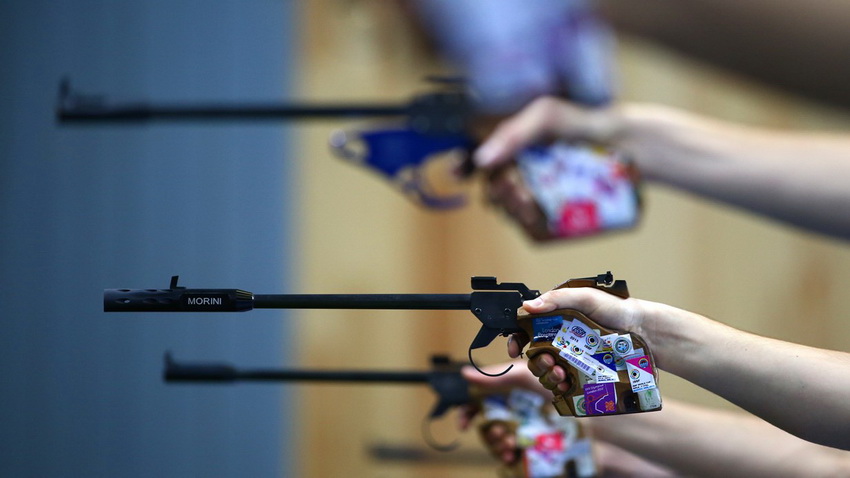 On Saturday morning Damir Mikec from Serbia became the first two-times European Games Champion. After the victory in 10m Air Pistol event he won the gold medal in 50m Pistol competitions with 192,2 points. The runner-up was Pavol Kopp from Slovakia with 187,5 points. Besides the silver medal he became owner of the Quota Place to the Olympic Games in Rio-de-Janeiro. Abdhulla Omer Alimoglu from Turkey finished on the third place with 167,1 points.

The winner and owner of the Olympic Quota Place in 25m Pistol competitions became Heidi Diethelm Gerber from Switzerland. In the Gold Match she was more precise than Antoaneta Boneva from Bulgaria who set the Games Record in Qualification with 585 points. The score of the Final was 8-4. In the Bronze Match Monika Karsch was more successful than Yuliya Alipova from Russia (7-5).

28 shooters took part in the event.

The Gold Match in the Skeet Women's competitions was a real thriller. Amber Hill from Great Britain and Diana Bacosi from Italy had to make 46 shots each to determine the winner! After the regular 16 shots the score was 15-15 and only in the shoot-off that ended with the score 30-29 the 17-year young British shooter managed to become the winner of the gold medal and of the quota Place to the Games of the XXXI Olympiad.

Before the decisive miss in the Gold Match Diana Bacosi consequently hit 120 targets. Her result in Qualification - 75 hit targets - is a new World, European and European Games record that can be only equaled but not beaten.

In the Bronze Match Chiara Cainero from Italy was more precise than Danka Bartekova from Slovakia (16-15).

19 shooters took part in the competitions.

All photos by Tom Pennington/Getty Images for BEGOC