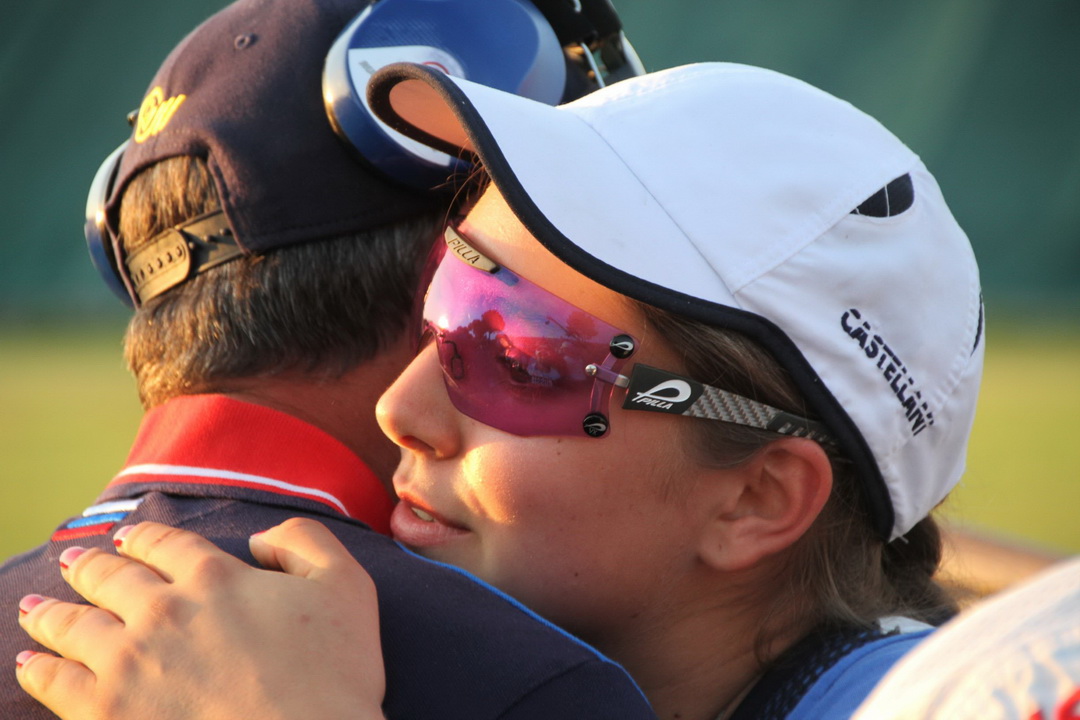 The European Championship Shotgun competitions continued on Friday at the “Trap Concaverde” Shooting Range in Lonato. Skeet Women and Skeet Women Junior both shot the last 50/125 targets and the finals in good weather conditions. The temperature was +27 Celsius, it was sunny and hardly any wind.

Iryna Malovichko (UKR) was in the lead after the first day with an excellent result of 74. She continued her steady shooting and finished as a number one of the qualification (121). Malovichko was followed by four women who hit 119 targets: Andri Eleftheriou (CYP), Danka Bartekova (SVK), Diana Bacosi (ITA) and Barbora Sumova (CZE). Nur Banu Ozpak (TUR) took the sixth place in the final with the result of 118.

Of the finalists Bartekova, Eleftheriou and Italy (2) had a quota place obtained to Tokyo 2020 before the ECH final.

Bartekova won the gold medal after a steady shooting. She took the lead in early competition and stayed on the top till the end of the final. After 50 targets Bartekova had a 2 point lead. Eleftheriou was in the second place (48-46). The difference was only one point after 56 targets, and finally Bartekova won the European Championship 56-55. Eleftheriou won the silver medal.

Bartekova was – of course – very happy about her gold medal. She had a big smile on her face after the competition was over and also in the victory ceremonies.

Diana Bacosi (ITA) hit 34 targets and finished in the fourth place. Nur Banu Ozpak (TUR) took the sixth place with the result of 13.

Eva-Tamara Reichert (GER) hit 118 targets in the qualification of Skeet Women Junior. Her result equalized the European record of Junior Women. Reichert was followed by Elizaveta Evgrafova (RUS) whose result was 117. Vanesa Hockova (SVK) hit 116 targets and finished the third in the qualification. Raveca-Maria Islai (ROU) and Johanna Wedekind (GER) qualified to the final with the result of 114. Elena Bukhonova (RUS) was the sixth qualifier (113).

Bukhonova was in the lead in the final after 20 and 30 targets. Hockova took the lead after 40 targets. She was leading the final also after 50 targets. Reichert was 2 points behind her (42-44). Finally Reichert won the gold medal. Her winning points were 51-50, Hockova finishing the second. Bukhonova got the bronze medal, her result was 39.

Skeet Men and Skeet Men Junior started their competition on Friday (50/125 targets). The last 75/125 targets and finals will be shot on Saturday.

Tammaro Cassandro (ITA), Dimitris Konstantinou (CYP), Timo Laitinen (FIN), Emmanuel Petit (FRA) and Tilo Scheier (GER) hit all 50 targets so they are in the lead after the first day of Skeet Men. Twelve men finished the opening day with the result of 49 targets.

Of these nine men Pesonen (FIN) is the only one who is not competing in ECH.