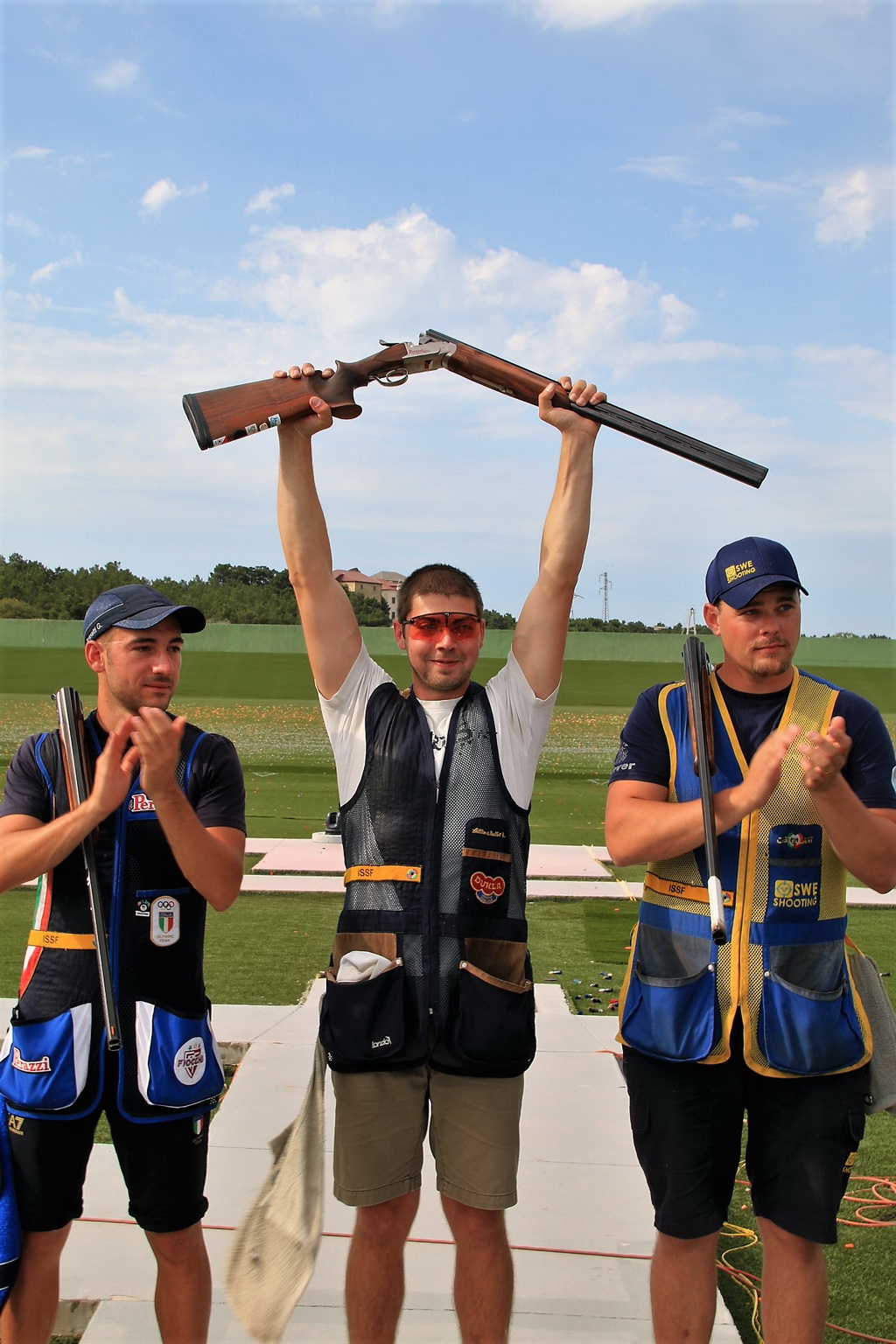 The Skeet Junior Men finished with new World and European Record made by Danish Johan Birklykke. Birklykke’s performance was amazing. He started strongly by making clear hits. Only when he was shot 12 stages he missed once. He missed totally only five clays in the very difficult conditions. Birklykke beat Italian Elia Sdruccioli finally by two clays Birklykke’s World Record result is now 55 in the finals, Sdruccioli 55. The Bronze Medal travelled also to Denmark with Emil Petersen with result of 42.

In the team competition Italy won the European Championship title before Denmark. Italian gold result was 352 and Denmark made 350 hits. Bronze team was Cyprus. The Italian team consisted of Elia Sdruccioli (120), Valerio Palmucci (117) and Erik Pittini (115).

Slavicek surprised the Olympic Winner Rossetti in shoot off.

The men’s Skeet was as tight as Men Juniors. Finally the final ended to the shoot off between Czech Milos Slavicek and Italian Olympic Champion and multi medallist Gabriele Rossetti. Slavicek had the key to win directly the match before the last clay, but he missed it. In that moment Slavicek was leading the competition with one clay. So both athletes Milos Slavicek and Gabliele Rossetti finished the final to an equal result (54) and it meant shoot off. It was needed 11 clays before the Gold medal was clear.

The shoot of finished after 11 hits for Slavicek in the last stage where athletes shoot four clays. Slavicek shot first and hit all. Rossetti’s turn; first two clays hit perfectly, but then came Rossetti’s black moment. He missed following to clays and the Match was over. Slavicek won gold and the multi medallist Rossetti was beaten.

“It was very difficult competition while it was very windy and there weren’t any easy clays. Also the competition was very long. I’m very happy that I managed so well in this my first final in men’s category. This was a wonderful competition, I didn’t expect to win this and I’m a little bit surprised about what happened. I knew that I’m in condition but this surprise me too under the high pressure. I’m very happy man now”, explained Milos Slavicek and received tens of congrats of his fans and team mates.

The bronze medal winner was Stefan Nilsson from Sweden with result of 43 clays.

Italy won silver with result 359 before Sweden who hit 357 clays.