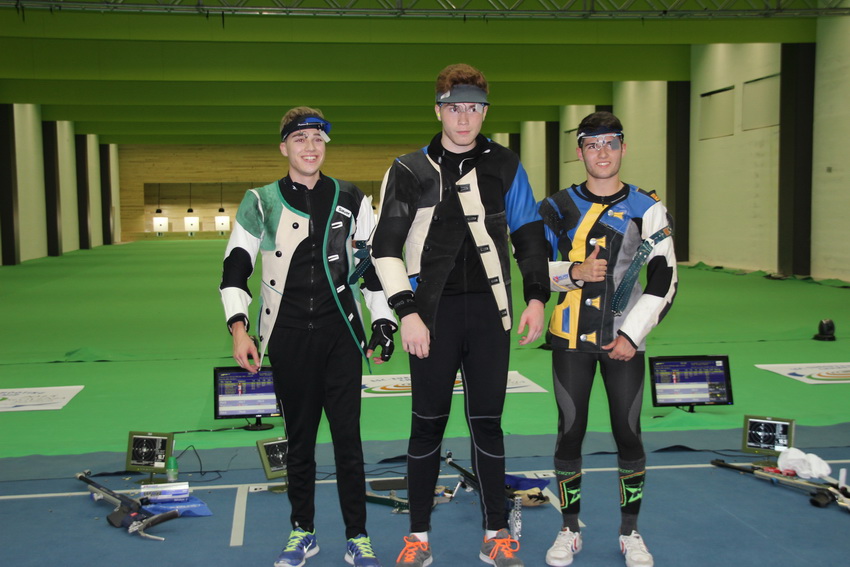 Eight sets of medals in individual events and three Quota Palaces for the Games of the XXXI Olympiad were disputed in Maribor, Slovenia, where the European Championship is taking place.

The 50m Pistol Men event was won by Joao Costa from Portugal who scored 188,8 points. Due to the fact that he had obtained an Olympic license before, the two Quota Places available in 50m Pistol Men went to the silver and bronze medalists of the 2015 European Championship – Francesco Bruno from Italy (187,4 points) and Sergey Chervyakovskiy from Russia (168,6 points).

Russia was on top of the team classification in this event with 1664 points, Belarus finished on the second position (1651 points), Italy – on the third (1644 points).

One Olympic Quota Place was available in Trap Women. It went to the winner of the competitions Zuzana Rehak-Stefecekova from Slovakia. In the Gold Match she was more precise than Ekaterina Rabaya from Russia (11-8). In the Bronze Match the 2012 Olympic Champion Jessica Rossi from Italy hit 13 targets while her rival, Delphine Reau from France, only 11.

In the team classification the best result was shown by the trio from Italy (211 points). Slovakia was second and France – third (both with 210 points).

The participants of the Double Trap Men disputed only medals this time. The gold went to Daniele Di Spigno from Italy. In the Gold Match he hit 29 targets, his rival, Hakan Dahlby from Sweden, 22. Andreas Loew from Germany could be declared the winner of the Bronze Match with Marco Innocenti from Italy only after a long shoot-off. Both finished the Match with 29 hit targets. The score of the shoot-off was 29-28 in favor of the German athlete!

Great Britain was the best in the team classification with 420 targets, Italy finished on the second position (417 targets) and Russia – on the third (also 417 targets).

Five sets of medals were disputed in the individual Junior events.

Alexandar Todorov from Bulgaria won the 50m Pistol Men Juniors with 186,2 points. Second was Anton Zanin with 182,7 points and third – Alexander Bassariev with 163,4 points (both from Russia).

In the Gold Match of the Double Trap Men Juniors competitions Viacheslav Yakimenko from Russia was more precise than Ignazio Maria Tronca from Italy (28-27). In the Bronze Match Kirill Fokeev from Russia hit 29 targets, his rival, Nathan Lee Xuereb from Malta, hit 28 targets.

Italy was on top of the team classification in this event (385 targets) followed by Great Britain (384).

Italy obtained the victory in the team classification with 201 targets. Russia was on the second position (186 targets), Great Britain – on the third (181 targets).

The second Finals World and European Records of the week-end were established by Jean Quiquampoix from France. He won the final of the 25m Rapid Fire Pistol Men Juniors event with 31 points! Second on the podium was Lukas Skoumal from the Czech Republic (20 points), third – Viacheslav Perelygin from Russia (18 points).

France was on top of the team classification in this event with 1708 points followed by Russia (1670 points) and Germany (1652 points).