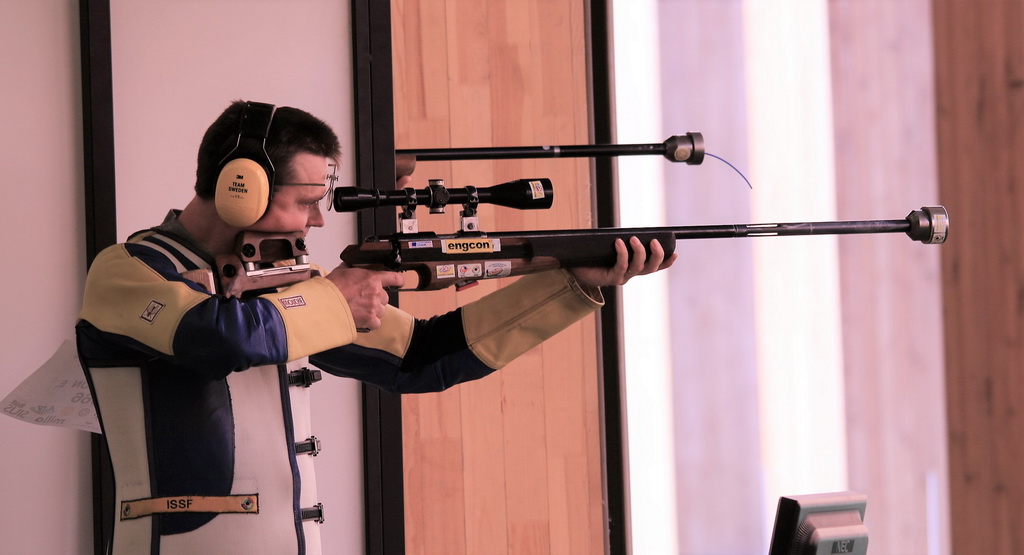 The last day in the city of wind and fire, Baku Azerbaijan. Last competition 50m Running Target Men and Men junior. Weather as beautiful as earlier, the wind was minimum when entered from bus to the Baku Shooting Centre.

Inside the main corridor nice cool air welcomed you, air condition – what a marvellous issue. When entering to the Running Target ranges which have been built into the same range as 50 m and 300 m rifle took place, the situation changed dramatically. Temperature nearly the same as outside and nearly no wind, very sweaty.

Oh, it was not my meaning to write a journey diary. So, let’s go to the point – Running Target Mixed!

In this competition athletes shoot two times twenty shot, together 40 shots. Athlete gets either slow or fast run, but equal number and in mixed order from both sides.

After the first stage Emil Martinsson(SWE) was on the top position as yesterday too. He shot 198(98+100). On the second position was Hungarian Laszlo Boras 196(99+97) and on the third position Russian Dmitry Romanov 195 (98+97). With the same results as Romanov there were at that moment three other athletes: Mikhail Azarenko (RUS – 98+97), Heikki Lähdekorpi (FIN – 100 + 95) and Topi Hulkkonen (FIN – 97+98). Yesterday’s winner Jesper Nyberg is on the 9th position, six points behind the leader Martinsson.

Emil Martinsson did not let happen what happened yesterday. His concentration was perfect. Martinsson’s result from the second stage was the best 197. To the same result achieved only Mikhail Azarenko. Finnish rookie Topi Hulkkonen made also an excellent performance in his first 50m Championships. Before the last shot he was second. The young athlete tried to concentrate but he could keep it enough well, the result of the shot was 8, but it reached to the bronze medal.

The team competition won Russian Federation with result 1169, with the difference of two points before Sweden (1167). Finland won the bronze medal (1161).

In Men Junior competition after first stage Ihor Kizyma (UKR) was leading with result of 193 (96+97), Andreas Bergstroem(SWE) was only one point behind him and on the third position there were Valerii Davydov(RUS) and Roman Tovstopiat(UKR) with result of 189.

In the second stage Ukrainian Ihor Kizyma kept his lead until to the end. He shot in the second stage 194 and won gold with total result of 387. Andreas Bergstroem (SWE) kept his position as second too by shooting 187, total result 379 (192+187). Russian Valerii Davydov shot also the second stage strongly 189, but his team mate Jaroslav Klepikov shot even better 194. These two athletes received the same result, so it was needed a shoot off. Davydov was stronger and won the shoot off 20-19. Bronze to Davydov with result 378 (184+194).

In the Grand Prix team competition of 50m Running Target Mixed the winner was Ukraine and second Russian Federation. Ukrainian winning result was 1134 and the team consisted of Ihor Kizyma (387), Roman Tovstpiat (375) and Maksym Babushok (372).