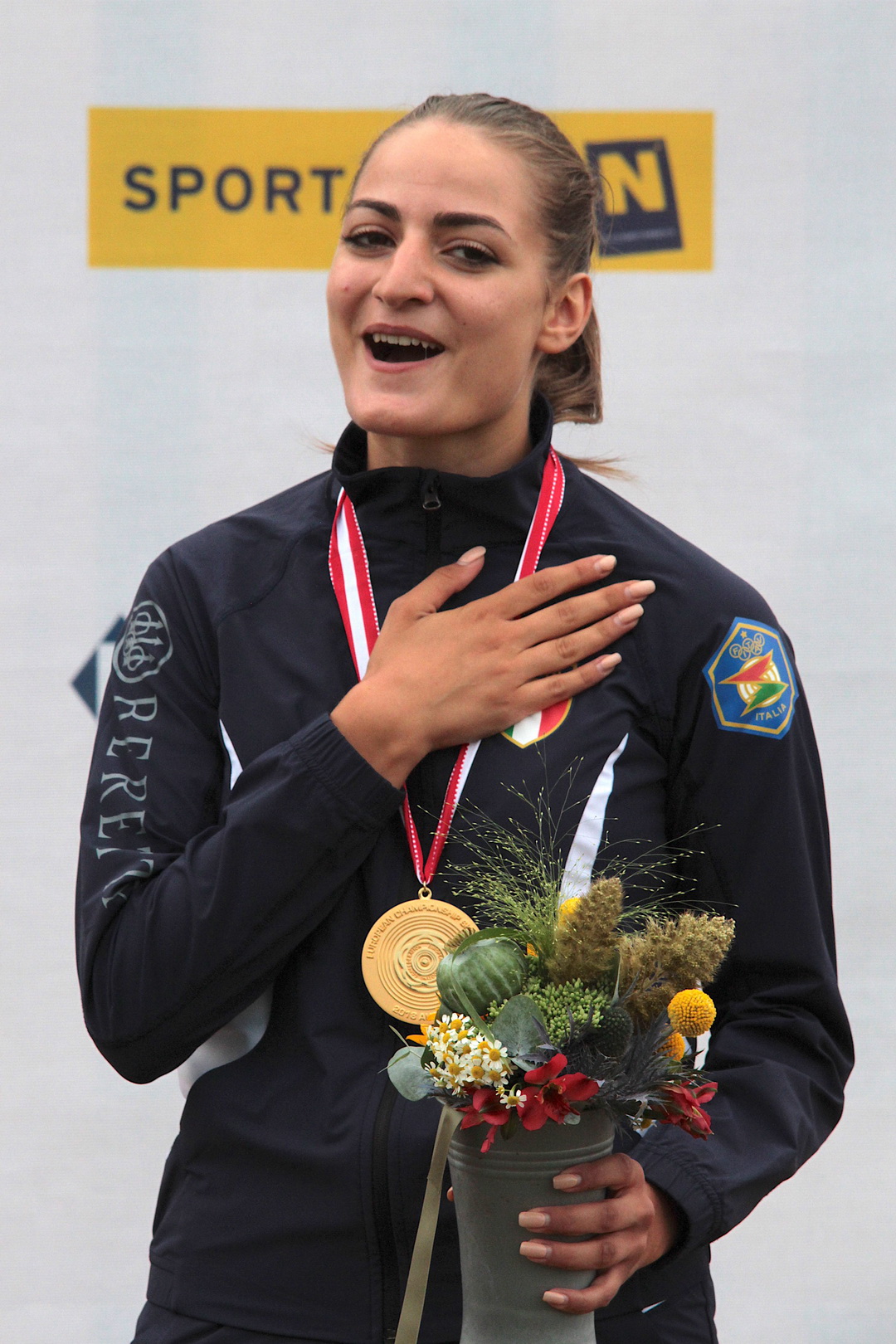 The Trap Women Junior Qualification finished by the victory of Daria Semianova. Semianova kept her leading position during the last two runs and reached the place to the final. Her result was 119. Second place to the final took Italian Sofia Littame with result 116. Loemy Recasens from France who hit 113 clays was the third lucky one. Rebecca Aimee Fergusson (GBR) and Erica Sessa (ITA) shot both 112. Fergusson was after shoot off fourth in the qualification. The last lucky one who reached the final’s place was Fergusson’s team mate Lucy Charlotte Hall with result 111.

After hard and sweaty day was the last step for those lucky ones – the Final. The clouds had been sailing slowly the whole day and had come more and more darken in the sky.

The final was from the beginning to the end a battle Russian Daria Semianova and Italian Erica Sessa. During the final Semianova made two times a triple foul (3 clays) but she finally concentrated herself so fine that before last two clays both had hit 36 clays. Clay number 49 – both hits. The last clay – Erica Sessa breaks it, but Daria Seminova misses. Erica Sessa will be the new European Champion in Trap Women Junior.

"It was a very hard day, the whole day. I tried my best hard all time and the result was the gold medal. When I came to the final I felt great and I decided to continue my good shooting and I managed. When Daria was leading in the beginning I was not hesitated while I wanted the victory so much and I knew that I can do it also. So I did! I’m feeling so happy, belissima! Sorry but, I’ll stop this interview while I want to call my daddy", apologized the new European Champion Erica Sessa.

So of course we let her call her parents and feel their congratulations and feelings. Sessa’s victory came with result 38-37. The winner of bronze medal was Rebecca Aimee Fergusson who made also a good final.

Murat Ilbilgi is a new Champion

Theo Andrew Ling continued good shooting in Trap Men Qualification by shooting 123 – only two misses, but French Clement Bourgue shot the same result. Finally after the shoot off, the best of qualification was French Bourgue by hitting 7 clays instead of Borgue’s six clays.

Next lucky ones for final were Italian Matteo Marongiu (122) and Murat Ilbilgi (121) and Fabio Beccari (120) from Czech Republic. From the last final place it was needed shoot off between 119 result shot Adria Martinez Torres (ESP), Jan Palacky (CZE) and Manuel Vieira Da Silva (POR). The shoot off and last final place won Manuel Vieira Da Silva by shooting 7 clays instead of Palacky’s and Martines’s 6 clays.

Andrew Ling started strongly the final, but he started to hesitate. Three not so perfect shots before a triple miss (clays 13, 14, 15) was too much and he dropped from top battle. Turkish Murat Ilbilgi, French Clement Borgue and Chezch Fabio Beccari shot well and kept the medal positions into the end. Beccari couldn’t climp up after his triple miss and he has stay third. Anyway he made strong shooting in the middle part of the finals.

Finally it was a due of French Clement Bourgue and Turkish Ilbilgi. When 40 clays had been shot Ilbilgi was in the lead 31-28. Bourgue missed the 41st but Ilbilgi hit it. Next two clays both hit, and then Ilbilgi misses. Bourgue hits the rest clays but Ilbilgi misses two last ones, but wins the Championship with the difference of one target with 38-37. So the 41st clay was the clay which was the most dangerous clay in this final.

"It was very hard and sweaty day but I decided that it can’t disturb my shooting now when I have a possibility for good result. I believed myself and after 25 clays I thought that I can win a medal even I missed two next clays. Fortunately I could concentrate enough well so I could win the gold medal. I would like to be a next World Champion", enjoyed Murat Ilbilgi who won the European Championship for first time.