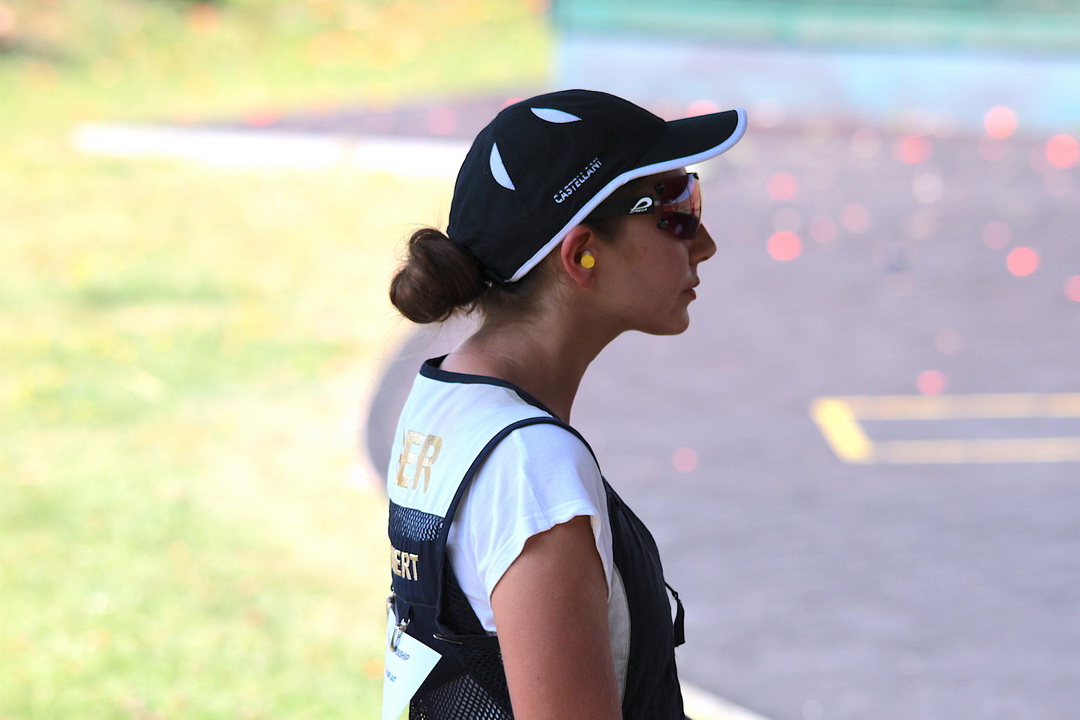 Wednesday, 8th of August. The air outside feels very cool when entering out from hotel room for waiting the transportation to Shooting park Leobersdorf. How nice and relaxing.

Mild wind is blowing slowly at range. Nice beginning for the day. But this is only the half of the truth. After two hour the situation has changed; thermometer show + 34C in shadow, but in the sun, it must be over + 40C absolutely. So far hottest day, and in the programme, there stands Skeet Women and Men Juniors qualification and the competitions will start at 12.30. Wow, sweaty afternoon but we do not complain. An old anecdote says that warmness does not break the bones!? Any way there is 46 male and 23 female junior athletes in the same boat!

CZE Richard Klika is keeping the leading place after 75 targets. He misses one target and his leading result is now 74. Emil Kjelgaard Petersen (DEN) was one of those finished the first day by shooting full score – 25 clays. He is now at second place with result 73. Elia Sdruccioli (ITA) had also a strong last round (25) and he shares the second place with Danish Petersen. There are eight athletes in result 72, among them Finish Eetu Kallioinen who had two perfect full rounds. The others who have the same result are: Alessandro Calonaci (ITA), Alexander Karlsen (DEN), Vlad -Mihail Ghetu (ROU), Onur Atak (TUR), Nicolas Lejeune (FRA), Andrei Danilenkov (RUS) and Eetu Kallioinen (FIN).

Of course when giving in two clays, it is quite a lot, but many things can happen during the second day. It has been seen quite many times. Thursday will be very exciting!

Russian Zilia Batyrshina was leading after 50 targets in Skeet Women Junior. Her leading result was 48, only one clay in front of Esmee van der Veen (NED), Anna Zhadnova (RUS). Their result after 50 target was 47.

Now in the end of the first day Zilia Batyrshina still leads. Her last round was perfect 25, so her result for tomorrow is 73. German Eva-Tamara Reichert made also a perfect third round by shooting also 25 and she has taken the second position after the first day with result 70. Esmee van der Veen from Netherlands has the same result as Reichert. Czech Zuzana Zaoralova on the third position (69) and her team mate Anna Sindelarova fourth only clay behind with Anna Zhadnova.

We’ll see tomorrow a fine shooting sport and Skeet day when the juniors will continue and Men Women start their competitions.