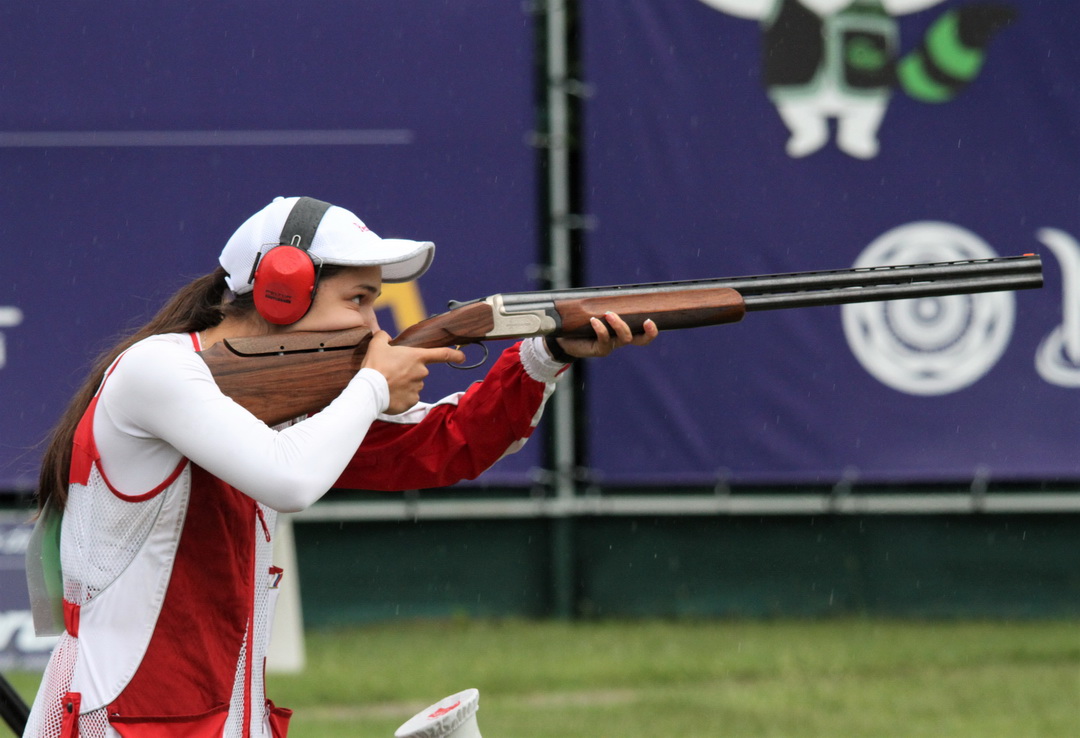 Semianova won Trap Women on Friday, and Molne Magrina was the number one in Trap Women Junior. Semianova and Alessandra Perilli (SMR) obtained the Quota Places to Tokyo 2020.

The European Championship Shotgun competitions continued on Friday at the “Trap Concaverde” Shooting Range in Lonato. The shooting conditions were not as perfect as this week before. The temperature was +17 Celsius, and there was in the morning a hard wind – and unfortunately heavy rain too. The weather did not feel not very nice after a lot of sunshine and warmth this week. The rain stopped before the midday but started again just before the finals started.

The first events of the ECH were finished today: Trap Women and Trap Women Junior. They both shot the last 50/125 targets and the finals today.

After the qualification the ranking in Trap Women was the following: Fiammetta Rossi (ITA) was on the top with the result of 118, Daria Semianova (RUS)and Jessica Rossi (ITA) hit five targets less (113). Maria Quintanal Zubizarreta (ESP) did well too and was the fourth qualifier (112).

Alessandra Perilli (SMR), Silvana Stanco (ITA) and Fatima Galvez (ESP) hit the result 111 and moved on to the shoot off. After the shoot off Stanco and Perilli took place in the final.

In Lonato athletes compete for the medals and also for 8 Tokyo 2020 Quota Places – 2 in each of the individual Olympic events: Trap Men, Trap Women, Skeet Men, and Skeet Women.

In Trap Women the Olympic quota place had already obtained eight European shooters before the ECH Lonato. Six of them competed in ECH. Because Italy already had the maximum number of Quota Places in the event (2) and there were three Italian shooters in the final (Fiammetta Rossi, Jessica Rossi and Stanco), there were three athletes in the ECH Final who could obtain a Quota Place place: Semianova, Quintanal Zubizarreta and Perilli.

The name of the game was again clear: the best two of three will win the Quota!

Semianova had a perfect day despite of the rain: she won the gold medal, obtained the Quota Place and set a new Women Junior world record in the final.

– I am now very happy! I thank my family and federation. This was a big surprise, and I could not believe I will win the gold and get a Quota Place. My first round was only 18, Semianova said with a big smile.

– This was a special day, and I got a big help from my coach and the team members. 17-year-old Semianova said. She is from Lipetsk, 500 kilometers from Moscow.

The final was a tight competition between Semianova and Jessica Rossi (ITA). Semianova won finally by one point (45-44). They were tied 43-43 after 48 targets, but Rossi missed the 49th target, and they both hit the last target.

Alessandra Perilli (SMR) took the bronze and the other Quota Place (36). Semianova and Perilli secured the Quota Places after 25 targets, when Quintanal Zubizarreta (ESP) finished in the sixth place (17).Stanco was fourth (27) and Fiammetta Rossi fifth (21).

Mar Molne Magrina (ESP) hit the best result in the Trap Junior Women qualification (114), and Sofia Littame (ITA) was the second best (112). Polina Kniazeva’s (RUS) result was 110, Maria Coelho de Barros’s(POR) and Nadia Bulhakova’s (UKR) 108. Kathrin Murche (GER) and Jessica Hayward (GBR) shot 106 and continued to the shoot off. Hayward qualified to the final with the result of 1-0.

Molne Magrina took the lead in the beginning of the final and did not give up that position. She hit 39/50 targets and won the gold medal. Littame took the silver with the result of 37 and Maria Coelho de Barros (POR) the bronze (28).

– I am so happy that I even cannot describe it, the European Champion said. Molne Magrina and Semianova are both 17 years old.

Molne Magrina, from Tarragona, was very surprised of her win:

– This is a big surprise!

Trap Men and Trap Men Junior started their competition today. The finals are on Saturday.

Borko Vasiljevic (SRB) and Marian Kovacocy (SVK) are on the top two positions after the first day of Trap Men qualification with the result of 49. Denis Vatovec (SLO) and Mauro de Filippis (ITA) hit 48 targets and are in the third and the fourth position. Ten men hit 47 targets.

Eight European shooters in Trap Men have already obtained the Tokyo Quota Place before the ECH. They are Josip Glasnovic (CRO), Andreas Makri (CYP), David Kostelecky (TCH), Alberto Fernandez (ESP), Matthew Coward-Holley (GBR), Joao Azevedo (POR), Aleksei Alipov (RUS) and Erik Varga (SVK). Coward-Holley is the only one of them who is not in the ECH.