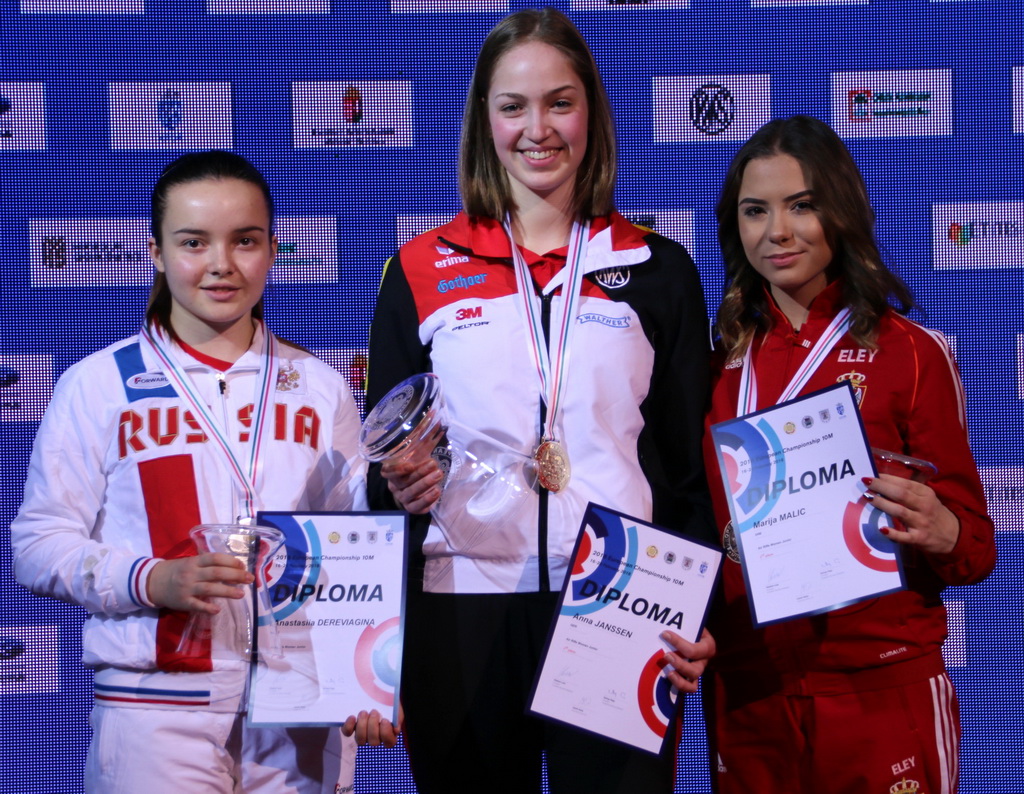 Junior Women started their job in 10m Air Rifle in Györ and the result of the Qualification was not more or less than Qualification World and European record.

The record breaker was Serbian Marija Malic whose result was 625.7. Excellent start for her! The qualification was very strict while Malic won the qualification only with 0.1 point before Russian Daria Boldinova 625.6. Third was Danish Stephanie Grundsoee (625.4). Russian Federation managed to get three athletes into the finals while Tatiana Kharkova was fourth and Anastasiia Dereviagina sixth. German Anna Janssen, Jeanette Duestad and Italian Sofia Benetti were the rest athletes who managed to have the finals places.

The final of the 10m Air Pistol Women Junior was as excellent show as the YOG competition on Sunday. The young athletes made marvelous hits and I can say that it was one of the most amusing finals I ever seen.

In the beginning of the final German Anna Janssen was leading after 15 shots. Then it looked that the final will be the duel of Russian Dereviagina and Kharkova, but then Anna Janssen rushed back to lead by shooting 10.6 and 10.9. The rest was history and Anna Janssen was finally crowned as the European Champion with new European record (250.3). Dereviagina couldn’t push Janssen from even she shot also well (10.7, 10.6, 10.9 etc) while among the excellent shot belonged also one 9.9 and that hit was too much.

“When the final started I was very nervous and I was not at all sure what will happen but finally I handled my nerves quite well. I was not satisfied for my qualification shooting and it made me nervous to the finals. My technique was not good. I returned back to my usual rhythm at the finals”, explained the new European record holder and champion her competition. “I have been competed already in many international competitions and also in finals, so this was not so unusual but still I was very nervous”.

Sixteen years old Anna Janssen is aiming to World Championships and to the Olympics, perhaps we see her on the podium in 2024 Olympics.

The new European record is now 250.3 made by German Anna Janssen, the silver medalist is Anastasiia Dereviagina (249.2) from Russian Federation and bronze medal travels to Serbia with Marija Malic (226.8) who arouse finally on the podium after excellent shooting and battle against Russian Tatiana Kharkova.