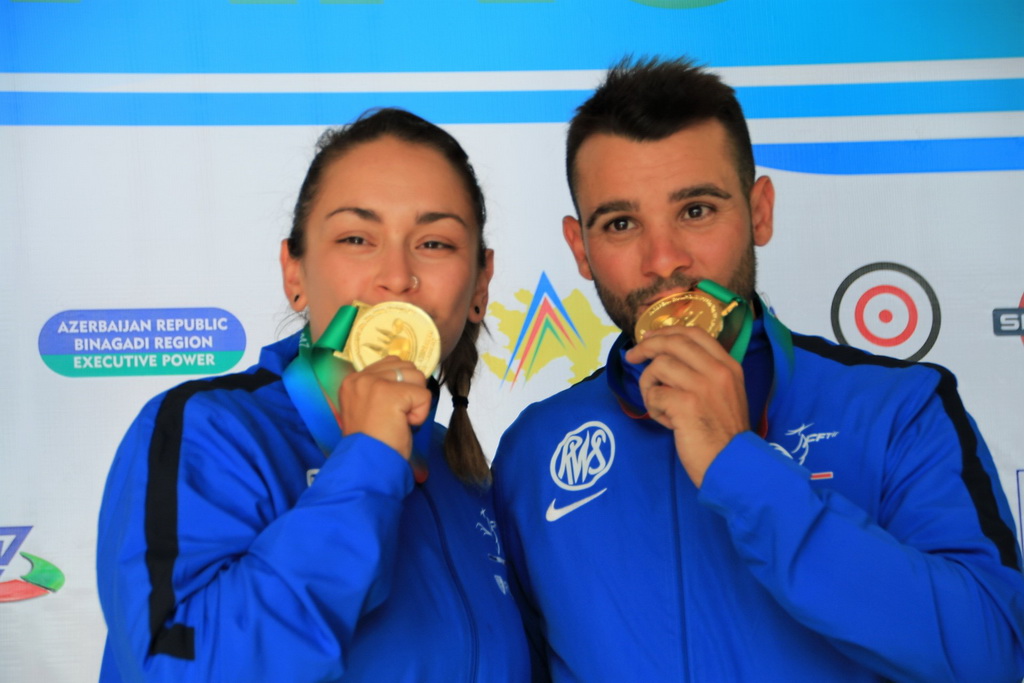 Twenty mixed teams competed from the European Championship in Baku in the last shotgun event. The weather was probably warmest during the competition week. The Qualification competed in the morning and under the afternoon burning sun were the semi-finals and finally medal matches.

The best of the qualification was Italian team 2 (Katiuscia Spada/ Riccardo Filippeli) with result of 97 but after shoot off. The same result received also Italy 1( Diana Bacosi/Gabriele Rosetti) and France 1( Lucie Anastassiou/Anthony Terras). In the shoot off Italian team 2 was strongest (12), Italy 1 with 11 clays and France 1 was third with 1 clay. The other qualified teams were Azerbaijan 2 (96 – Rigina Meftakhetdinova/Fuad Gurbanov), Great Britain (95, shoot off 2 – Amber Hill/Ben Llewellin) and Cyprus (95, shoot of 1 – Andri Eleftheriou/Dimitris Konstantinou).

There were two “packages” at the semi-finals part: FRA 1, ITA 1, GBR, in the second “package there were CYP 2, AZE 2, ITA 2. Form packages the winners received the place to Gold Match, those were second got place to the bronze match and third couple competed from the places 5 and 6.

In the bronze match received their places Italy 1 and Azerbaijan 2 and to the gold march rushed France 1 and Cyprus 2. Great Britain and Italy 2 solved places 5-6, where Great Britain beat Italy with result 21-19.

In the Bronze match legendary Italy 1 (Rossetti/Bacosi) did not give any possibilities to the young Azerbaijan team Italy won it with result 28-24.

In the Final Matches athletes will shoot 16 clays. After two stages Cyprus was leading France 15-14. In the third stage Cyprus was leading still 23-21. In the last stage Antony Terras (FRA) hit all four clays and Lucie Anastassiou hit 3 (one miss). It was Cyprus turn to shoot. Dimitris Konstantinou unfortunately missed one and Andri Eleftheriou couldn’t handle the pressure and surprisingly missed three clays. The Gold Match was over; Gold for France with result 28-27.

The other discipline of August 2 which was running in Baku Shooting Centre was the 50m Running Target Men and Men Junior. In Men’s competition after the Slow Runs Emil Martinsson was leading with result 299. On the second place was his team mate Jesper Nyberg with result 297. On the third place with same result of 296 were Yehor Chyrva from Ukraine and Lukasz Czapla from Poland.

After the Fast Runs the Crown of the 50m Running Target was given Jesper Nyberg from Sweden with result of 591 (297+294). Emil Martinsson failed a little bit in the fourth series by shooting 95 while Jesper shot 99. From the third and fourth place it was needed a shoot off between Bedrich Jonas (CZE) and Mikhail Azarenko (RUS) while the both shot 586. In shoot off it was needed four shots while both shot first 20, but then in “the second round” Bedrich Jonas managed shoot two tens while Mikhail Azarenko 10 and 9.

In Junior Men side on the leading place were two Ukrainians; Maksym Babushok and Ihor Kizyma with result of 294 and On the third place was Espen Nordsveen from Norway (292). After the fast runs the winner of 50m Running Target Men Junior was finally Ihor Kizyma, whose result was 582(294+288). The Ukrainian double victory broke Russian Valerii Davydov 579(290+289), Maksym Babushok dropped third with result 576 while he shot 282 in fast runs. In slow runs he had scored result of 294.

On the last day will compete only 50m Running Target Mixed Runs Men and Men Junior. These Championships will be officially closed after the Awarding Ceremony.