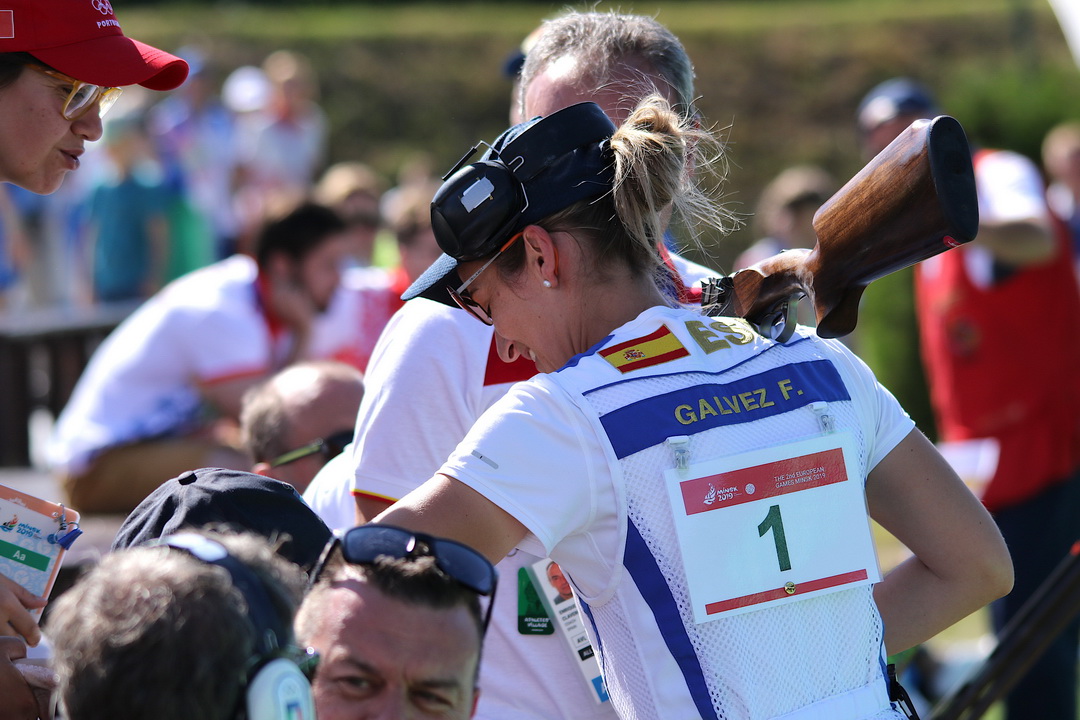 The second day of Trap competition woke up very different as mornings before.

Until today the weather has been hot and the humility very high and temperature in afternoon both sides of + 30 Celsius degrees. This morning it was only +17-18 C and it really felt chilly. In both competitions there were only one quota to win.

After the qualification the ranking was following: Fatima Galvez (ESP) was on top with result 114, Italian Silvana Stanco (ITA) only one target less (113), Marika Salmi (FIN) managed well and was third qualified (112), Jessica Rossi (ITA) 110 and on the fifth position Satu Mäkelä-Nummela (109). The last qualified to the finals was Slovakian Zuzana Rehak-Stefecekova (107). There were three athletes who have not yet a quota; Spanish Galvez and both Finns – Salmi and Mäkelä-Nummela among the finalists. Nice and exciting situation!

The spirit of the game was clear: best of those three will win the quota!

It was a very hard and tight competition. There were three different athletes on top place during the match. Stanco Silvana and Fatima Galvez kept top position most of the time, but Salmi was leading after 15th shot.

Finally she was the unlucky by missing twice when Galvez missed only once. The rest is history – Galvez continued to podium and Salmi was fourth.

Italy took a double victory when Stanco hit 46 targets from 50 and Jessica Rossi passed Salmi and Galvez. Her silver result was 44/50. Galvez hit 34/50 and won bronze and quota place.

- It was a surprising day. The results were quite low at qualification. I didn’t know the situation in Final; I shot as well as I could. For me this was a great experience to among five European’s best athletes. Probably Fatima remembered my Tuscon victory and Fatima was second and now she paid back, thought Salmi with smile on her lips.

David Kostelecky for gold and quota

The best of the Trap Men final was Czech David Kostelecky who made a brilliant shooting. He won the gold medal and also at the same time quota place to Tokyo. He was in the qualification third when is team mate Jiri Liptak was best with result 123. But in finals the order was not the same when Kostelecky won and Liptak was finally fourth with result 28. Kostelecky’s victory result was 44 and it is a new European Games record. Italian Valerio Grazini shot also an excellent competition and lost gold only with two targets.

- It was a stuff competition and I was not so sure what will happen will I did not shoot well in last two finals. Feeling is now fantastic, I really did not wait anything, but I managed well, summed up the winner shortly after the final.

Aaron Heading from Great Britain was third with result 34. The athletes who had already the quota place in Trap Men were Matthew Coward-Holley (GBR), Alberto Fernandez (ESP), Andreas Makri (CYP) and Erik Varga (SVK) – anyone of those athletes did not reached into the finals, so the only quota went with the winner of the Finals. Congratulations and happy journey to Tokyo-2020, David!

The Games will continue with Trap Mixed Team competition tomorrow.