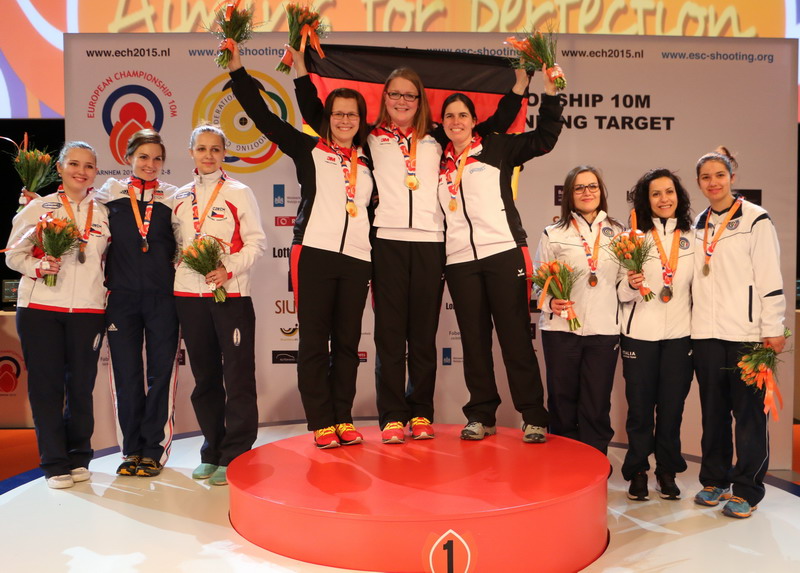 Germany has always been a strong rifle shooting country, and so it was also today. All the German ladies were among the nine best athletes in the Qualification, but, as we well know, only eight best will get place in finals. Unfortunately Barbara Engleder was the unlucky one. She lost her final place to the team mate, rookie in European Championships, Selina Gschwandtner. Of course Engleder couldn’t know that the athlete, who dropped her out with the difference of 0.2 point, was soon to become a new European Champion.

Selina Gschwandtner showed a strong performance. After the first shot series she took the lead and kept it during all the competition. Her winning result was 206.8.

- This was my first time as a senior in the European Championships and also my first final. I love this feeling and this is great to win this competition and I’m so happy. It’s crazy to compete in the finals but I didn’t know that I was shooting so well, - explained Selina.

Her behavior was very strong during the whole final, and it looked like she owned the arena.

- It’s so crazy feeling. In the beginning I felt okay but going to the end it changed crazy. I was nervous but it was just crazy feeling. Tonight we will celebrate someway with other team while we are happy also to win the gold in team competition too, - told Gshwandtner.

Gshwandtner won the gold with the difference of 2.5 points before Italian Sabrina Sena. Her result was 204.3. The bronze travelled to German Laura Kreutzer. Two rookies in senior’s finals from Germany and the both stood on the podium.

Germany won gold with the difference of 2.2 points before Czech Republic. Bronze medalist team was Italy with the result of 1242.8 points.