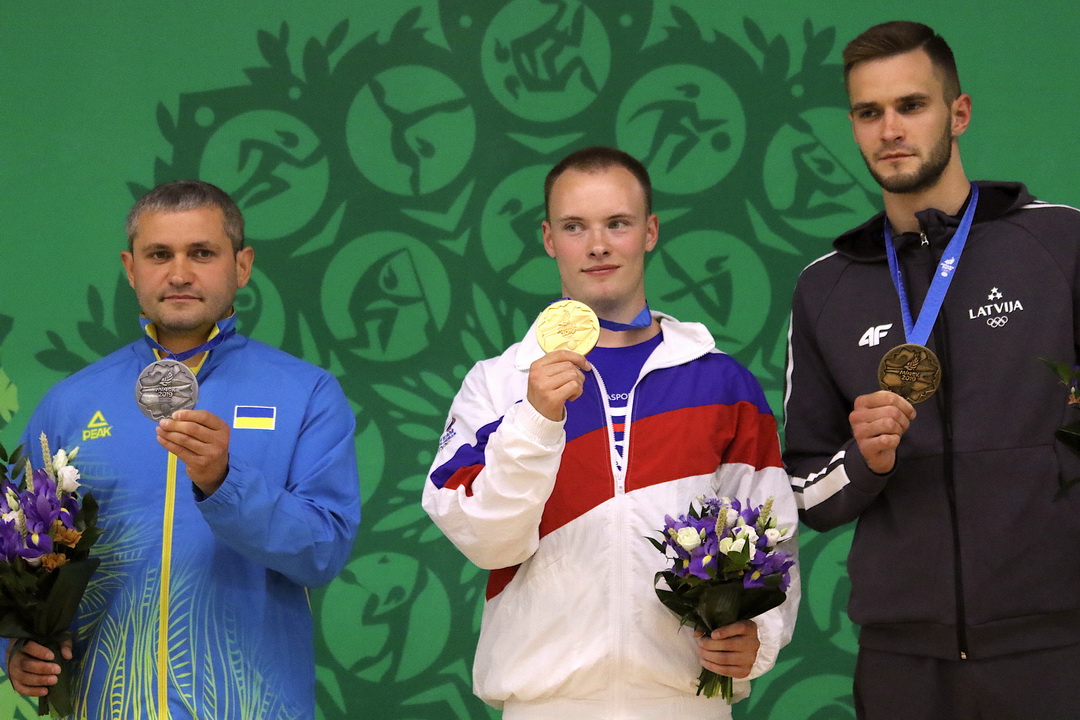 Russian Artem Chernousov look to live his best times now before Tokyo. He showed his skill with team mate Vitalina Batsarashina yesterday in 10m Air Pistol Mixed Team by winning gold. Today it was turn to climb up to the highest podium in awarding ceremony of the 10m Air Pistol Men Competition.

Artem Chernousov’s second gold medal came after small difficulties, but when he started to be himself and feel relaxed the working was sure and relaxed.

- Today it was much easier competition than yesterday while the temperature was not so high. I could even breathe. My start was even horrible. I didn’t feel myself relaxed. Slowly I started to feel my skill, my working condition and there were more inner tens and it came easier to shoot, I relaxed. The main problem in the beginning was that I did not feel my working level. I said to myself that I’ll get you guys and so I managed to do it, analyzed European Games Champion Russian Artem Chernousov. - I train a lot; the goal is now in Tokyo. I’m really strong but I can be stronger in the future and that is the goal I’m working for. This event was one of important points on the road to Tokyo.

Artem Chernousov’s victory result was 241.5 (EGR). Silver medal winner was Ukrainian Oleh Omelchuk who lost finally gold 1.8 points (239.6): Omelchuk was not sad for the silver while he won the Quota place to Tokyo. Chernousov had it already! The winner of bronze medal was Latvian Strautmanis with result 219.3.

Serbian Zorana Arunovic shined like two suns after the final of 10m Air Pistol Women. She had just won a great number of world and Olympic medalists with result of 241.2 (EGR). Most with her competed Anna Korakaki (GRE) who was also leading during the competition but she has finally to bend while Arunovic made a very strong finish to her competition.

- This was not at all easier competition than yesterday. Even more difficult! It was exciting but at the same time difficult while you have all the best on line. Europe has a high level and today there was so many Olympic or world champion medalists competing with me. I’m very happy for this gold medal. You must never give up, everything is possible, joyed the new European Games Champion.

Anna Korakaki won silver medal with result 238.9 and the winner of bronze medal was Antonetta Boneva (218.1). The Quota place for Tokyo was Klaudia Bres from Poland who was sixth while her competition mated had already quotas!