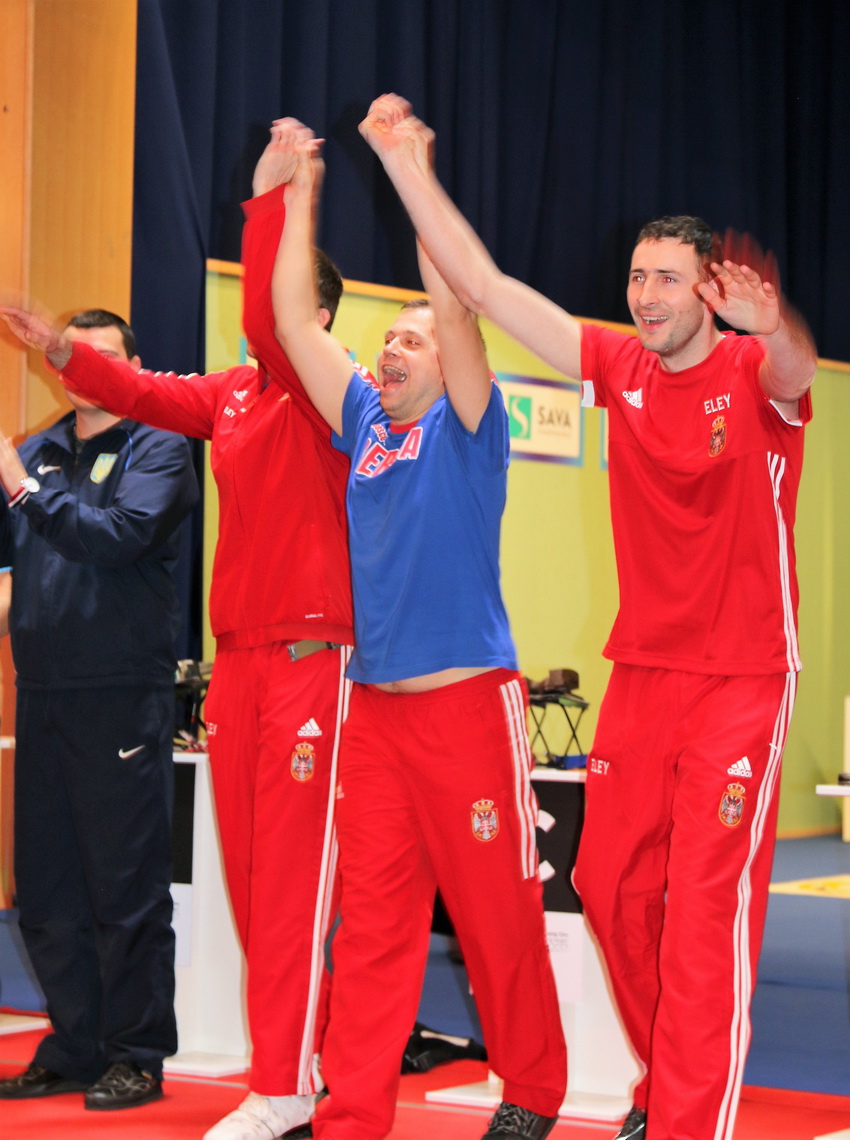 The last two competition of the third day were the new Team Test competition for Air Rifle Women and Air Pistol Men. In the bronze match of Air Rifle Team Women Test competition audience got a good drama. Croatia and Denmark had both 19 points and the winner needed to have 21 points first. Last shot and difference with 0.2 point – silver for Denmark.

In the Gold Match met Russian Federation and Serbia. Russian Team was superior and beat Serbia with the result of 21-7. The team consisted of Anastasiia Galashina, Yulia Karimova and Daria Dvovina.

The last competition was the Air Pistol Men Test Team Event. In bronze match Russian Federation beat nearly as superior as women’s team when winning Italy with the result of 21-8. In the gold match met Serbia and Ukraine. Serbia won the first points but Ukraine did excellent work by winning three next points. Serbia did not give up and won four next shots, 10-6 for Serbia. The situation of match changed from one team to another. In the situation 16-10 Ukraine won 5 next shots: 20-16 for Ukraine. Then Ukraine lost their concentration and at the same time Serbia started strong chase and managed to do it: they won three next matches. Game for Serbia and gold medals! The Serbian team consisted of Damir «The Dominator» Mikec, Dusko Petrov and Dimitrije Grgic.

«We are very happy to win the gold. Gold medal match was very tense, lead changed many times and at the end we had to come from behind in last three shots. We got additional wind in our sails after a perfect shot from Grgić and at that moment we felt that we can win. New format of the discipline is quite physically demanding and the match is full of adrenaline. Today was very hard and laborious for us because we competed in more than one discipline. But we will sleep so much better now», told Mikec having now gold.

Among the audience there were also ISSF Secretary General Franz Schreiber with Ashley O’Neal from the IOC Sport Department.

«The impression was very positive and I liked it. The team spirit is coming out greatly and the medal matches suit very well for these kinds of team events», described Schreiber his first impression of the new event.

Ms O’Neal was watching shooting sport Finals for the first time and liked the event.

«Actually this was my first event and I really enjoyed it. The audience was great and created very good atmosphere», enjoyed Ashley O’Neal.

On Saturday the Championship will have the last competition day. We have the Finals for Air Pistol Women, Air Rifle Men and Mixed Team of Air Pistol and Rifle plus Medal Matches for 10m Running Target Mixed and Mixed Teams. The Closing Ceremony starts at 18:30.