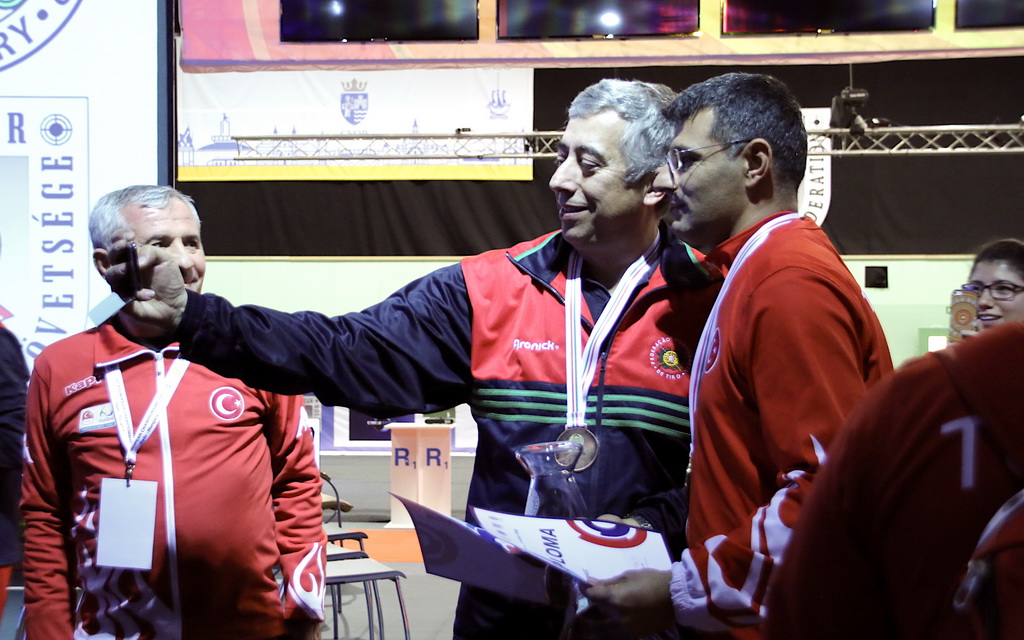 In the Air Pistol Men Turkish Yusuf Dikec made the same think than two years ago here in Györ. He won the European Championship.

I don’t know does it suit well to shooting but some way it described the situation in the 10m Air Pistol Men Final. The athletes who received the place to the finals were following: Artem Chernousov (RUS) 584, Joao Costa (POR) 584, Yusuf Dikec (TUR) 583, Samuil Donkov (BUL) 582,

Young Artem Chernousov made his despite in the Seniors competition level. In Juniors he had a lot of success and he who surely thirsty and eager to show his skills to more experienced athletes. He led with Anton Gourianov the first half of the final. But then after 18th shot ”the Turkish Tiger” Yusuf Dikec.

Step forward with excellent hits (10.8, 10.6, 10.3, 10.8). The game was over and he kept Chernousov and Joao ”King” Costa behind him. Last time when Dikec had won European Championship happened two year ago just here in Györ. Györ look to be Dikec’s favorite range.

Artem Chernousov won silver and competed hard from the gold. The Match was over during the second last shots when Chernousov had his weak moment in those two shots 9.8, 9.9. Anyway we will read from the debytant Chernousov soon, Im sure. He was quite familiar among the older athletes. The Gold medal result was 241.6 which is Equal European record. Chernousov’s silver result was 239.8 and Costa’s bronze needed 218.8 result.

In Running Target Mixed Women was triumph of Russian Anna Kostina who climbed up to the highest podium also yesterday. In today’s competition he won the gold medal with the difference of 11 points before Ukrainian Darya Rozhniatovska (362) and Kristina Hievych (UKR). Anna has shot totally about five years and Maxim Stepanov has been her personal coach. So her future looks to be in safe hands.

In the team competition Ukraine ruled and won European Championship clearly before Russian Federation and Hungary who won bronze. Superior gold result for Ukraine was 1124 and Russian silver result 1064. Hungary lost silver only with one point (1063).