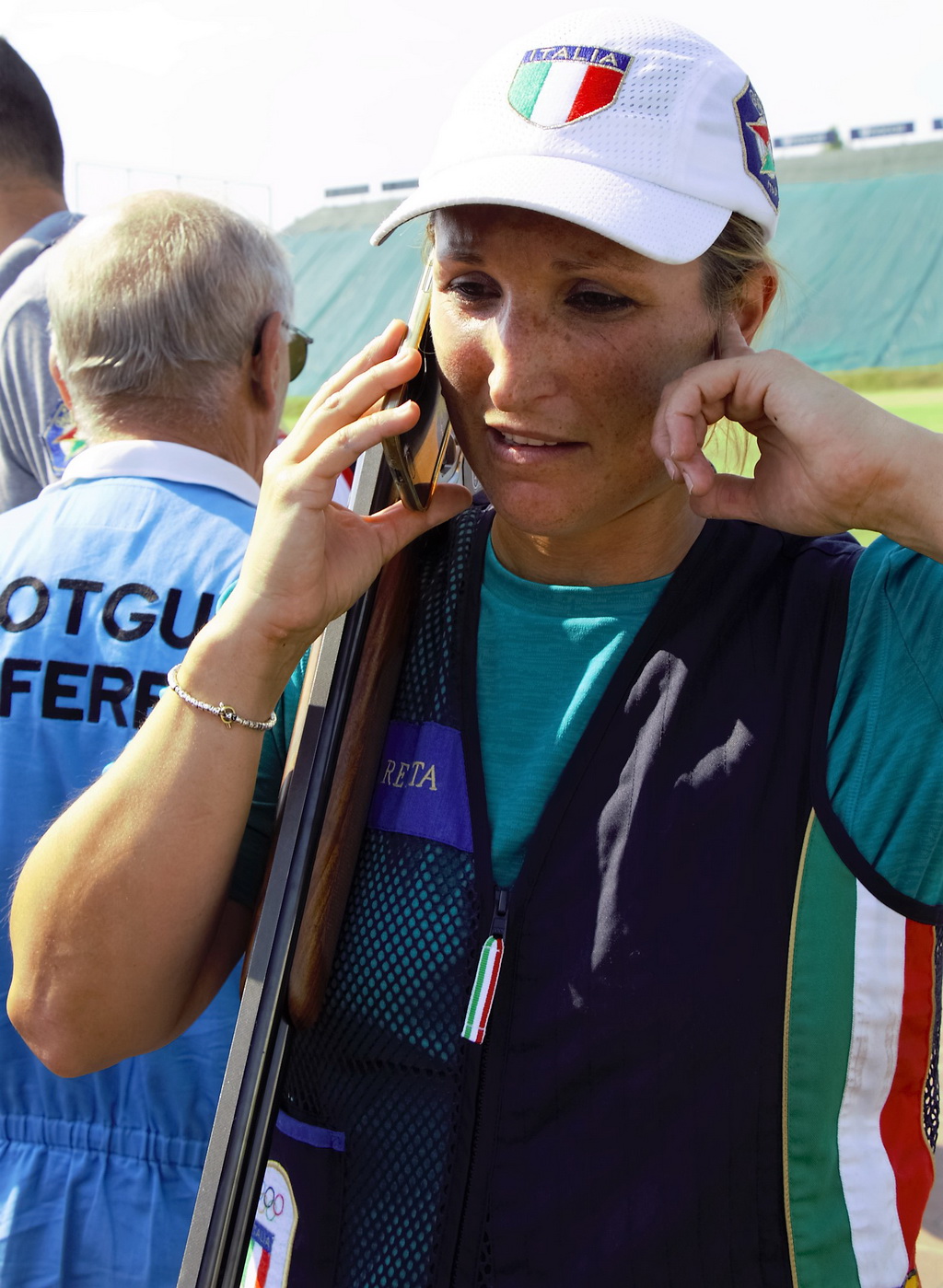 Saturday woke up a little bit misty but you could feel the heat when entering out of hotel and walking at shooting range. It will be a nice sunny and sweating day again.

On Saturday it was the turn of Skeet women and women juniors. After the qualifications you could find quite familiar names on the ranking list. On the top of ranking list there was Italian Chiara Caineiro.

“Naturally, she is the best and she take the gold today, absolutely”, said one of my Italian journalist colleague Laura Almici in the Press Centre. Caineiro hit all 75 clays. Only one clay behind Cainero was British Elena Allen (74), Konstantia Nikolaou from Cyprus hit 73. Nadezda Konovalova (RUS) and Vanessa Hauff (GER) both hit 72 clays. The last qualified athlete to finals was Slovakian Danka Bartekova with result 71.

The Skeet women finals were just like my colleague explained before the finals. I even have been able to write this article before and add only the scores. Chiara Caineiro is absolutely one of the best shotgun shooters in the world so sure was her shooting. Only two misses during the whole competition qualifications included. It looked easy from spectators. Yes, Chiara Caineiro won the Championship but was it so easy this time.

“The whole competition was very hard for me because of it was so hot. I have to be very focus all the time and when in the other ranges there was also shooting going on it made for me hard to shoot. Probably it is first time when I’m shooting in this kind of situation. Anyway I train also for this kind of finals but it means extra focus, explained Chiara Cainiero just after the finals. This is a good training for me for Rio. In Rio I’ll do my best. This was first time for me that I received this kind of result. Let’s have a look shall I be on podium”, sighed the Champion in a very humble way.

Konstantia Nikolaou started well, but then in the fourth shot she missed. After that she missed in 8th, 10th and in the last shot. Caineiro instead missed only once in the 12th shot! Caineiro hit nearly 100% she missed once in semi-finals and once in gold match. She is the real Champion.

German Vanessa Hauff won bronze after shoot off with result 13 and in shoot off 5-3. Fourth was Russian Nadezda Konovalova.

Cyprus sailed to the gold

The Skeet Women Team competition was a triumph of Cyprus. They beat Italy with the difference of 4 clays (209). From the lower places there were tighter while the silver medal was won with one clay difference and bronze medal scores were equal. The winner of silver was hosting country Italy with result 205. Slovakia won finally bronze medal before Great Britain, the both had 204, but it had to be checked by comparing rounds results. Actually both team scored in last rounds 67 but in the second round results the result of the Slovakian team was one clay better (69) than the British (68) had.