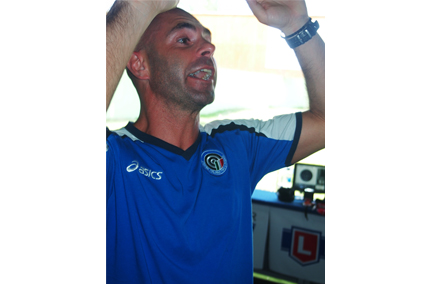 Saturday was a day of Italian triumphs: as they say, the result was benissimo! In the morning the Italian Dario Di Martino won 50m Pistol Men Junior, then Italy was the best in the team competition and finally Giuseppe Giordano was crowned as ”the King of 50m Pistol”.

The 50m Pistol Junior event illustrated well that one should compete with 100% efforts to the end. The competition is over when last shot is made! This could be seen when juniors were competing at the Final. The last shots let the Italian Dario Di Martino win, with the 0,1 point difference from the Belarusian Artisom Lukyanavets. Di Martiono’s final result was 187, 8 points.

- The difference was so tiny before the last shot; I was only trying to concentrate and do what I could, - the new European Champion Di Martino said. Kamil Gersten from Poland became the winner of the bronze medal.

Poland became the winner of the team gold with the score of 1633 points. The team consisted of Kamil Gersten, Grezegorz Dlugosz and Jerzy Pietrzak. Belarus (1621) became the winner of silver medal with 1 point difference from their neighbour country, the Russian Federation (1620).

In individual men event Guiseppe Giordano was superior at the Finals. He edged Joao Costa by 6,4 points! Denis Koulakov from the Russian Federation ranked third. Giordano’s result at the Finals was 195,7 points. The silver medallist Costa received 189,3 points.

When Joao Costa came to congratulate Giordano, the latter jumped to Costa’s lap. Then there were two dances around the firing point.

-        I’m so happy, so happy… I can’t describe this feeling. Happy, happy , can you imagine? I´m a European Champion! We have an excellent team, excellent coaches. We’ve been training for this for so long. It was a hard journey, but now I´m a Champion. I was trained by Zeljko Todorovic for quite a long time, he taught me the basics and now Matthias Hahn is continuing my training. This is so wonderful – benissimo, benissimo! - Giuseppe Giordano said in the fertile and vibrant Italian style, surrounded by his teammates.

In the team competition Italy edged Turkey (1665) by 6 points. Italy’s winning result was 1671 points; the Russian Federation won the bronze medal with the result of 1655 points. The Italian team consisted of Giuseppe Giordano, Andrea Amore and Fransesco Bruno.

You can now follow and watch the Finals live on Internet www.ustream.tv/channel/epso2013