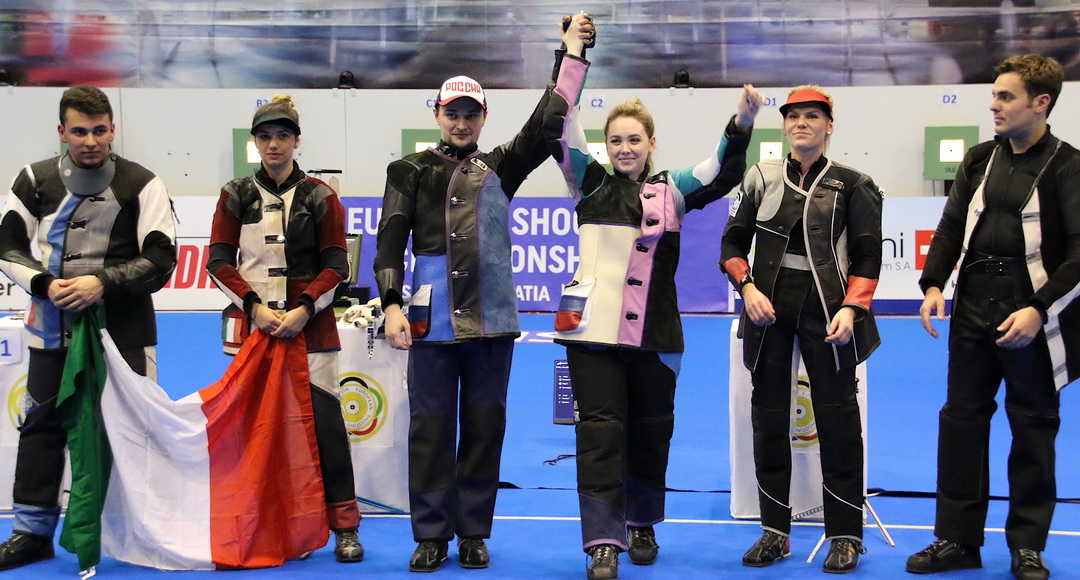 Italy 2 was the best team in 10m Air Rifle Mixed Team Qualification yesterday. The team consisted of Petra Zublasing and Marco Suppini. Their result was 840.5 which is a new European Qualification Record.

They beat Serbia 1 Team with the difference of 3.7 points. Third was German Team 2 only 0.2 points behind Serbian Team. Russian Team 1 was fourth (834.9) and the last who shot into the final was Team Sweden with result 834.6.

These five teams competed from the title of European Championship. That was yesterday.

In the final of today it was quite clear that it will be the duel between Russian team and Italian team. When entering to the final range Anastasiia Galashina and Vladimir Maslennikov looked so strong minded that we could clearly read that today´s result will be something else than fourth place like in yesterdays qualification.

These both two teams changed the leading place time by time. Italy was leading last time when 38th shot had been done. The difference was only 0.2 . After that started the triumph of Russian Team 1. They added the difference slowly but sure. Italy could not defense and Russian team passed them. The Russian victory result was 498.7 was finally 1.9 points.

German team competed well and climbed to the bronze podium. Fourth was Serbia 1 and Sweden fifth.

"It was a little bit hard final but we managed to win. I understood just in the end that we have won this final. Vladimir was perhaps on line better", explained Anastasiia Galastina after the final.