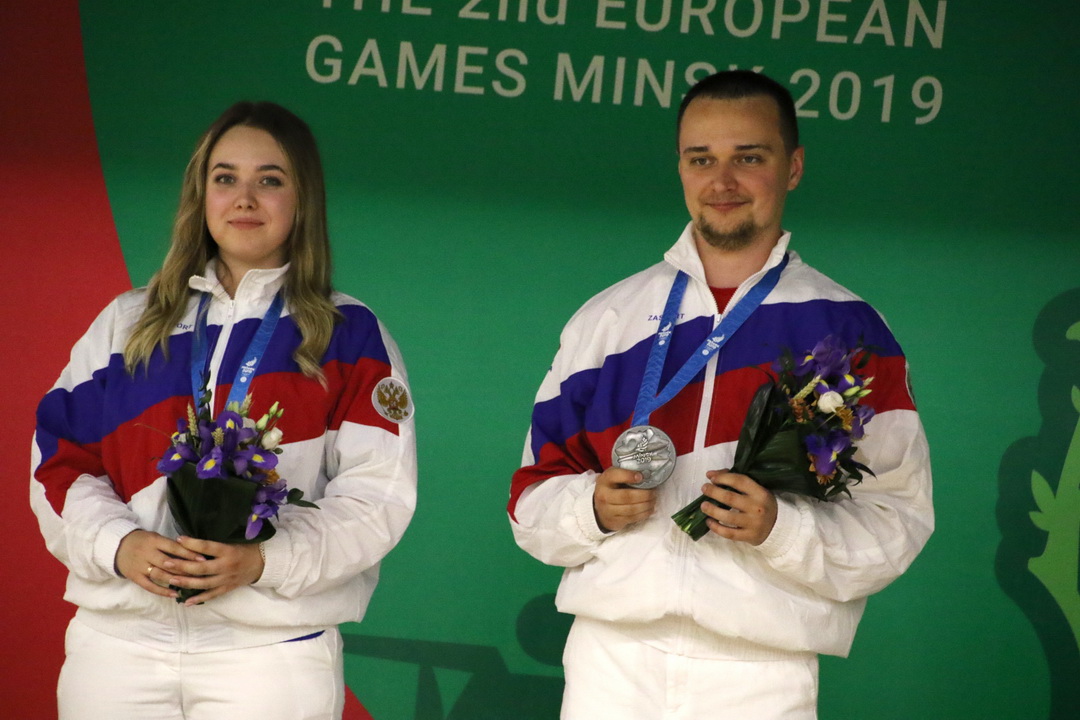 The first real competition day was a real Russian day.

In the first final Russian Federation won gold and in rifle the athletes made it even better. The both teams climbed up to the podium. The named order was the same as in their names: Russian Team 1 won gold and Russian Team 2 was on the silver podium. In the Qualification the order was different. Russian Team 2 won the qualification with new European Game Record 629.9. Second was Czech Team 1 (627.1), but Russian team 1 was only fifth with result 625.6.

In bronze match Czech team competed against Norway 1. Czech ruled the match all the time, but Czech team made good hits too. The difference of the results was very small. Once both team shot even same result 20.9. Anyway Czech team won bronze with result 17-11.

The gold match was duel of two Russian teams. When teams had shot five rounds (one shot per athletes), team 1 was leading 8-2 and their last result was nice 21.5.

It looked clear that Karimova and Kamensky will take a clear victory but team 2 started slowly to rise and wake up. They were leading even 12-4 with Kamensky’s execellent 10.9 hit. The difference of the team results were from 0.1 to 0.6.

Finally the Russian team 1 won the match with result 16-12.

In the lead of Trap women is a familiar name; Fatima Galvez from Spain who hit 70 targets. On the second place is Italian Silvana Stanco (69) and Stanco’s team mate Jessica Rossi is challenging with 68 results. Zuzana Rehak Stefecekova (SVK) hit 67 targets. With the same result as Rehak Stefecekova made also Alessandra Perilli (SMR) and Finnish Satu Mäkelä-Nummela. The competition will continue tomorrow.

The Trap results have not yet been very high generally speaking. The clear reason is burning heat and humidity which makes the difficulties with fluid balance.