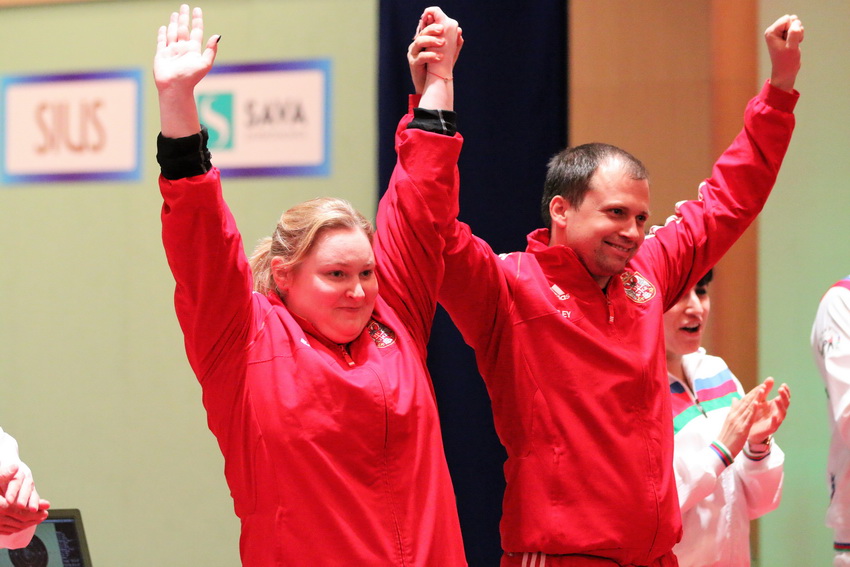 The ESC created a new event which is Mixed Team Air Pistol and Mixed Team Air Rifle. Both matches have now been official events of the European Champion. The teams consist of female and male athletes. In the finals athletes shoot single shots and the team whose results counted together wins a point. The winner team is that team who reaches first five points.

There were 26 teams in the Mixed Team Air Pistol event. From the Qualification to the first semi-finals had reached Serbia, Azerbaijan, Ukraine and Spain and to the second semi-finals competed Russia, Bulgaria, Germany and France. From The first Semi-finals Serbian Team (Zorana Arunovic and Damir Mikec) managed to take place to the gold match and to the bronze match place took Azerbaijan. From the second Semi-finals Russian Federation continued to gold match and Bulgaria to the bronze match.

Azerbaijan was surprisingly superior and won the bronze match wit result 5-1. In the gold match Serbia was leading already 3-1 one when Russian Team started their pursuit. They won two matches and the situation was 3-3. Then Serbia won one but Russian team did not give up and the situation was even before last shot.

In bronze match Germany met France and they were superior by winning France 5-0. In gold match Russian Federation competed against Serbia. Serbian Air Rifle team made the as some minutes before their Pistol mates – they also won the gold and European Championship. The result for Serbia was 5-2.

«It was an emotional moment us while this was the third time on road that we won this competition. This is also very important for us also while we didn’t have so good result since Olympic Games. This is really fun for audience and good for shooting but also for athletes. It is very hard competition for athlete while there is high level pressure for athletes. We wish that trough this kind event shooting sport would became more popular», wished Andrea Arsovic and Milutin Stefanovic.

In the afternoon it was also organised Mixed Teams Running Target. In gold medal match Ukraine beat Germany 6:2. Silver goes to team Germany and in match for bronze Hungary beat Finland 6:3 and won the medal.

In the Сlosing Сeremony it was hear Slovenian national music performances. The ESC flag was handed to the next hosting country Azerbaijan, where the next European Championships will be organised this year.

In the Closing speech ESC Secretary General Alexander Ratner thanked the Organising Committee who full filled all the promises, even the weather conditions. Ratner also thanked the athletes who have been in the main role and wished good luck to Baku

«I wish we see you all in Baku, hvala Maribor», he finished his speech!