Sunday is full of hope 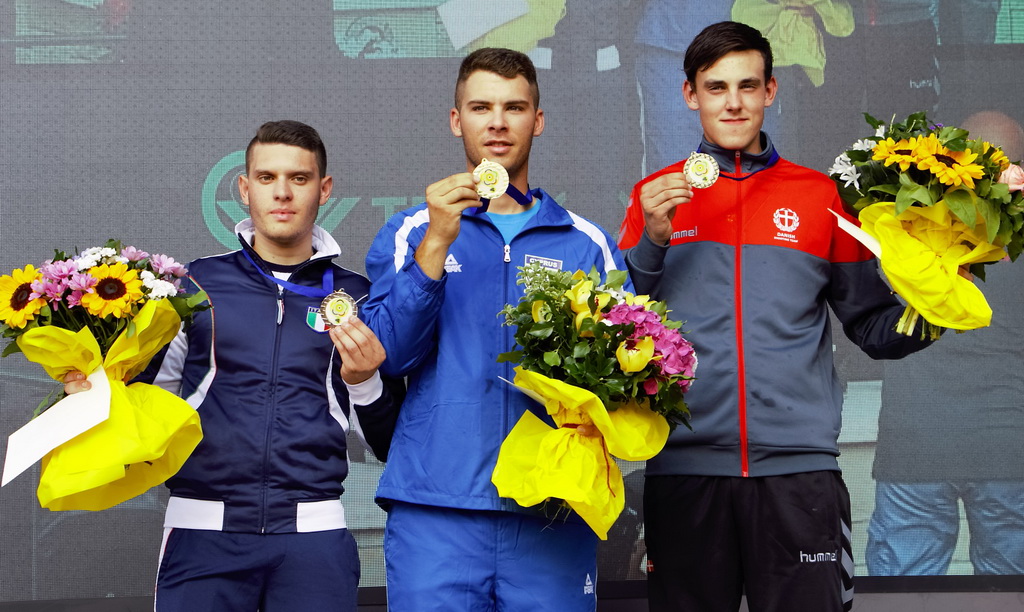 Sunday was the day of skeet. The weather was probably the hottest during the Championship and that´s why it was more challenging also for the athletes. The question was how to keep the body active and sharp. Anyway the qualifications showed that athletes know what to do and how be in good shape.

The Skeet Men Qualification was one of the tightest what I have seen. Two athletes hit all 125 clays and the result is equal world record! Those two were German Ralf Bucheim and Italian Riccardo Felippelli, who made the full score (125). Luigi Lodde (ITA) shot also excellently, only one miss and result 124. The two next direct places went to Tomas Nydrle (CZE) and Jan Sychra (CZE) with result 123. From the last place for semi-final it was needed again shoot of between six athletes (Kuntschik (AUT), Laitinen (FIN), Delaunay (FRA), Terras (FRA), Korte (GER), Rosetti (ITA) who all hit 122. The lucky one was Sven Korte (GER) who finally beat Finn Timo Laitinen with result 16-15.

…and no less impressive Italian team!

The team competition was top level competition. It was the triumph of team Italy who shot the result of 371 which is a new World Record! Wow, what a start for the competition skeet men. The Italian team consisted of Riccardo Filippelli (125), Luigi Lodde(124) and Gabriele Rosetti (122). Their won was superior! The winner of silver medal was Czech Republic who lost the gold with the difference of 4 clays. Germany won bronze medal.

In the semi-final Italian Riccardo Felippelli shot all 16 targets, the same result achieved German Korte who looked to have his shooting into good shape. These two continued to the gold match. From the other gold place it was needed a shoot off between Tomas Nyrdle (CZE), Ralf Buchheim (GER) and Jan Synchra (CZE). Unfortunately Jan Sychra missed the second clay and was dropped out from the medal matches.

So in the bronze match met Nydrle (CZE) and Bucheim (GER). Nydrle started nervously and missed the first clay and fourth instead of Buchheim´s one. Bucheim lead 3-2. After 8 shot the situation was 6-4 for Bucheim. Even thou that Nydrle shot the last 8 clay clearly down, it didn’t help him while Bucheim missed only once. Bucheim took the bronze.

In gold medal Italian Ricardo Filippelli did not give any chance for Sven Korte from German. Felippeli hit all the 15 clays. Korte missed once but it was one too much. The Italian made a perfect day.

“Today went as I had planned. Honestly, a little bit better. I have also luck with so that I could make such a result. We have to continue still a lot, my target is in next Olympics 2020 in Tokyo, I’m not participating to Rio as athlete. I must train better and be in best shape in correct place. Anyway this was a marvellous day for me”, enjoyed Riccardo Filippelli after the finals.

The best Men Junior in qualification was Sotris Antoniou from Cyprus who shot result 122. His team mate Nicolas Vasiliou was the second with result of 121. The same result achieved also Czech Jan Zamecnik. Fourth was Emil Kjelgaard Petersen (120) from Denmark. The last direct place to the semi-final took Finn Timi Vallioniemi (119). From the last place it was needed a shoot-off with six athletes (Ahokas (FIN), Korcak (CZE), Meier (GER), Karlsen (DEN), Krcmar (SVK) and Palmucci (ITA)). The best of shoot-off was after 12 clays finally Valerio Palmucci, who won Finnish Aleksi Ahokas with result 12-11.

It was needed a shoot-off for gold match while there was three athlete with same score 15. From shoot-off finally to the gold match achieved the place Nicolas Vasilou (CYP) and Valerio Palmucci. A Finn TImi Valioniemi dropped out from the bronze match.

In gold match both athletes started nervously. After fourth clay the match was tie 2-2. But after that situation Nicolas Vasiliou shot like in dreams – perfectly and did not give any chance for Valerio Palmucci from Italy. Vasiliou hit all the last clays when Palmucci missed twice. Gold sailed to Cyprus.

“The competition was quite hard, but I have been trained and concentrated for this 4 hour a day for two weeks. I’m happy while I’ve managed to do my job. I wish I could continue as successful as today in the future championships. I want to be an Olympic Champion, perhaps in 2020”, told the new Skeet Men Junior Champion.

In Skeet Men Junior Team competition the European Championship was won by the team of Cyprus with result of 359. The team consisted of Sotiris Antoniou (122), Nicolas Vasilou (121) and Stefanos Nikolaidis (116). Finland continued their series of team medal, now the result 354 reached for silver medal. The winner of bronze medal was Czech Republic with same result as Finland (354) but Finland had better last series result (FIN 72 - CZE 71).