Tears before and after the finals 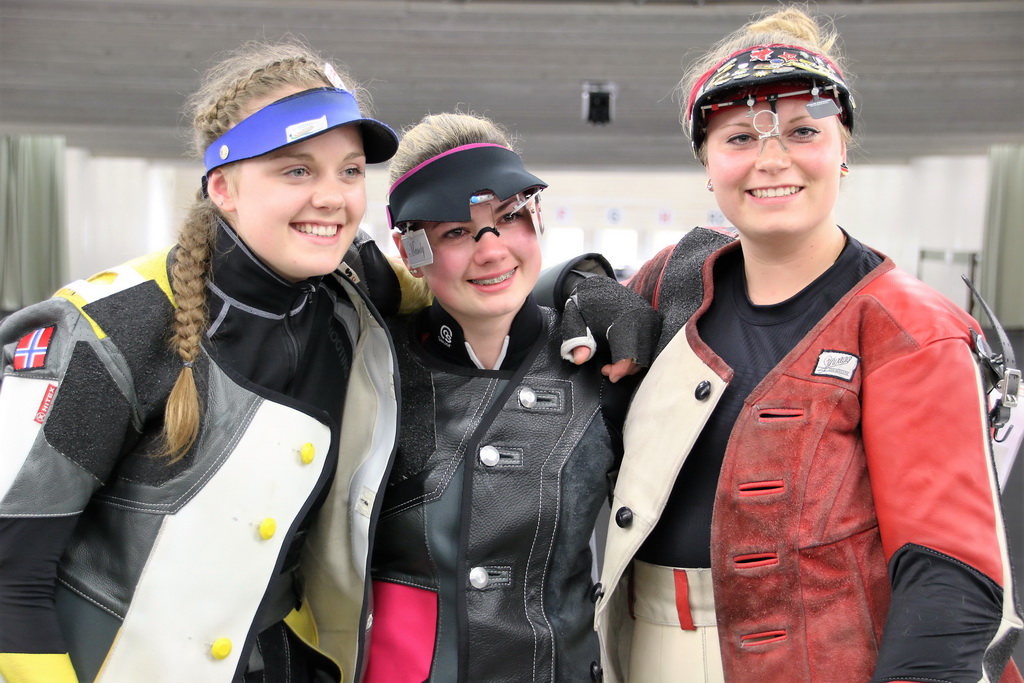 The last competition at the European Championship was 50m Rifle 3 positions. The 3 positions are also called King or Queen Event of the Rifle shooting. The hardest may be the 300m meter competitions. But yesterday women junior competed in 50m Rifle. As I wrote in the earlier article, the weather wasn´t the best, but it is one of the most interesting issues in a shooting sport that you have to concentrate, get along with the wind and shoot well and sharp. And, of course, when shooting 3 positions, you have to handle all the three: kneeling, prone and standing.

After the qualification on top place was Seonaid McIntosh from Great Britain. She showed the result of 581. Two points behind her was Mandy Mulder from Netherlands. The six other who qualified to finals were Jenny Stene (NOR), Regine Nesheim (NOR), Tatiana Kharkova (RUS), Anna-Lena Kinateder (GER), Jenny Vatne (NOR) and Sabine Hoessl.

The final was just starting, and Mandy Mulder was taking her kneeling position for making sighting shots, and her hand sling broke suddenly. Tears were falling down on her pretty face. Can´t be true. Oh my…. Fortunately she quickly got help from other shooters nearby and continued concentrating into the finals. Dramatic start!

The start did not promise anything good. Also her first kneeling series was only 48.5, while German Anna-Lena Kinateder shot 52.1, and two Norwegians breathed behind her. Slowly Mulder started to find the idea, and after kneeling position she had received a result of 150.5 points. She was on the 5th place and two points behind Regine Nesheim.

Time to chance the position from kneeling to prone has come. After the first prone 5 shots series Mulder arose to the 3rd place, but the difference between the top positions was now 2.2 points. Nesheim made amazing work: in the second series she shot 52.1 points. Vatne succeed also well (51.8) and Mulder third, and the difference to the leading place 3.4 points.

It looked like that this will be triumph of Norway, while after the prone there were two Norwegians on top: Nesheim 307.4 and Vatne 306.1. Mulder was third (304.4) and McIntosh fourth only 0.3 points behind Mulder.

The last position was standing, which is also a position, where the athletes turn the turbo to the maximum. It’s the last opportunity to win – or lose – the game. After the first standing series Jenny Vatne takes the lead with result 354.1, Mulder second 353.8 – but now only 0.3 behind Vatne. Nesheim sank down to sixth place by shooting 43.5 point only.

In the second series Mulder shot excellent 50.8 and took the top-place with result 404.6. Now the game has been turned around while Vatne is 2.2 behind Mulder and Kinatender has arisen to the 3rd place. And then it´s for the single shots.

Mulders triumph continues. We can see that she has decided to win. She does not give any possibilities to the other athletes even she makes one 8.9 hit. Mulder turns her difficulties for strength and win the European Championship with result of 452.3. The difference to silver medallist Jenny Vatne is three points. The winner of bronze medal is Anna-Lena Kinateder.

Tears are falling on Mandy Mulder´s face, but now for happiness! It was very emotional moment which Mandy will remember for long time.

“Fortunately I got sling from somebody. I was someway safe and I thought that I do not have anything to lose. And I really did it. I don´t know how to describe my feelings, I’m so happy, happy, happy!”.

That was a dramatic and emotional end for these championships. Mandy was still in “positive shock” when she entered to the podium. Now the heaven also cried with her. We can say that all angels cried with Mandy – for happiness.

Estonia made a good championship

The Closing speech was spoken by the ESC Vice-President Kerstin Bodin. She mentioned that at the General Assembly of the European Shooting Confederation in 2013, the member federations were requested to appoint the host federation of this Championship. There were no applicants. Luckily, the Presidium received the application from the Estonian Shooting Sport Federation later that year.

“On behalf of the ESC Presidium, I would like to extend our warmest thanks and appreciation to the Estonian Shooting Sport Federation and to all the volunteers for their hard work. We realize that it has been a challenge for you to create a venue worthy of hosting a European Championship. You have prepared the shooting range under difficult circumstances and with potential for further improvements. We would be honoured to come back in the future. It has been a great pleasure working with your excellent team. You have done everything for us with a smile and much patience. Together, we have solved the problems one at a time. Except for today’s weather. We were not particularly successful with that one. Thank you – athletes and officials from all over Europe. I wish you all a safe trip back home and a warm welcome to the ECHs in Maribor SLO and Baku AZE next year. The flag of the European Shooting Confederation will now be lowered, and handed over to Unione Italiana di Tiro a Segno, organizer of the Final of the European Youth League in Bologna in October. I hereby declare the European Championship Junior in Tallinn, Estonia 2016 closed, and kindly ask you to rise for the official hymn of the European Shooting Confederation”.