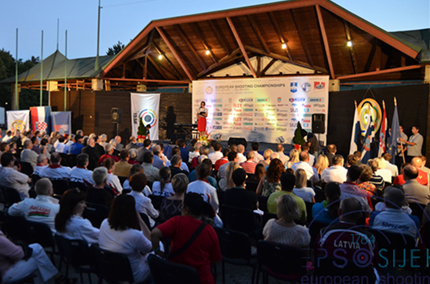 The Opening Ceremony was held on the 22nd of July at the Pampas Shooting Center in Osijek. The ceremony started with the entry of participating countries. There are totally 581 athletes from 39 European countries who will be competing for the title of European Champion in 23 events.

Mr. Ivan Vrkić thanked the European Shooting Confederation for having entrusted the organization of the Championship to Osijek once again. Mr. Zlatko Mateša pointed out also that this Championship is one of the biggest sports events in Croatia this year.

The ESC was represented by the Vice-President Kerstin Bodin. In her greeting speech she expressed the appreciation and gratitude of the ESC President and ESC Presidium to Organising Committee, the Croatian Shooting Federation and the city of Osijek for the willingness to undertake the responsibility for this Championship with very short notice. She also expressed special gratitude to the City of Osijek, which has offered great support and played a very important role in the successful organization of the Championship.

The Vice-President Kerstin Bodin also reminded the audience that it was only four years ago when the 225-year anniversary of the shooting sport in Croatia was celebrated. She also mentioned that the Croatian Shooting Federation and the Organising Committee of Osijek have long-term experience as excellent organisers of major shooting sport championships and expressed confidence that they, once again, will do their utmost to arrange a successful event.

- We are all looking forward to high quality competition and exciting Finals in a spirit of friendship and fair play, - she said and declared the European Championship opened.