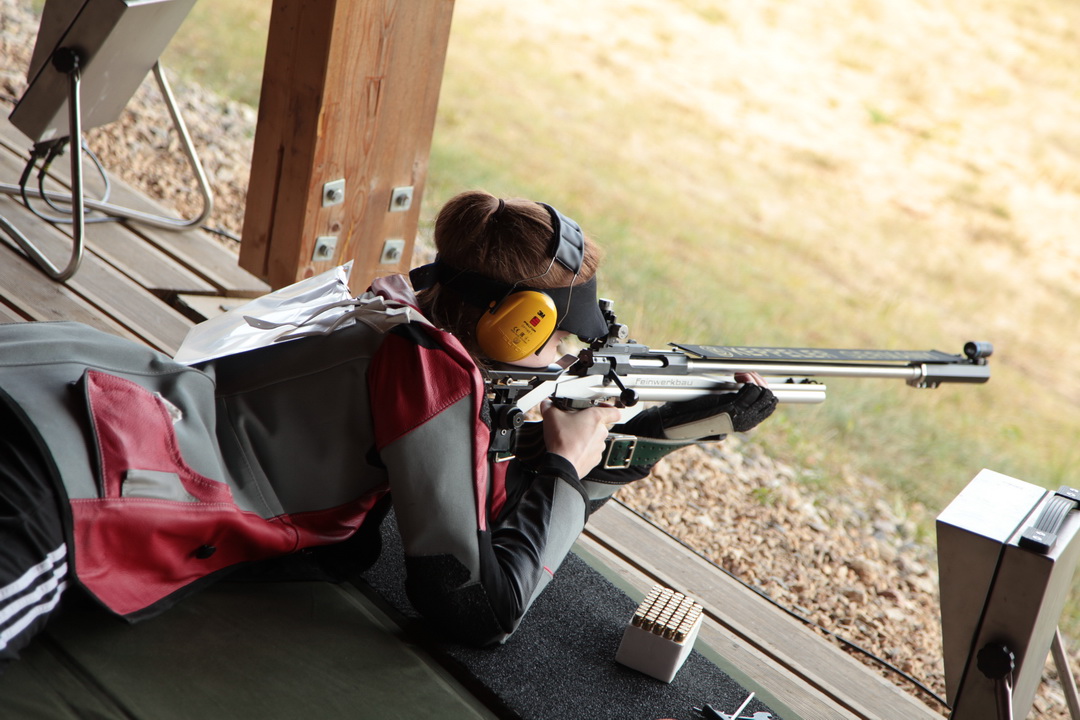 German Veronique Münster turned the victory for herself with the minimum difference before French Lisandra Storai. Both athletes shot the same result 594! The difference was the number of inner tens and in that competition, Münster was better in inner tens with result 30-25. Münster was 6th in the elimination yesterday. Her result in elimination was 588. So she made a good match today!

“Shooting was good, the weather was a little bit challenging, when the light changed quite a lot – sun – clouds -sun and finally also the wind! I some way managed to handle it. This was my first international victory, I have been shooting big bore now three years and in the national team one year. I’m very happy for the victory”, told rookie Münster.

In the team competition, which was made in the elimination yesterday, the winner was Germany (1757), second Sweden (1757) and third Switzerland (1752). Germany won the team competition also with the number of inner tens: Germany had 78 inner tens – Sweden 69! The German team consisted of Eva Rösken (590), Veronique Müller (588) and Lisa Müller (579).

The rifle 300m prone was the last rifle competition in Lapua European Cup 300m in Estonia. After yesterday elimination 20 best received their place to the Sunday’s competition. The winner of the competition on Sunday was Per Sandberg from Sweden with result of 596. Silver medal winner was Daniel Romanczyk 595 from Poland and the bronze medal winner Swiss Gillet Dufaux 594.

“Wow, I’m very satisfied of my shooting. The shooting looked quite easy but it was quite difficult because of the changing light but also the wind was quite challenging. Most of the time it blew from the left and I couldn’t see every time when the wind was coming. That’s why it was challenging. I tried to shoot make tens from the left and tried to find a calm moment. That was my plan today. This looks good when thinking for Korea World Championship. This was good match and good test for me. I think that I can make couple of points more”, explained Sandberg.

Ruslan Lunev made it again

The 25m Standard Pistol Men was the only event on Sunday. In the competition there was a familiar winner when Ruslan Lunev made a high level result. Lunev shot 580; his series were following: 150 sec - 195, 20 sec - 191 and 10 sec – 194. Lunev’s victory was superior while he beat silver medallist French Franck Kiefer with 16 points. Kiefer won silver German Torben Engel with the better number or inner tens. Kiefer had 13 and Engel 8.

“This was my personal record in Standard Pistol. I’m absolutely satisfied and happy for this journey and competition. This proved me that I’m ready for the World Championship”, rejoiced Azerbaijan Ruslan Lunev.

The Lapua European Cup 25-300m Estonia proved that the European athletes have prepared well and they are ready for the ISSF World Championship which takes place in Changwon Korea on the 31st August- 15 September. Good luck and perfect shots!