EUROPEAN JUNIORS ARE UNBEATABLE IN GRANADA 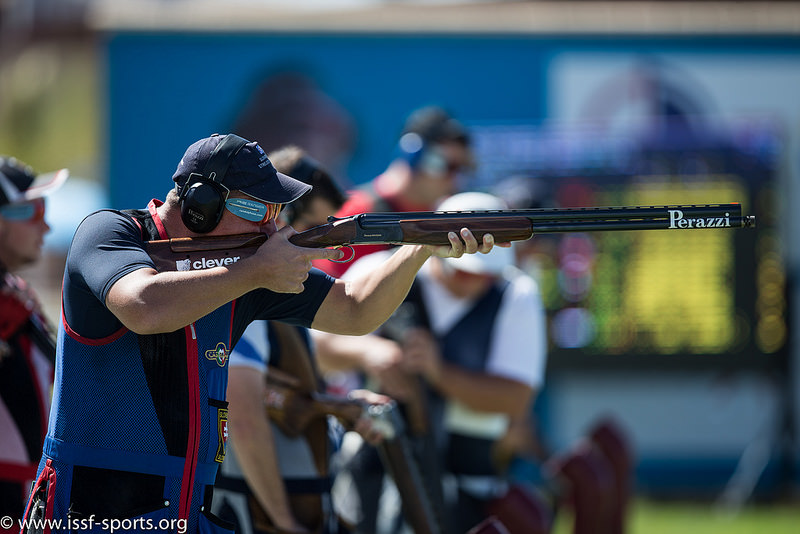 There were three sets of medals disputed by Juniors in Olympic events at the 51st ISSF World Championship during the third and the fourth days of competitions and all three gold awards were won by the young European shooters.

In 25m Pistol Women Junior Mathilde Lamolle from France beat Lin Yuemei from China in the Gold Match with a score 7-1. The bronze medal in this event went to Lidia Nencheva from Bulgaria who was better in the Medal Match than Jeong Yeonse from Korea (7-5). There were also two athletes from Poland in the Final. Agata Nowak finished on the 6th place and Joanna Tomala – on the eighth place.

In 10m Air Pistol Men Junior the last shot of Alexander Kindig from Germany brought him the victory over Boram Choe from Korea. Lauris Strautmanis from Latvia won the bronze medal. His countryman Emils Vasermanis was the fourth, Alexander Todorov from Bulgaria – the fifth and Carl Sandberg from Sweden – the sixth.

Jan O'Sullivan from Ireland beat Jack Wallace from Australia in the Gold Match of the Trap Men Junior. Nathan Hales and Jack Douglas Wilkinson, both from Great Britain, disputed the bronze medal which went to Hales.

Only one gold medal was won in the Olympic events by senior European shooters during two days of competitions but many Quota Places for the Games of the XXXI Olympiad in Rio-de-Janeiro prove the high potential of athletes from different European countries.

Erik Varga (on the photo) from Slovakia became the new World Champion in Trap Men. In the Gold Match he was better than Edward Ling from Great Britain. Both obtained the Olympic Quota Places. The bronze medal and the Quota Place went to the 44-years old Giovanni Pellielo from Italy who has already taken part in six previous Olympic Games. There were two more European shooters in the Final. Jiri Liptak from the Czech Republic finished on the fourth place and Lyndon Sosa from Luxembourg – on the sixth place.

It was hard to beat 3-times Olympic Champion Jin Jongoh from Korea in 10m Air Pistol Men but Vladimir Gontcharov from Russia and Yusuf Dikec from Turkey were very close to the success. Dikec in the end won the silver medal while Gontcharov – the bronze. Both of them obtained Olympic Quota Places. Juraj Tuzinsky from Slovakia finished on the 7th place, Samuil Donkov from Bulgaria – on the 8th. In Team Classification Russia was third, after the winning trio from China and Korea.

In 50m Rifle Prone Men the victory went to 52-year old Warren Potent from Australia, but next four positions that guaranteed the Olympic Quota Places went to the Europeans. Daniel Brodmeier from Germany won the silver medal, Yury Shcherbatsevich brom Belarus – the bronze, Sergey Kamenskiy from Russia finished on the 4th place and Macro De Nicolo from Italy – on the 5th. In Team Classification Belarus was second after China, while Serbian trio got the bronze medals.

In 25m Pistol women only Renata Tobai Silke from Hyngary managed to break the dominance of the shooters from Asia. In a dramatic Bronze Match she beat Jo Young Suk from DPRK 10-8 after two series of shoot-offs. Stephanie Tirode from France who finished on the 5th place also won the Olympic Quota Place. Monika Karsch from Germany was on the 6th position, Antoaneta Boneva from Bulgaria – on the 7th and Sonia Franquet from Spain.

The 50m RT Men Junior event was won by Mika Kinisjarvi from Finland. Jesper Nyberg from Sweden was the second, Heikki Lahdekorpi from Finland – the third.

The victory in the 50m RT Mixed Men Junior event went to Heikki Lahdekorpi, Mika Kinisjarvi was second and Benoit Germain from France – the third.