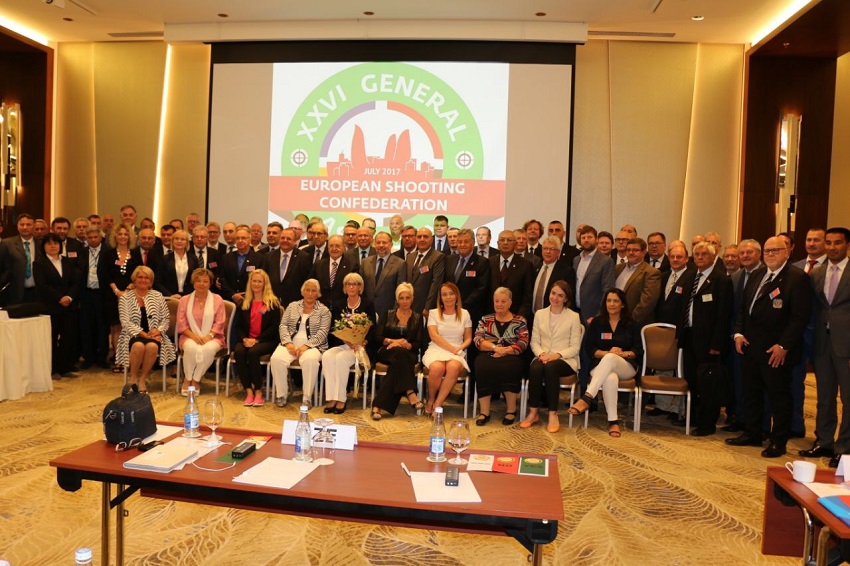 Vladimir Lisin from Russia has been reelected President of the European Shooting Confederation for the third consecutive term. It happened during the XXVI Ordinary ESC General Assembly that took place in Baku, Azerbaijan, during the weekend. Delegates from 45 Member Federations of 41 European countries participated in the biannual meeting of the Confederation.

“It is very positive that the General Assembly is attended by so many participants, because we are going to take important decisions that will determine the future of our Confederation and the shooting sport”, mentioned Vladimir Lisin at the opening of the General Assembly.

The Agenda contained many different items. Among them were several activity reports and presentations, approval of changes in the ESC Statutes and General Regulations as well as of the updated Guidelines for the Athletes’ Committee and Auditors’ report. Besides elections of the new Presidium the hosts of the European Championships in 2020-2021 had to be determined. All relevant documents including Presidium’s report, Treasurer’s report and Balances for 2015-2016 were published on the ESC website two months before the General Assembly and were unanimously approved by the delegates.

Pekka Kuusisto from Finland was reelected Vice-President. The other two ESC Vice-Presidents are now Yair Davidovich from Israel and Petros Kyritsis from Cyprus. The new ESC Presidium is completed by Wilhelm Grill from Germany, Alexandros Dimakakos from Greece, Biserka Vrbek from Croatia, György Nagy from Hungary, Anna Leshchikova from Russia, Ernfried Obrist from Italy, Tamaz Imnaishvili from Georgia and Christina Åhlstedt from Sweden.

Kerstin Bodin from Sweden, one of most respected members of the European shooting community and a long-time ESC Vice-President, was awarded the rare distinction of the ESC Honorary Member.

In the end of the General Assembly the delegates suggested to have a special meeting before the ISSF elective General Assembly in November of 2018 in order to identify the strongest European candidate for the ISSF Presidency and support his candidature during the elections.