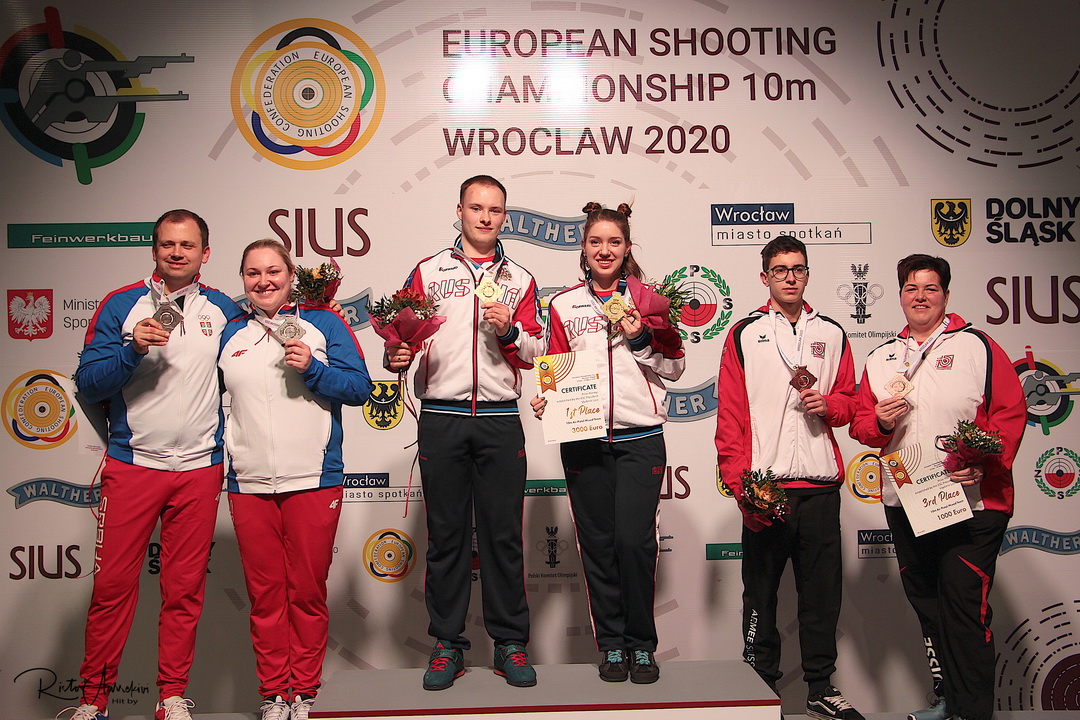 To reach the place from the Qualification 1 stage to the second stage is not so easy when there are 42 teams in competition. You have to solve the two hard competitions before you are in Medal Matches. All this happens in one day, but this is sport. You are training for that and for the success on a right time and place.

To the gold Match finally solved their ways Russian Federation Team 1 and Serbian Team 1 too.

Russian Team will meet Serbian Team 1 who has also very experienced athletes: Zorana Arunovic and Damir “the Dominator” Mikec. Russian was the better in the Qualification with result 391, Serbia’s result was 386.

Russian Team’s victory came absolutely after hard work. In the beginning it looked like Serbia takes the victory when they were leading 6-0. But after 7th pair of shots Russian team now leading. The Match continued as tight as it can even be. The situation was changing dramatically in the 15th shot when Serbian Damir Mikec shot excellently 10.9 and the situation suddenly equal 15-15. The last pair of shots will decide the winner and Artem Chernousov climbed as the hero of the match hitting 10.7, Batsarashkina had hit earlier 10.1, when Mikec shot 10.0 and Arunovic 9.8. So the European Championship travelled finally with score 17-15 to Russian Federation.

In Bronze Match met Switzerland 1 and Hungary 1. Swiss consisted of yesterday’s silver medallist Heidi Diethelm-Gerber and her pair is Janson Solari. In Hungarian team competed one of the Hungarian new stars, multi talent Veronika Major and Miklos Tatrai. The Bronze Match ended as dramatically as the Gold one. Heidi Gerber was the heroine of the match by shooting 10.8 into the last shot Janson Solari had shot earlier 10.2 and when Veronika Major hit 10.1 and Miklos Tatrai 9.9. Those hits were the dramatic ones while the situation before those equal 15-15. It meant that Swiss team won European Championship Bronze.